What is your CPU Utilization?

I am curious what the normal Core Server CPU Utilization is suppose to be. I have recently because of a DAC upgrade been up sampling to DSD256 and my server CPU process has gone up to a steady average of around 30%. Naturally when I up sample to DSD512 it then goes up to around 50%. 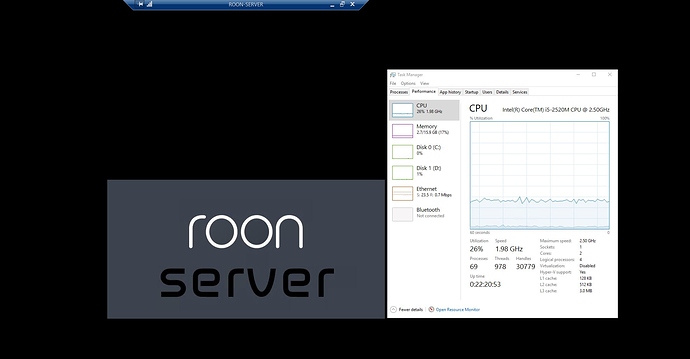 I no longer run Roon on Windows, don’t know what other measurements the Nucleus offers, all I look at is the Processing Speed indication in the Signal Path display. I think of this as a factor, invert it to get the load.

This is a Nucleus with the i3 processor.

I’m also not on a PC, however on an iMac I7 3.5 ghz chip with SS HD when viewing the stats from the Activity Monitor app in Utilities which tells you % CPU
About 5 to 9 % with playing 24/96 files.
About 12 to 20 % when playing DSD files
I can play all of my three zones at once , one playing DSD, and two playing 24/96 for example and it tops about 30% CPU usage.
I hadn’t looked at that till today!

Interesting to see that CPU usage is key if using DSD. With DSD, Anders estimates about 40% with an i3. I get about 30% with an i5 and Steve with a i7 is about 20%. Because of a recent DAC upgrade, I have just started using DSD up sampling at 1 location and I have to say that it is impressive, but if I were to move on to multiple zones which I intend to do down the road, then it seems that I will definitely need to up upgrade my core to a i7 if I want to implement DSD throughout.

I hadn’t looked at that till today!

Nether did I until this recent DAC upgrade. At first I thought that I might have been over driving my little server core. Now I know that I am on par. Good to know.