What is your favourite musical era and why?

For me the epicentre is 1976-1981 or thereabouts. I suppose this is because this is the era I was 11-14 and music was everything but then while still young I recognised as the time that things were going downhill rapidly as the 80’s progressed as I began to look towards other eras for my kicks.

76-81. So much freshness, punk, new wave, electropop, ska revival and even some good disco. And for me it perhaps the zenith of the art of recording, albums from the Police, Squeeze, Yazoo, Gary Numan, Costello, Specials nearly everyone sounding so clear and vital and a drum sound again that I don’t think has ever been bettered.

And for a few years we were back to albums being recorded in a few days rather than months or years.

It’s an era I constantly return to and it rarely disappoints.

So what’s your favourite era?

I find myself returning to late fifties, early sixties jazz over and over again.

I was 15 in the mid eighties. Hardly the most memorable period for ones formative years in music…

I love the eighties, listening to Marillion, The Mission, etc. But if I look at most played in Roon it tends to be 2015-2016. Enjoying Jack Garrat at the moment.

I’m with @Sloop_John_B on the era, but I’d extend it 1971-1981. I’m of a similar vintage, so grew up listening to my older sister’s Bowie, T-Rex, Steely Dan, Rickie Lee Jones etc. Loved Punk as much for the attitude as the music (at 14-15 years old, had to hide the dog collar from my mum!) and would agree on Costello etc. Completely hated the 80’s, new romantics, and that appalling big drum sound that destroyed many potentially decent recordings (Bowie’s Let’s Dance for instance) - production quality dropped like a stone at that point IMHO. So, I thankfully went backwards, and discovered Dylan, Tom Waits, Jazz (agreed @RBM), and Blues, so the 80’s weren’t completely wasted! Was a minor blues revival at that time, which enabled me to catch some of the greats (new & old) who decided to tour the UK. I always look to the 70’s for decently produced content to demo hifi kit - Steely Dan’s Aja and the first Rickie Lee Jones album really reveal what the kit is capable of. Woke up again to “new” music when grunge came along, and people were making a proper noise again with guitars, ditching the cloaks & synthesisers.

@Sloop_John_B…bingo…I’m with you. 78-84…music was a massive teen influence at that time. All the early electronica…Numan, Depeche, Ultravox, Mission plus many more. But my tastes were and are very broad and I cover most genres hence the crazy library.

Its very age dependent isn’t it ? I am in that mid 70s-mid 80s thing. I’m from the UK originally and it seemed that punk/new wave was taking over the world. I was also at that age when new music discovery is at its peak. That said, I am one of those awful Dylan obsessives so in his case it stretches back to the early sixties and up to last week

I’m strictly post 500 BC. It was all rubbish before then.

Edit: Actually 433 BC to be more precise.. More on the bells
here. and here. 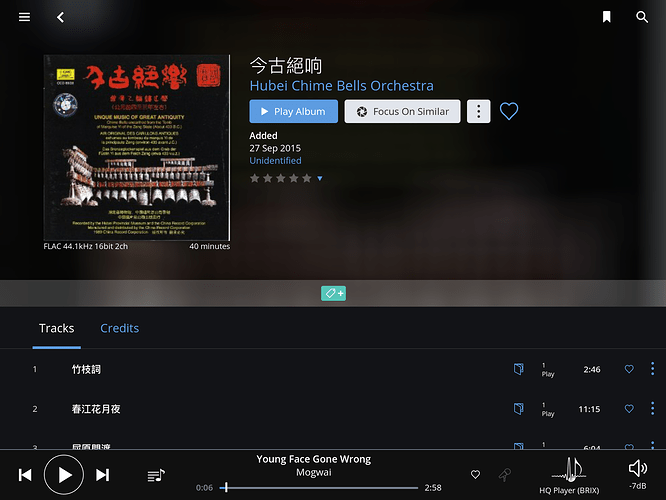 ) from pop/rock to electronica/dance, Indie, although lots of other ones hold good memories.

I’m discovering a lot more music in the last few years, both present and past. Got more into folk/jazz especially ones with electronic infusions, and can see myself exploring more jazz when I’m in the mood. Would love to get into classical but bar a few hero ones it’s never really happened.

For any mainstream musical genre that existed at the time (so excluding rap, say, and with the possible exception of archetypal Bill Haley type rock and roll) it’s likely the accepted classic tracks and/or great recordings in that genre date from the 70s

We have many great musical era’s if you follow the progression from African roots (Not considering classical music here although many classical music lovers were probably slavers having an unconsidered impact on early roots music) common folk music from all nations and each is as important as the other.
This is an evolution where we have the privalidge to go back anywhere in fairly modern times retracing the various threads or blood lines and enjoy them even though we filter them through our modern ears.
Young people today cannot know the impact ‘Heartbreak Hotel’ had on release.
However, the time is now! We are at the top of an evolutionary tree and if you get away from a lot of the mainstream you will find some of the best live music touring the world today. The live scene is vibrant and exciting and bodes very well for the future. Support live music, buy the CD’s and get in on the ground floor where the passion lives…

Clearly the 60s were the best era for music. Especially '67-'69 and the summer of love. It was a time of change and revolution. The 70s just took that further forward and in the 80s they began to cash in.

I keep discovering great new stuff. At the moment I’m listening to Rhombal by Stephan Crump, which was released in September 2016. His next album is scheduled for release February 17. It may not be my first 2017 album…

“Now” extends to this century. This millennium, to be more forward-looking.

Yes, I had a good time partying in the 60s but that music doesn’t hold up for me.

September 2016, the Crump release, is when I retired. I can now didcover even more new stuff.

Without a doubt my favorite era is early to mid 80’s and specifically the new wave movement coming out of UK. To this day, my favorite bands are the Smiths, Siouxsie and the Banshees, Style Council, Bronski Beat, Jesus and Mary Chain, etc. I have so many memories of the local radio station (KROQ), pegged paints, Doc Martens, rayon shirts, etc.