What makes an Artist a Roon Artist?

As usual, I start writing this new topic in a state of pure bewilderment at the fact that a seemingly very simple problem can turn out to be such a complex issue…

Let me describe the problem at hand. I have the following album in my library: 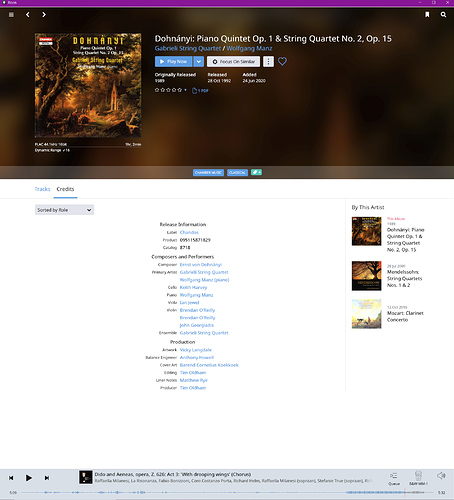 image1921×2111 682 KB
The album has been identified by Roon.
The two violinists named under “violin” are of course one and the same, but there is a small difference in the spelling:

The Roon artist O’Reilly is spelled with a closing quotation mark (which is wrong!) while in my tags his name is spelled with a straight apostrophe.
I thought this would be only a minor challenge that I could defeat in a minute. Little did I know…

In my optimisim I thought that renaming the Roon artist O’Reilly to its correct spelling would solve the case. But after doing just that I got stuck with two identically spelled artists:

In an only mildly less optimistical mood, I thought that merging these two artists would solve the problem, but… I simply can’t find any Brendan O’Reilly under Artists!! 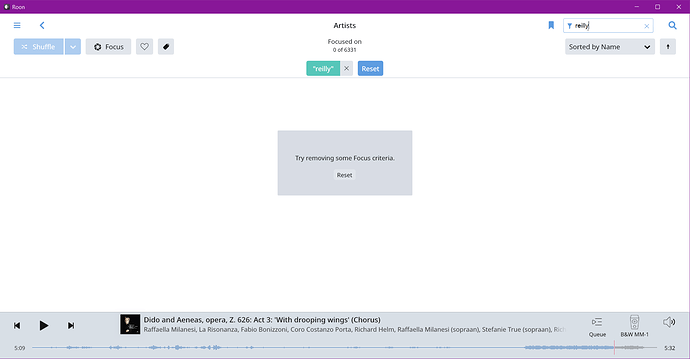 image1919×999 63.4 KB
Then I thought that perhaps only artists with birthplaces and years would be named under Artists, but not so. Perhaps if I took the trouble to give Brendan O’Reilly the status of “Primary Artist” in the track credits of the aforementioned album? No effect.

So now I’m stuck. Why can some artists that are listed under Track Credits be found under Artists while others can’t?
And how can I fix the double persona problem of Mr. Brendan O’Reilly?

(And by the way, @dylan, I still can’t use the name prokofiev at the start of a search string!! Is any progress being made with that issue?)

Perhaps if I took the trouble to give Brendan O’Reilly the status of “Primary Artist” in the track credits of the aforementioned album? No effect.

This is exactly what I do when I want to merge artists that are not showing up in the artist editor. For example. I have 3 Brendan O’Reilly’s in my library with variations in the apostrophe. I can add all 3 as primary artists in the album editor: 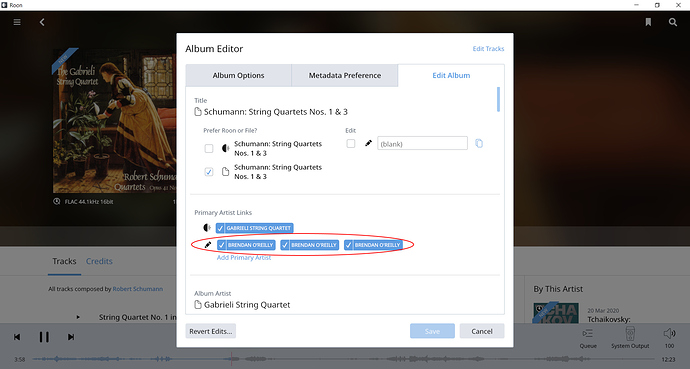 They then show up in the artist editor where I can merge them: 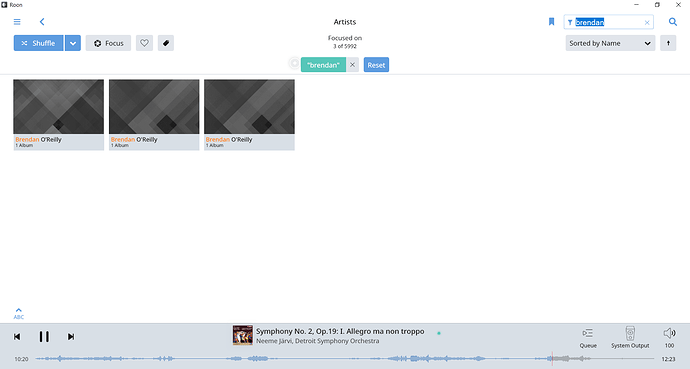 Brendan O’Reilly is a relatively common Irish name so you have to be careful to merge only the Classical Violinist ones.

You will soon tire of making requests for explanations or resolution of issues of this nature. They’re genrally ignored, either because Roon don’t know the answer themselves or because you’re a lone voice in the wilderness wanting issues like this resolved. My impression is Roon are happy to live with bugs that go undetected by the point and play crowd.

My impression is Roon are happy to live with bugs that go undetected by the point and play crowd.

I’m sorry, but this is not a bug. There are several spellings of the same artist in MB and ROVI. And there may still be another spelling in your tags.

The rest of the situation as described considered normal then

Thanks, Tony @tripleCrotchet! As usual you can be trusted to come up with a working solution. Once more you’re the ‘workaround’ guy to turn to.

Perhaps I should explain why I was almost but not quite succesful before: As I wrote, I added Brendan as a Primary Artist on track level where I should have done that on album level. Doing the latter finally enabled me to merge both Brendans into one, now also showing the correct spelling. I then removed Brendan as a Primary Artist from this album and now (logically) he is also gone from the Artist gallery.

Which brings me to ask Roon, for the second time, why it is necessary to ‘elevate’ an artist to the ranks of Album Artists before you can find him/her under Artists?

As it is, thousands of “track artists” cannot be found. At least not in a centralized way.
Perhaps the existing page called “Artists” should be renamed “Primary Artists” or “Album Artists” (I would prefer the latter) and an additional page called “Track Artists” should be created. These could of course also be merged into one page having a three-position switch at the top of the page to enable searching for album-type artists, track-type artists or both.

The “Artists” page contains only the primary artists of your library.
All the other artists (performers on a track, etc) can be found using the search function (top right of your screen).
This is the way it works. If you have another proposal, feel free to add a post in the “Roon Software”>“Feature Requests” section.

Why can some artists that are listed under Track Credits be found under Artists while others can’t?

As mentioned above, the only artists that show in the browser are the primary artists of the albums that exist in your library. We don’t show every artist from every credit here by design.

And how can I fix the double persona problem of Mr. Brendan O’Reilly?

I’m glad that @tripleCrotchet’s suggestion here worked for you. In addition to your manual fix I’ve submitted a ticket to our team to better handle cases like these where slight changes in spelling from our metadata sources are causing duplicates.

In addition to your manual fix I’ve submitted a ticket to our team to better handle cases like these where slight changes in spelling from our metadata sources are causing duplicates.

Hi @dylan,
I think that as long as secondary names (“a.k.a.”) is not properly handled in one database (let alone when merging two databases + tags) the only solution remains the manual merging (that is, the manual “a.k.a.” definition). I have artists which have 10-15 (or more!) different spellings between their original non-latin names and their latin counterparts. I doubt that the Roon team (or any team, for that matter) can come up with a definite solution to this. Anyway, good luck!
PS: The existing solution is as good as it can be. I think we only need an additional “advisor” option for detecting duplicates and letting each user decide what to do about them.

I think we only need an additional “advisor” option for detecting duplicates and letting each user decide what to do about them.

I second this motion!

In addition to your manual fix I’ve submitted a ticket to our team to better handle cases like these where slight changes in spelling from our metadata sources are causing duplicates.

Good idea! But please make sure that the software catches the “easy ones” first, which implies eliminating each and every case where a closing quotation mark is used instead of an apostrophe! The O’Reilly’s, O’Riley’s, O’Leary’s and their Irish brothers in art will be most grateful!

BTW. After “artificially” creating “primary artists” in this way for the purposes of merging artists you can then just delete unwanted ones them from the album editor to avoid unnecessary screen clutter. The merging of artists in this way is sticky in your personal library.

@dylan
Duplicate Release Dates, Duplicate Artists - it all originates from the somewhat dubious concept of throwing metadata from numerous providers in one big pot, stiring it around and throwing the output at us stunned users.

How do you possibly expect a meaningful outcome from such strategy?