What on earth is needed for DSD on Roon?

So having a little play around with DSD sampling on Roon. My server is running an i7-10710U consistently running at 3.6-3.8Ghz with 32GB Ram. Yet enabling DSD I can only get 128 to work - just - above 2.0 processing speed. The CPU isn’t overloaded and single core performance is actually better than multicore.

It’s not a compatibility (upto 768 is supported) thing as 256, 512 work at very slow processing speeds and dropouts.

What is needed? What is it there if unobtainable?

show us a screenshot of your signal path 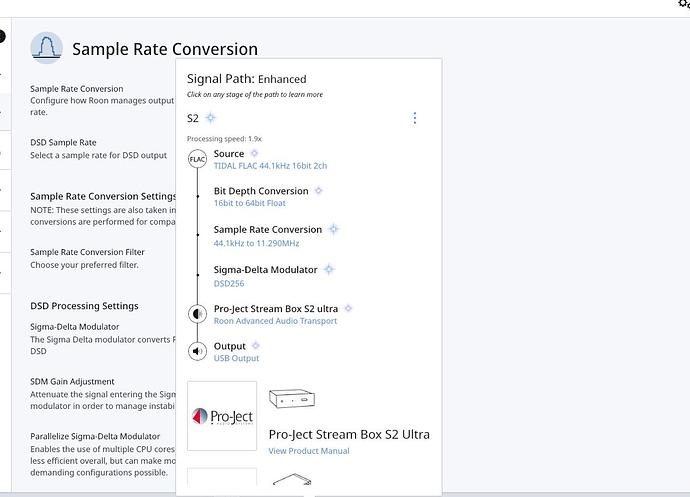 The final device is a matrix audio DAC that does detect the DSD correctly.

Is “Parallelize Sigma Delta Modulator” on?

Are you running with a CPU Fan or in a fanless case?

1.9x is pretty reasonable for DSD256 on that box if you don’t have the setting on or if your CPU is being throttled due to heat.

There doesn’t appear to be any thermal throttling CPU is a pretty consistent ~3.7-3.9GHz.

Having a further play it does seem the jump from 256 -> 512 network demands are increased, an initial demand to ~60Mbps - 80Mbps settling to ~35Mbps but peaking again to 60-80Mbps. At this point I’ll hold my hand up in shame saying I’m running a homeplug to streamer, so let me move the server to local connection next to the streamer, though would this impact on the processing speed? 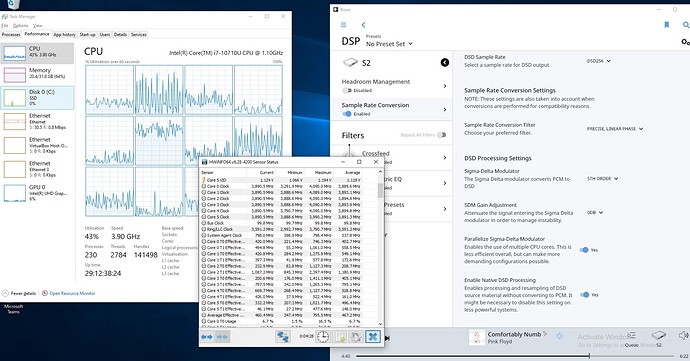 You shouldn’t be getting dropouts until around 1.0-1.2. My guess is your network is having issues. Try avoiding the homeplug and see if that helps.

Hey Robin, i wouldn’t worry to much over these low processing speed figures. I see similar figures on my Gen8 Intel Core-based Roon Servers.

Start up your MB manufacturers power monitoring, you will most likely see that the Core is nowhere near maxing out, merely idling away.
The power throttling on newer Intel CPU’s is very effective, and it’s not always it shows from Windows activity monitor.

DSD 512 - very few PC’s can directly convert to it without issues And if you are doing any additional processing, it’s very unlikely to work.