What order of priority are Roon's sort fields?

So, I have my albums sorted by, say, Artist.

After that, what does Roon look at when sorting all the albums by one artist?

I’m having a problem with it because I would expect the next field to be the album title, but it’s not sorting the albums in order by title & I’m not sure how to fix it or how to predict Roon’s behaviour.

As you can see from the screen shot, I start my album names with the release date & some of the 60s albums are sorting after the 80s albums. I just can’t figure out why. There are no spurious ID Tags that I can find. Any thoughts? 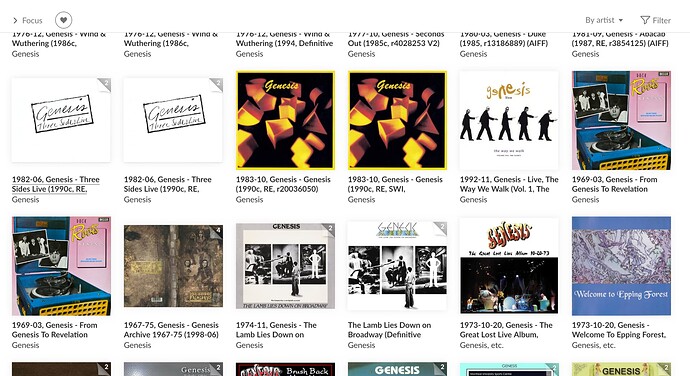 I just can’t figure out why

I would start by looking at the meta-data and Release Date. Sometimes re-issues will get the release date of the re-release instead of the original release.

I’ve stripped out all the meta-data apart from the stuff I want in there, and I’ve set Roon to use only the meta-data in my files & nothing of its own.

I’m not sure if there’s anywhere else I can set Roon to not add anything or do anything with my files but if there is, I can’t find it.

It must be something that I’m doing wrong, but I’m blowed if I can figure it out!

Since you just show the album page, we can’t help you review the meta-data that Roon is seeing. You need to go an Album, click Edit, click Edit Album, and compare the data Roon has in the Original Release Date field. Like so… 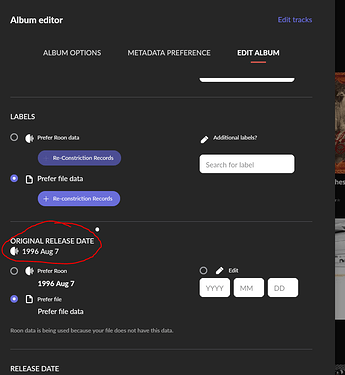 Look at that field on one of the Car albums and see what it has in it vs. the 77 April live show.

Okay, that makes perfect sense. Thank you. Unless I go in & specify an original release date, Roon is using its own information, which in some instances is incomplete. Now that I’ve done that for the PG albums, they’re sorting correctly.

Since I’ve gone to the trouble of naming my thousands of albums very precisely to include the original release date & the release date of each particular release in the album title, I would much prefer to switch all that off within Room & have it look at the album artist/artist first & the album title second & ignore anything else, but it doesn’t seem to want to do that.

If I’m to continue using Rune, this is going to be an extraordinary amount of unnecessary extra work.

So you are using the Title to signify the Release Date, rather than use the Release Date metadata field in the track files? Roon doesn’t expect to find Release Dates in the Album Title field, so it’s not going to work for you.

I’ve come to Roon from iTunes, which firstly only had a year slot for the release date, which was no good to me but also which, if that year was left empty, defaulted to the album title for its sort order.

In order to make my albums sort how I wanted I would put the release date first in the album title. The added bonus was that I could use exactly the same album title in the finder & in the software & everything would match perfectly.

It would also sort by artist first & then (in the absence of a release year) album title next, which worked well. It would work well in Roon too, if I had a choice over these settings.

This is how the albums look on my hard drive: 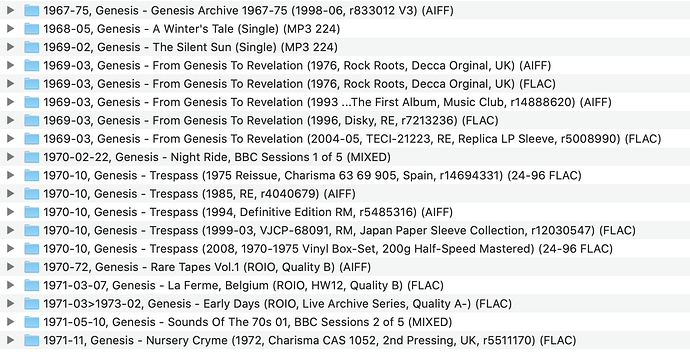 I love it! It’s perfect!

Actually, there is a lot more to that story & I won’t bore you with it. I can still keep the folders on my desktop named like that & have the information put into Roon properly. It’ll just take a bit of time to adjust. I appreciate all the input. Thanks.