What's going on with Roon's "Most Played" albums? 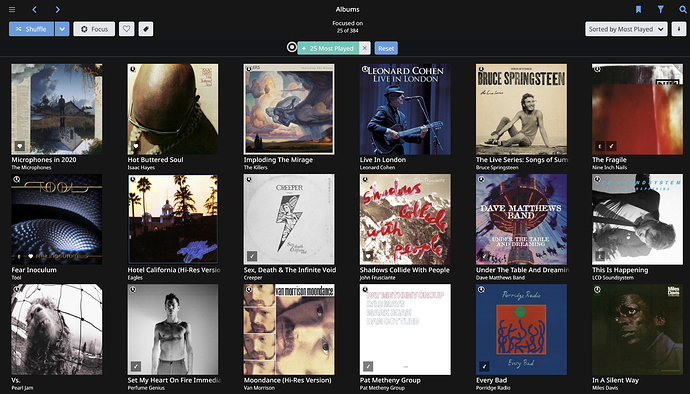 I’m fairly new to Roon, so bear with me.

It’s based off total time so if you listened to a 2 hour opera cd once, and a ramones 30 !minute album 3 times, the opera cd will be most played over the ramones

Thank you for clearing it up. That said… why!? How does that make sense? Most Minutes Listened != Most Played, at least not to a human.

Can’t answer as I’m not a Roon employee and don’t have that info. I will say i argued that criteria years ago.

My opera example is indeed the one I used since it bit me. I played a 4 1/2 hour wagner opera once, and was shocked when it was higher ranked than albums I’d played multiple times.

It took awhile to knock it off the top slot, lol.

I guess it makes sense, time spent listening to a particular album could be considered the most listened to, it’s just not intuitive or what a person would expect. Generally, if you really enjoy an album you listen to it repeatedly and that would make it “Most Played”.

It’s the reverse to how Last.fm sees things, which always irked me. If for instance you listened to an album with 6 tracks on it 3 times and an album with 20 tracks on it once, the top artist and album would be the 20 track one. This to me also seems counterintuitive so I think I prefer the Roon logic. I guess no system is perfect (unless you could specify in settings how it would work!)

I wanted to confirm that this is expected behavior, please see the following thread for more information:

Dear all, Even after the latest update (build 200) my playcount of most played albums is still all over the place, both Tidal and own albums. Has something changed regarding calculation or am I missing something? Thx

Thank you @noris, while not intuitive the explanation and methodology does make sense.