I would think it would be adding an AirPlay device to an input, so maybe $99? People who have been following along my saga of Roon and AirPlay may understand. Wonder if a chromecast audio puck would work.

I think you are referring to this thread ?. If so, the mR is a (very good) Roon endpoint. Why do you need another ? Is it for a different room ?

Chromecast Audio is not yet supported but is on the map. The very cheapest endpoint is probably an Odroid C2 running Roon Bridge.

I’m eagerly awaiting the implementation of the Chromecast puck as an endpoint. It is a remarkably cheap, effective and reliable device that deserves to be a big success. I really hope it will be implemented in the next update. Tidall have recently absorbed it into their ecosystem and I’ve just set it up for my father in law. He said he will try Roon if it becomes an endpoint.

Hey Andrew, thanks for chiming in. I was thinking of the 40-odd powered speakers I have lying around my house, and trying to set up some outdoor music with powered speakers. I have three of these, a small, medium and large:

They’re awesome looking, and have a remarkable sound. The littlest one will almost blow my neighbors away, and the biggest one is equivalent to a Marshall stack amp turned to 11 (not that volume is my only goal but when one loathes one’s neighbors then all is fair in love and war.) The bigger ones have an optical input as well as 3.5mm jack and RCA inputs. I could make it work now with an airport express I suppose, but as you point out I’m not really convinced on the whole “I’m avoiding AirPlay” thing.

Just throwing it out there.

I have both a microRendu (home office headphone system) and a Sonicorbiter SE (feeding a USB>S/PDIF coax converter into my living room Bel Canto C7R DAC/amp). The microRendu is a bit more refined, especially with a good linear power supply (Teddy Pardo in my case), but the much cheaper Sonicorbiter SE is no slouch, and it has optical S/PDIF out that is convenient when you don’t need the utmost in signal quality.

Raspberry Pi with a HiFiBerry board if you need RCA out and an external USB battery such as the ones for charging phones. Decent sound for under $100.

If you only need USB out, You can get a RaspberryPi for about $50. Just got one this weekend and it handles both Roon and HQPlayer for 1/10 of what a microRendu costs.

That said, the Pi isn’t as plug-and-play as the others, but that wasn’t the question.

I guess my point is that there will be very shortly a market for very inexpensive Roon endpoints in which the audiophile quality isn’t as critical as when we’re listening with the bazillion dollar headphones on.

Audioquest would be my first choice for a plug-and-play Roon ready usb device. They could call it the parasite

Audioquest is a good call. I’m sure Rankin would be interested. He s such an innovator. Roon on the move?

Well, I tend to use old Android phones as quick and dirty portable endpoints for powered speakers. Just load Android Roon, uncheck the Private output box and plug the powered speakers into the headphone jack. Bingo.

This is the speaker I had in mind. It has an optical input, so I guess I could use an Airport Express and a toslink to optical cable, or get a sonicorbiter and go optical to optical. As you can see this also does bluetooth but I’m trying to avoid that.

Stanmore’s classic design is a throwback to the golden days of rock ’n' roll, and its analogue interaction knobs give you custom control of your music.

CuBox and Pi/Digi+ have optical out. Also this Odroid and shield.

Excellent. I’d also love to be able to use my USB DACs and headphone setup. I’ll have to think on that one a little bit. Perhaps an android phone with micro USB out?

This $7.99 nanopi endpoint has to be the least expensive. Chris reported problems with 352kHz and 128DSD but fine under that.

What do people do with these sorts of things, find some sort of plastic enclosure, or do they get too hot and need to be exposed? Seems to me if it was exposed dust would short it out. Thx!

On the site linked in Chris’s review there is a heat sink that can be attached. No doubt there will be cases in due course. I think this became available on 6 July or thereabouts. Until then, a matchbox ?

Yes, preferably with the matches still inside :).

So, this Marshall amp with an optical input and a currently nonfunctioning bluetooth. My plan is to add a DIY RoonReady module. Since the amp does have an optical input, we need an optical output. I could tape an airport express on the top, but I’m sure you know I’m past that at this point. I’d like to have a wifi to ethernet adapter with an external antenna, then ethernet to the myriad devices you mention above, (still have decided which one) and then optical digital out to digital input. I guess there’s a DAC inside this Marshall speaker, so we’ll get beyond that for now. Those things sound killer and I suspect it would be a major pain in the ass to replace the DAC, unless there’s a box on the inside that says “DAC, remove me.”

Do you guys have any recommendations for a wifi to ethernet adapter? External antenna and the smaller the better.

And then get a wifi to ethernet adapter like this: 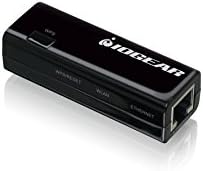 Enjoy the freedom of Wi-Fi connectivity for any of your Ethernet enabled devices at home or in the office with IOGEAR's Ethernet-2-WiFi Universal Wireless Adapter. This is the ideal solution for devic ...

Do you think I can connect it to the optical input on the Marshall speaker and make it work as a Roon endpoint?

Also, I’m a little unclear if I need the digi + AND the raspberry pi, or just the digi +

The Digi+ sits on top of the Pi, you need both for optical output.

Never used a WiFi-Ethernet adaptor. Looks expensive compared to a WiFi USB dongle like this.. You can get them with an external antenna also.

The Pi3 has built in wifi which has worked well for some users.