Whats's the metadata trigger to sort albums as "Versions"

I am trying to understand how Roon determines, whether two albums are “Versions” of each other.
I have a lot of albums where Roon thinks they exist as multiple versions, where in fact it is just the same conductor rerecording the same work…
I’d like to prevent that from happening. Maybe a special way of maintaining my file tags could help? 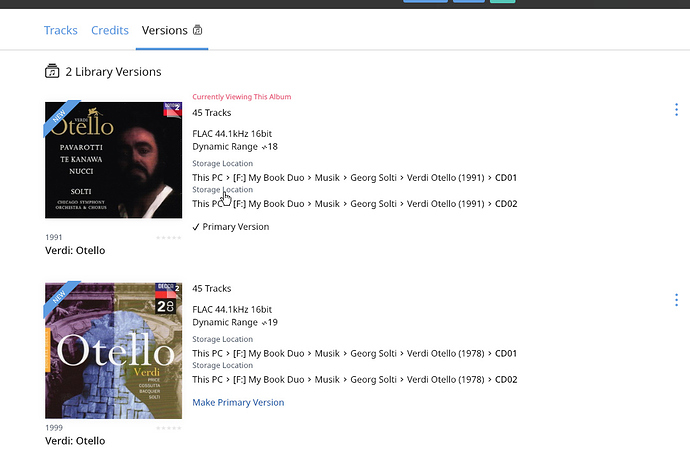 These are not Versions of the same album, since they have been recorded at different times with different artists.
How does Roon determine them to be Versions?

These are two different albums with different metadata. Based on what information does Roon consider them to be duplicates? Please don’t tell me it’s only the album name…

When navigating to the Composer and checking for recordings of the work, I see only this

This can’t be right

That’s an easier one to answer!
Settings > General > Show hidden tracks and albums. Set to yes.

By default, Roon only shows the primary album is its listings.

Based on what information does Roon consider them to be duplicates? Please don’t tell me it’s only the album name

It’s when they are “similar”. See this KB article

Now, what does “similar” mean?

That’s an easier one to answer!
Settings > General > Show hidden tracks and albums . Set to yes.

Ah - forgot about this one. I had set this in the past, but I have had moved my library in the past and did restart with Roons “initial” settings.

Now, what does “similar” mean?

Obviously it doesn’t mean: do a sanity check against our own dataset.

Since allmusic is able to distinguish between the two recordings I’d bet they are both also in the Roon dataset. So before deciding that two albums are just versions a check should take place if the metadata speaks against this. In other words: identify before deciding on versions … 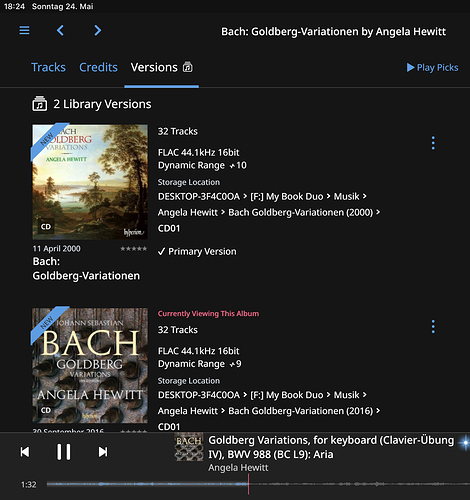 and Roon is still not correct… These are 2 different recordings again.

The setting doesn’t affect whether something is a version or not, but it will affect that display of the recordings of the work.

If you wish, you can remove the connection by using the 3 dots to the right of an album in the versions tab and selecting remove from duplicates

Again, it seems like Roon could have made the (dis-)connection if it would have checked within its dataset. Allmusic knows of both recordings.

I know how to manually remove the albums from the duplicate list. I just thought with the earlier Otello example that they disapeared as duplicates after setting the switch, with no manual intervention.
But I may be wrong.

Can you share a screenshot of Settings > Library > Import Settings? 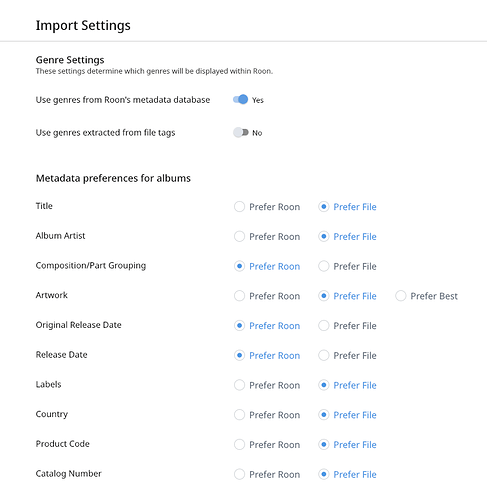