Where Do Edited Track Titles Fit In to Roon Scheme?

Shouldn’t EDITed track titles trump both Roon and File versions (there isn’t an option to prefer edited)? It isn’t here in the Now Playing ribbon. Note the A3 was edited out. It’s still showing the File version.

On the same album, I also added “in D major” to each track title, making it “Symphony No. 1 in D major: xxxx”. But the “in D major” appears nowhere on the page. Shouldn’t it? I’ll add that the composition wasn’t recognized until the key was added, but it could have merely been the passage of time. And, to make the point, should we be permitted to add and show even trivial changes, e.g. “…this is my favorite movement”?

One of the good people at Roon said (paraphrased), “Owner’s manuals shouldn’t be necessary. If the software isn’t intuitive, we haven’t done our job.”

I’m going to assert without proof (a common occurrence in the community) that in the field of tagging, intuitive software is an impossible task. But I wish you well in your pursuit of this lofty goal.

In the meantime, could we have owner’s manual (feel free to rename) that unlocks mysteries such as these? I’ll agree to tear up my copy once the intuitive goal is reached.

If you edit the Track Title in Roon, it will show that Title. If you change the track title in your file tags, then you should go to metadata preference and choose Prefer File under Track Data

As the song goes, “t’ain’t necessarily so.” Both were examples of edited track titles in Roon.

Very hard to know exactly what is going on, but be aware of the difference between track titles and individual parts of performances of compositions: they are different.

Joel, oblique statements such as yours are hard to parse. To be clearer, I changed each track title, in Roon, one at a time, to read “Symphony No. 1 in D major ‘Titan’ :…” at their beginnings. I just rechecked. Here is the screen showing said symphony: 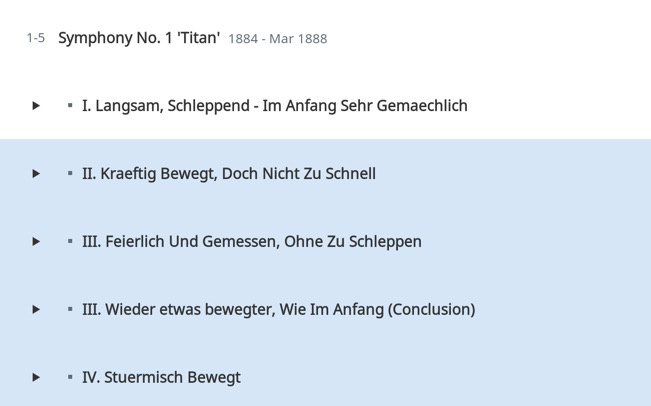 So, as I said, from where I’m sitting, the Roon logic ignored my “in D major” edits on the main screen and “A3” edit in the Now Playing ribbon. If I’m missing something, please enlighten.

Here’s one track’s edited track title. Others were treated the same way. To ensure consistency, the work title was copied once and pasted in to the remaining tracks.

So, as I said, from where I’m sitting, the Roon logic ignored my “in D major” edits on the main screen and “A3” edit in the Now Playing ribbon. If I’m missing something, please enlighten.

It didn’t ignore your track edits. This is clearly an identified album and what you are looking at is a multi-part performance of a composition/work. Those are part names which are coming from Roon metadata in the Cloud; they are not Roon track titles.

If you wish to override these, you will need to either unidentify the album (so that the part names are “munged” from the track titles), or use the WORK/PART file tag mechanism with Prefer File for the album’s Multi-Part Composition Grouping preference.

If I was not editing a track title, then WHY oh WHY does the Roon window read, “Edit Track Title”? And why would Roon have “A3” in a track title? To get rid of the unhelpful LP track labels, I deleted them! Imagine that. And you’re telling me I didn’t edit the track title in Roon’s Edit Track Title window???

Actually, the screen I was using to perform, well, whatever I was doing, is clearly labeled, “Edit Track Title” I was editing five parts, one at a time, at the track level.

And by the way, the album is unidentified. So, how do I unidentify an album that’s not identified?

I know it’s a fudge, and only a part one at that, but could you fix the D major part by editing the composition title?

If Composition is a Tag in John’s metadata

I added Composition as a custom tag, as it’s not a stag mp3 or flac Tag

If you can add the D minor to the Composition tag and then “ prefer file” for the album ?

If Composition is a Tag in John’s metadata

No, I mean the name in the database. 3 dots, go to composition, edit, change name.

That is strange. In my roon that Mahler 1 is already formatted as “D major” at a composition level. So in principle if the performance has been identified no further edits by @John_V should be required to get what he wants: 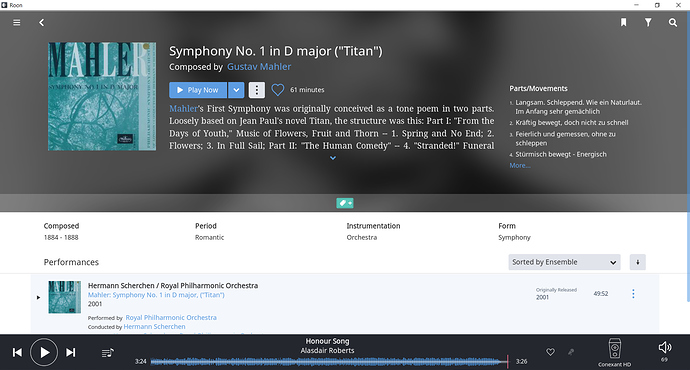 Having said that I also have an experience similar to what John is describing on a very regular basis. I find it very unpredictable whether roon will use my "performance title or whether it will use it’s own composition title. I cannot see any pattern. Sometimes I am happy with this because although I want the different performances grouped I may want to distinguish in my title that it’s a guitar transcription of a cello sonata (Bach) or its a choral transcription of a violin quartet (Barber). But sometimes I do want a uniform title. I just cannot see how I can control that and why sometimes roon will over write with it’s composition title and sometimes it will leave my titles unchanged but still group the compositions.

Update: after my mysterious walkabout with Roon last night, it and I had a good night’s sleep. I looked again at the subject composition and, lo and behold!, “in D major” has osmosed into the title!

And the vinyl track numbers have vanished from the Now Playing ribbon (not shown).

So, what did we learn from this?

Track title edits ARE considered…eventually. Roon did not immediately respond to my requests to Rescan, ReIdentify, or ReAnalyze (BTW does anyone else find these distinctions subtle at best) Tracks or Albums. But sometime between 30 minutes and 8 hours later, it did do the job. Whether it was at my behest or not, I’ll never know.

So, as a User, how is one to know whether an edit was successful in the future? Is “wait and see” a good system, or is there a better way? Giving immediate feedback comes to mind. Or, Roon could provide a document giving detailed insights into how things work so as not to drive users bonkers.

P.S. The recognition process giveth and taketh. Gone are the single quotes around Titan that I entered five times. But hey, I got the key, so that’s something.

I just tried editing an album title in Roon and the change took effect right away. I’m not sure why it took so long in your case. Maybe editing album titles and track titles are handled differently some how?

Saturn, all of my changes above were track titles. It doesn’t seem to me that album titles play a roll in IDing. It may be a starting point for the search. Dunno. Without access to its underpinnings, Roon IDing is a black box.

You are partly correct, IMO. Roon often recognizes changes immediately, particularly if the changed track hasn’t yet been IDed as part of a composition. But not always, not always predictably.

And that’s my point.

Right now, I have another Mahler Symphony, whose album and only composition are unrecognized (vinyls are often a problem). I just added “Symphony No. 1 in D major” prefix to the four movement track titles. No change. But I’m betting Roon will “get around to it” sometime. I’ll wonder in the meantime. Sigh…

I think I now get what you are saying. In the below example if I edit a track title, such as track 1 Fanfare for the Common Man, the change is immediate. However, if I edit part of a “work”, such as Buckaroo Holiday, it doesn’t change. 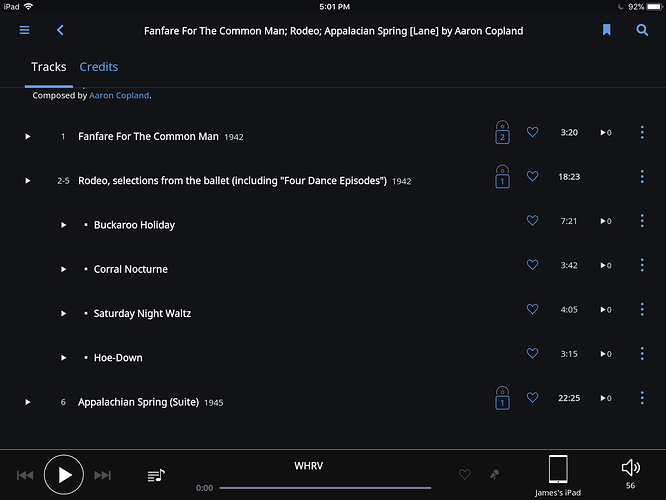 Am I understanding correctly?

The interactions between normal titles, meta data preferences and composition are not straight-forward, which is why John was asking for a better description of how they interact.

For example, below is a screen shot, I edited the Track Title in roon to Fear me. The Track is still showing as Allegro in the composition, but the currently playing is pulling the updated track title and displaying Fear me. It would make more sense if they were the same. 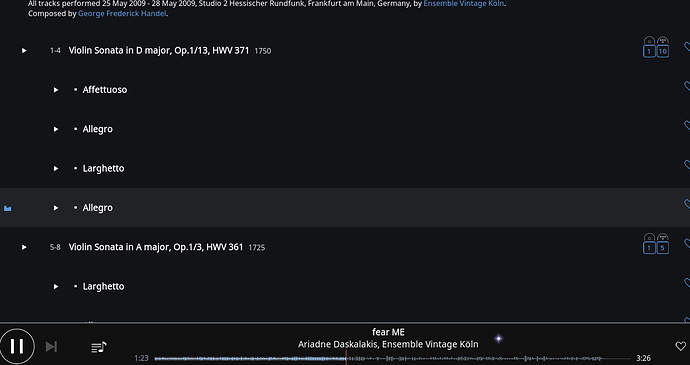 We write as one! Thanks for the additional examples, Daniel and Saturn.