Where does “Performed By” on tracks come from?

I’m trying to figure out where the “Performed By” notation on a track comes from. 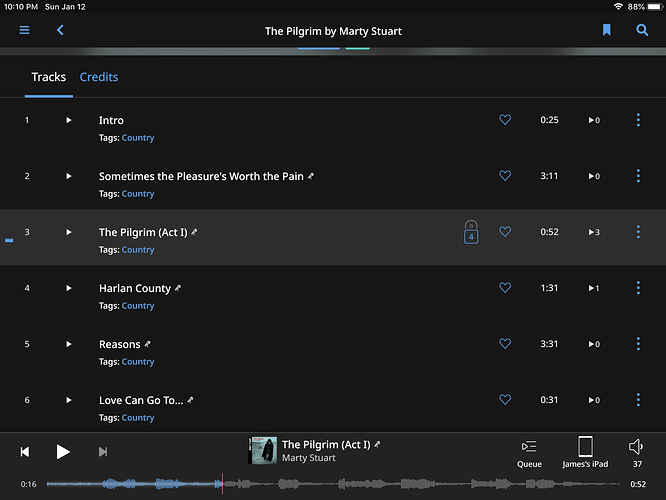 The guest performers do show in the credits 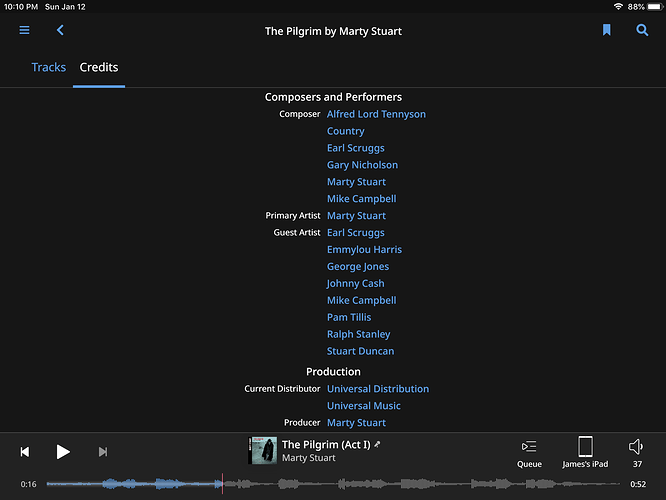 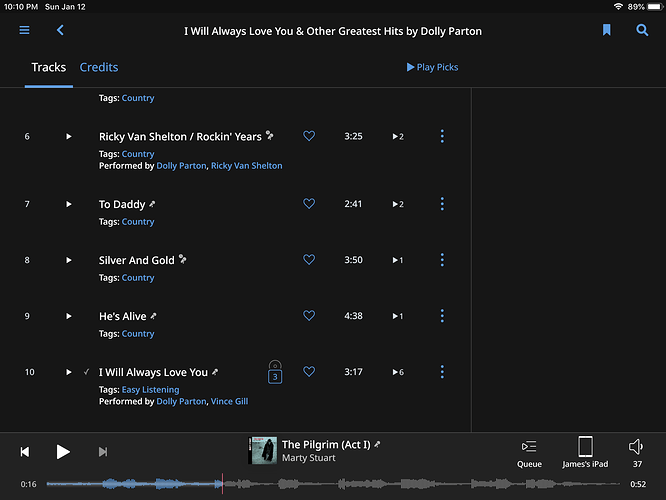 I’ve been unable to find a metadata tag or setting that would prompt Roon to display the artist singing the track. It would be nice to know who is singing.

Am I missing something, or is this something that comes from Roon that the user has no control over?

Certainly someone @support knows the answer?

As a hack I add them to a performer tag in the files then Roon picks them up (you’d have to force a rescan in your situation).

I couldn’t find a “Performer” tag in mp3Tag. Is the tag called something else?

There’s an “Album Artist” tag, and an “Artist” tag. Neither shows up on the tracks as “Performed by” in Roon.

Looking in mp3Tag (and dbpoweramp) at a track that displays someone in “Performed by” in Roon, I don’t see any tag associated with it, hence why I wondered if the information came from Roon and cannot be user edited.

Am I missed something?

Add your own tag called performer. Roon provides its own info but also uses performer if it’s there - I’ve seen this work especially where an album is unidentified.

The following may be useful, esp. Joel’s contribution right at the end:

Decoding Mapping of File Based Tags to Roon Roon Software

Thank you for the link. Unfortunately, I found most it overwhelming, confusing, and not specifically addressing my question.

I’m obviously missing or not understanding something. I really need to know specifically, step by step, how to add the correct tag (what tag???).

It’s odd to me that when I look at the tags on a track that Roon does show “Performed by”, there’s no correlation/indication of a tag that’s providing that information to Roon.

The correct answer lies in the very last post in that thread, ignore everything above it, it’s not relevant to your question.

Thanks. Unfortunately, I don’t understand the response in terms of how exactly to implement it in mp3Tag or dBpoweramp.

It seems to assume one is familiar with the details of tag editing, which I am not. Even Googling the subject I get no hits on exactly how to do this.

Perhaps someday someone will take pity on me and provide some hand holding.

Load the album in mp3tag.

Save tags to file.

Thanks evand. I greatly appreciate you sticking with me to help.

I’ll give it a try tonight.

Btw, will doing that make Roon display the performer under each track, or just under the Credits tab?

Should make it appear under each track it’s written to.

Perhaps where I’m not doing it right is where I’m adding the PERSONNEL tag in mp3Tag?

When I added the ROONTRACKTAG, this is what I put in the Name, Value, and Field fields (it’s the same format in other tags, so I just followed those examples). Set up this way the ROONTRACKTAG works fine. 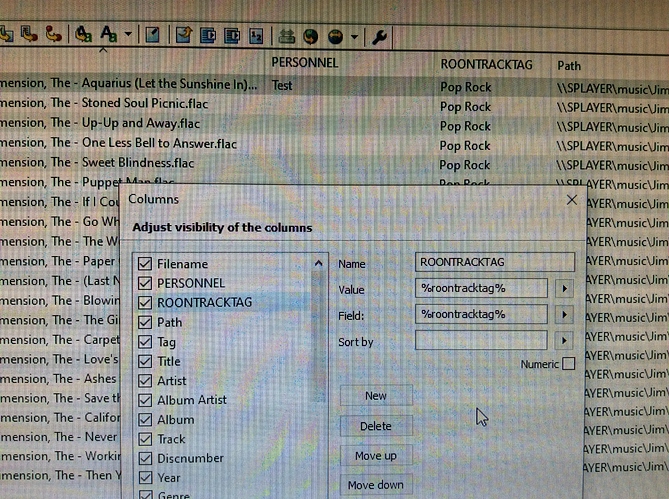 You can see in the above pic a column is created named PERSONNEL, with fillable fields for each track. As you can see I filled in “Test” for the first track. Nothing from this tag appears in Roon. I tried putting in “Test - Featured Artist”, and still nothing appears
in Roon.

When adding a tag in mp3Tag, can anyone tell me what to put in the Name, Value, and Field fields so Roon will put the artist performing the track under the appropriate track?

I enable the tag panel in “View”. It means I can make the Personnel tag multi-line which is useful when you want to add a lot of performers. When I added the Personnel tag there was no “Value” field, just “Default value”. I didn’t change anything and left it at ‘keep’. This works for me and tagging “Artist Name - Featured Artist” at the track level gets me the performer credit under the track title. 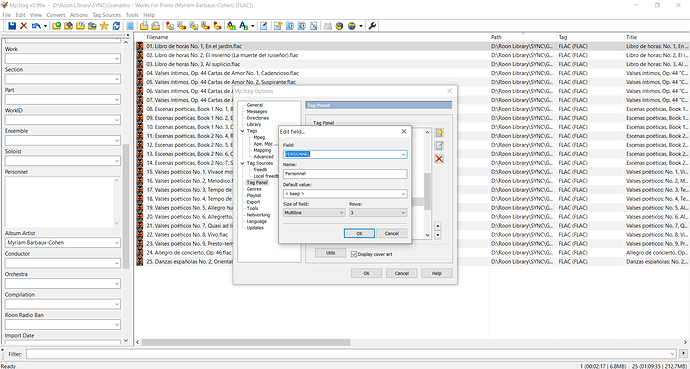 If that doesn’t work I don’t really know. But it may be that you have to change your track settings on import: 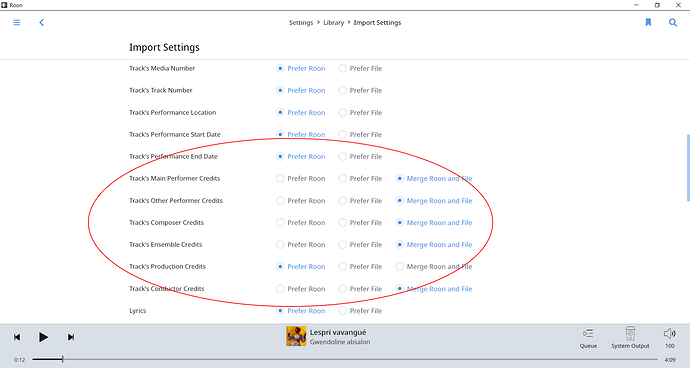 I thought I was making progress when I copied your Import Settings. When I did that, “Performed by” did appear under the track I was testing. But when I tried to remove “Test” by “Performed by”, it would not go away, nor could I edit it in mp3Tag. I still could not figure out what tag in mp3Tag Roon was reading to get the Performed by information.

Out of frustration, in mp3Tag and dbpoweramp I deleted any reference to a Personnel tag. When I did that, the “Performed by Test” info went away in Roon. I tried adding in the Personnel tag again in mp3Tag, but I’m back to square one where Roon will not display Performed by under the track when I enter the data in mp3Tag under Personnel despite my new Library import settings.

I believe the problem is I don’t know the exact steps to properly add the appropriate tag (is the correct tag PERSONNEL?) in mp3Tag. It’s odd that I had no trouble adding the ROONTRACKTAG in mp3Tag, but cannot seem to correctly add the PERSONNEL tag using the same steps.

The screenshot you posted I believe just shows how to make an existing tag field visible in the Tag Panel on the left of the screen. I don’t believe it actually adds the new tag to mp3Tag.

Would you do me a big favor and post the following…

Go to the top and click on View, then Customize Columns. Do you see PERSONNEL in the list? If so, click on it; what does it say beside Name, Value, and Field?

Also, Click on View again, then Extended Tags. Do you see PERSONNEL in the metadata list? If so, what does it say beside it?

The screenshot you posted I believe just shows how to make an existing tag field visible in the Tag Panel on the left of the screen. I don’t believe it actually adds the new tag to mp3Tag.

I didn’t actually notice there was a column/spreadsheet view in mp3tag until you have pointed it out. I never use it and always use the same procedure to create new tags. I go to Tools->Options->Tag Panel->Add Field. I have added many fields this way, not just ‘Personnel’. All visible in roon.

When I go to the column view, there is no Personnel field available from the pick-list, so I have to create a new column: 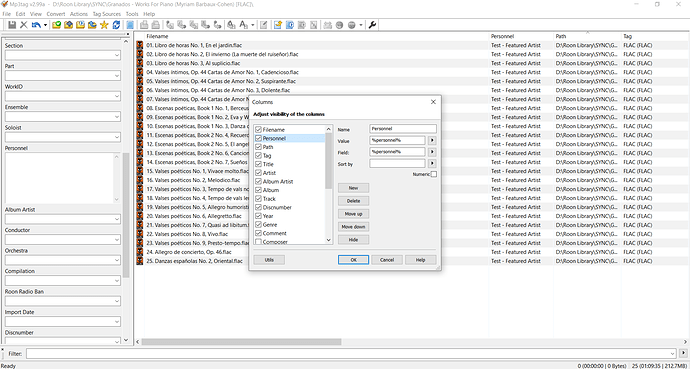 When I do that, this is what I see in mp3tag: 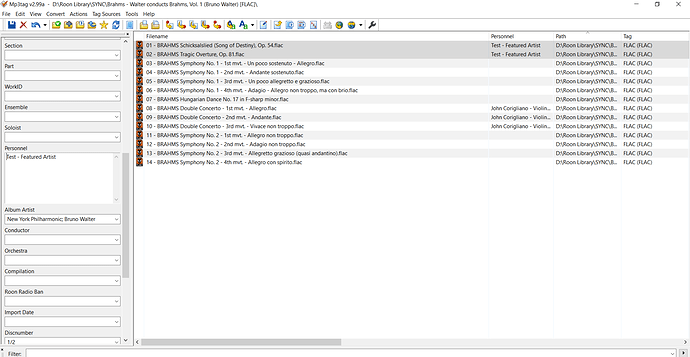 And this is what I see in roon: 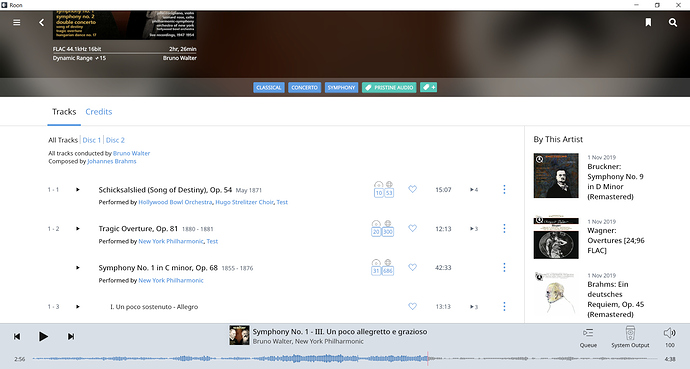 We are obviously using mp3tag/roon in a different way. It works for me but not for you.

But when I tried to remove “Test” by “Performed by”, it would not go away, nor could I edit it in mp3Tag.

I do not experience this. I do not have to rescan in roon, for example, when making edits in mp3tag. Roon realises there has been a change which is automatically propagated. If you have copied what I did and it doesn’t work I am out of ideas I am afraid. I cannot think of any additional steps I have made that may account for it.

Thank you so much for taking the time and trouble to post that.

Seeing how the details are filled out I can see what I was doing differently (and not working). Using your example/procedure I’ll give it a try.

That said, I think I got it figured out without having to add a new tag. OMG, I”m embarrassed to say the answer was simple. The clue to the solution was in your post about Roon’s Tag Import settings.

All that aggravation and the answer was a simple setting change!

I’m a little miffed that someone from Roon didn’t chime in and answer my original question (from what tag does Roon get ‘Performed by’ information).

I GREATLY appreciate you forum members who posted here and stuck with me trying to help me! Thank you!!!

I still want to test your method of adding a new tag in mp3Tag. At least after all of this maybe I can learn something that may come n handy n the future. 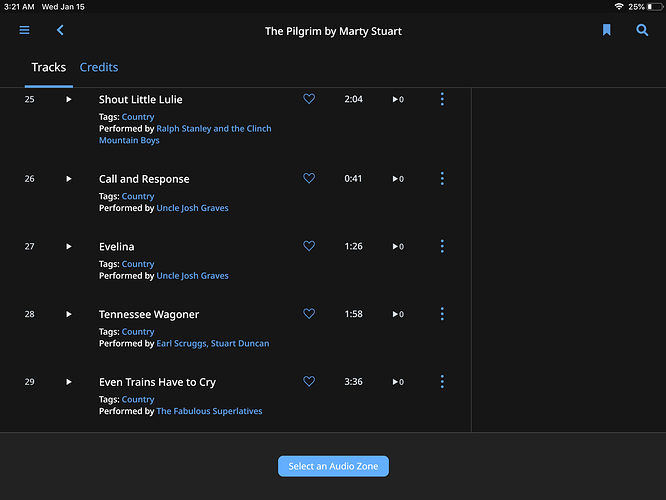 So, with my Tag Import settings changed, I tried again listing the person performing the track under ARTIST, and it worked!!

Good luck. But you will find this does not work consistently. There have been many posts about it. Hence the “Featured Artist” trick. It also seems to work with “Soloist” or other roles like “Piano” or “Violin”. But often I find I have to add an additional “Primary Artist” tag as well. That just has the effect though of getting duplicates into the Credits pane. But I rarely use that view, so I don’t mind. I don’t believe there has been a definitive answer on this from roon, not that I have seen anyway. There seems to be a lot of interaction effects between various import settings and over-lapping and related tags.

In general, unless you’ve told Roon otherwise via settings it’ll use its own metdata and ignore file-based metadata. The exception to this is when an album is Unidentified - Roon will then use the file based metadata. Outside of that you need to tell Roon to prefer one or the other or use both (e.g. genres, composers). Where you use both Roon is generally smart enough to eliminate duplicate metadata.

Ah, so not so simple.

Thank you for letting me know.

Perhaps I should use both the ARTIST tag and PERSONNEL tag (assuming I get it working)? Or would using both complicate things further?