Beyoncé has a new album out ‘Homecoming’. It is available on Qobuz. Yet it is not in my Roon. Not even when I add it as a favorite in Qobuz, it does not appear in Roon under ‘my Qobuz’. Wassup?

It’s on Tidal, is she one of the owners? 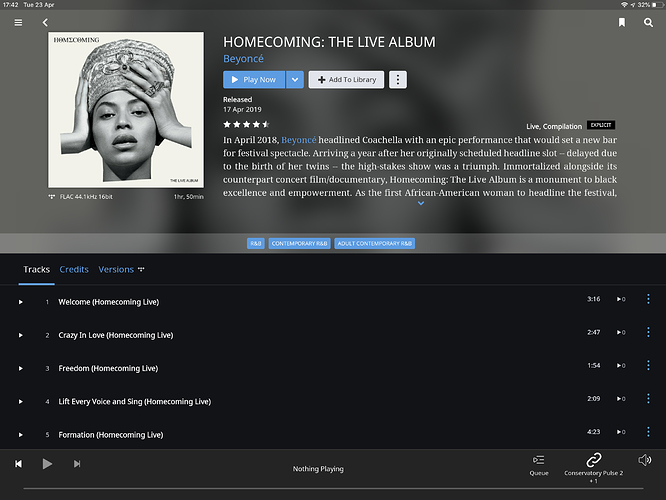 No MQA version either…

The release date for that album was on April 17, 2019. The Roon devs have previously stated that there is a lag between a release becoming available on Tidal/Qobuz and its availability through Roon. I don’t recall the cause identified for the lag, but I think it’s somewhat technical (as opposed to contractual, etc.).

Yes, the Tidal website lists her as an owner, but that probably doesn’t explain the difference in the above-mentioned lags of Roon-Tidal and Roon-Qobuz. The fix is in!!

I agree that Roon is a bit behind Tidal in “showing” new releases each Friday. That said I can usually use the Roon/Tidal search to call up an album that shows in the Tidal App and it Roon will usually find and play it.

I know, but this is different. All 17 april releases have found their way to Roon under the Qobuz tag, except for the Beyoncé album.

It is all there in the U.K. What territory are you guys in with the problem.

It is all there in the U.K. What territory are you guys in with the problem.

In the UK, via Roon? Are you sure?! There was a problem in the delivery of the Qobuz metadata for this album to us which has now been resolved. Homecoming on Qobuz (both explicit and clean versions) should be available in Roon this evening (European time).

Please accept our apologies for the inconvenience. This one was an anomaly which was completely outside of our control.

I did a search on Homecoming and it wasn’t there but on Beyoncé with the accent over the e one version was there. I have both Tidal and Qobuz at the moment.

It must have been a TIDAL version. The Qobuz versions simply aren’t in our metadata (yet).

The Qobuz versions are now available. You may need to refresh the Qobuz “New Releases” page to get the album to appear there, but it will also be available via the Beyoncé artist page and Search.

This topic was automatically closed 12 hours after the last reply. New replies are no longer allowed.