Are there any experiences with Apple Mac Studio M1 48 core CPU and HQPlayer? Or Apple Mac Pro 12 core Xeon?

Which one would be the better choice? How they perform compared to MacMini M1 core?

I was wrong, the Mac Studio M1 Max has 10 CPU cores. 8 performance cores and 2 efficiency cores.

This are double the performance cores of a MacMini M1. I’ll give the Mac Studio a chance, hopefully then ASDM7ECv2 runs gapless with all filters.

The M1 Ultra has 16 performance cores, but is actually not available in store.

Thanks for reply. No I haven’t tried. Mostly rock, sometimes new wave pop and electronic and occasionally classical or jazz

For your genres try short mp. If it is too dry for you then try gauss hi-res mp.
Otherwise, Jussi’s presets are great. Nothing will ever be perfect…

Great!!! I have changed to this settings and it is amazing

No drop-outs anymore. This machine is the -expensive - key. No sound from cooling or fan.

CPU usage on all 8 performance cores round about 40%. Maybe DSD512 is possible, but my DAC doesn’t support.

on a Noctua-cooled i9-11900-based ASUS board, running Ubuntu Server 22.04. All good, excellent sound for normal listening sessions. However, yesterday I left it running overnight (ambient temperature 17C) as part of breaking in some headphones. When I got back to the system this morning, there was faint crackling on some tracks, and when I looked at CPU load, it was pegged at over 80% (unlike the 20% I had seen before) and core temperature was over 80C, which made me think the CPU was hitting thermal throttling. My questions:

For (1) yes. But I would keep eye on the temps under normal playback to check if the temps keep creeping up, indicating inadequate cooling.

What kind of Noctua is it? And what kind of CPU fan profile do you have in BIOS?

It could be related to the fan control, such as BIOS settings. I’m assuming here you are not using any Noctua’s fan speed lowering resistors, which could be limiting maximum possible CPU fan speed.

Last item is to consider thermal paste between CPU and cooler. If there’s not enough, or if there’s too much, or it is not evenly spread thin layer.

Is there a way to tweak core use to reduce peak load?

This is wrong approach… There should be adequate cooling so that even sustained 100% CPU loads don’t cause CPU temps to creep over ~70C.

As an example, in normal gaming use case, you would have both CPU and GPU operating at constant 100% load for several hours. So HQPlayer is still sort of easy use case.

Thanks, @jussi_laako. This is the build, with i9-11900, 32GB of main memory, 500GB of M.2 SSD and a 4TB SATA SSD, Noctua NH-L9x65 Low Profile. It’s currently running Ubuntu Server 22.04, nothing but OS, basic services, hqplayerd, and syncthing. SilentPC have a good reputation around here for the quality of their builds.
Update: Checking the BIOS fan settings, they were in “silent” mode, changed them to “turbo” mode that speeds up CPU fan speed earlier and faster. Long-running core temp now around 70C.

After using the popular poly-sinc-gauss-long/ASDM7ECv2/DSD256 setup, I thought it was time to try something else.
poly-sinc-xtr-short-lp/DSD7 256+fs/DSD512 is working and sounding very good. Rock solid passing the traffic too.

poly-sinc-xtr-short-lp/DSD7 256+fs/DSD512 lasted just a day. I began to feel somthing was missing in the music after a while.

Reverting back to poly-sinc-gauss-long/ASDM7ECv2/DSD256 restored the balance. This combo is hard to beat, well, in my setup anyway.

Reverting back to poly-sinc-gauss-long/ASDM7ECv2/DSD256 restored the balance. This combo is hard to beat, well, in my setup anyway.

at least you can compare thr same filter, but ECv2 modulators are difficult to beat

Can someone offer thoughts/comparisons and the pros and cons of:
IIR v. minphaseFIR v. minringFIR-mp

I thank everyone here for sharing their experiences. It’s been really eye-opening!

Before I was using a Bluesound Node to support MQA on Tidal and it was connected to the DAC-60 coax digital. I updated the old Mac Mini to run Roon to consolidate my digital music and have it as a dedicated player.

Then I found out about HQP and that Roon also supports MQA, so I ended up running HQP direct USB to DAC-60 with DoP and no longer using the Node and I got also a qobuz subscription for more FLAC High Res Audio Choices.

I’m really impressed with the results.

These are my last two settings, the latter one is my current one. I was inspired with @Deano settings, the only issue my old Mac Mini processor goes to 100% using the poly-sinc-gauss-long, so I’m staying with the poly-sinc-xtr-lp/AMSDM7 512+fs setup for now! really enjoying it 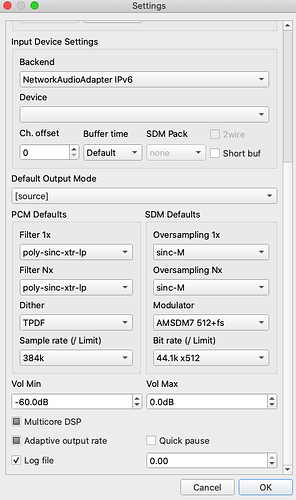 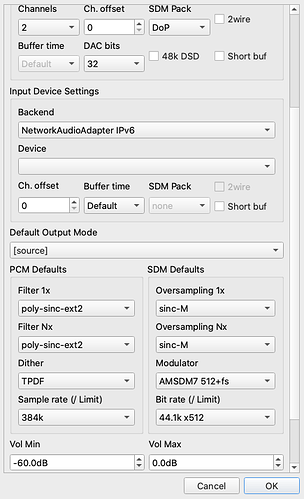 Thanks for sharing, my Mac Mini 2021 2.5Ghz Dual Core i5, runs HQP at 45% with these settings, has more instrument separation, and feels more alive. 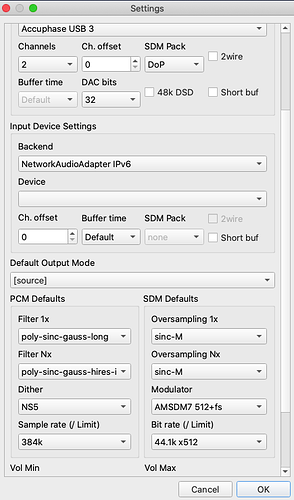