Thanks! Now I figured out what was the problem: the first separator should be colon, not semicolon!

Idea of the syntax is that first part indicates name of the plugin, such as “iir”, “riaa” or “delay”. Then after color there are semicolon separated arguments for that plugin instance. And then multiple plugins can be comma separated. What is left over that has not been recognized as a plugin is then dealt with as a file name pointing either to a convolution filter WAV or parametric eq TXT file(s).

Currently rocking these settings (SDM), at the very edge of what my hardware is willing to compute, while jumping (illusion) / falling (reality) down the next rabbit hole: ‘Matrix Pipeline’ and room correction via DSP.

Thank you all for the suggestions and again kiitos @jussi_laako for replying to silly questions late at night on weekends!

Hi @jussi_laako, for listening on speakers I love gauss filter, but for headphones is much tinkling and treble are more aggressive. Analogue IRR filter sounds relative good, but you don’t too recommend that. Is there any similar filter to IRR from “poly” range? What is the nearest? Genre is from classical/jazz to rock/electro. Thanks

You could try some minimum phase filter, for example poly-sinc-short-mp(-2s).
Or the linear phase version of the same. Then just the poly-sinc(-2s) or poly-sinc-mp(-2s) are intermediate ones.

You could also try poly-sinc-ext2 which should sound a bit tamed compared to gauss-long. And between above and gauss.

IIR has a nice tonal quality, but lacks a bit of resolution and space in the highs. Nice to listen to from time to time. A less steep IIR for high res files would be very nice, but Jussi does not seem te like de IIR route.

I’m an idiot… There was a firmware update for the May with a fixed volume option. Fixed everything… Just FYI if there is another idiot with a May asking the same question haha

image843×234 6.73 KB
I finally got this combo working on the new version of Hqplayer.
The difference between 256 and 512 on a Holo May is much bigger than expected! For me the most noticable effect is an increase in bass definition. It’s making me consider buying a 13th gen intel to see if 1024 is even better

This is great for headphones. Thanks

I could try the 512+fs filter at 256 and see how that sounds different, although that modulator is not designed for that rate. Jussi has stated that it’s better to run an EC modulator at 256 than without one at 512, but i’m not completely sure if there are significant differences between the one bit and pseudo multi bit modulators.

I’m looking for advise on the best HQP filter/dither to upsample 44.1/16 to 96/24 on a Cirrus Logic CS4398 based dac. Only 96/24 is supported so it must convert between rate families (no integer upsampling)

I’ve found this classic filter upgrade quite nice, now that I’ve a computer that can handle it.

I always use one set of filters from my children’s nursery rhymes or symphony orchestra. I never have to change it. 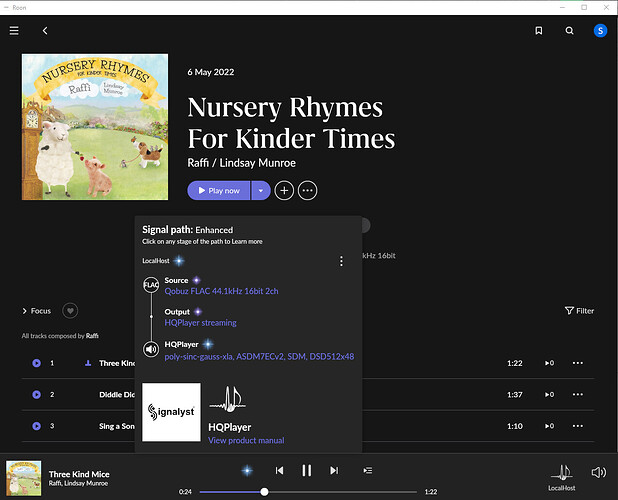 Yes, these are pretty different. The difference between 5th and 7th order modulators is smaller, although that is also pretty notable in some ways. There is no absolute “better one” between these.

I’m looking for advise on the best HQP filter/dither to upsample 44.1/16 to 96/24 on a Cirrus Logic CS4398 based dac. Only 96/24 is supported so it must convert between rate families (no integer upsampling)

I think the default filters are good starting point, but since your maximum rate is limited to 96k and you may need to also down-convert some content, I would set both 1x and Nx to poly-sinc-gauss-long for starters. But please consult the manual table for some guidance about other alternatives. Use TPDF or Gauss1 dither, and remember to set DAC Bits to 24.

Thank you for the help. In the manual, do your terms “rates” or “playback rate” always mean output sample rate when referring to filters and dither?

For dither, it is always about output rate. On filters it is usually stated, or simply talking about conversion ratios. Playback rate refers to the output rate.

Can anybody explain me Noise-sharping / dither / modulator selection? F.e. NS5 is designed for 8x to 16x rates. I am playing file f.e. 96 kHz with upsampling to 384. These recommended rates in manual (see attachment) are for original file or to upsampled files? I am using TPDF, but want to try NS5 or NS9. Thanks

These recommended rates in manual (see attachment) are for original file or to upsampled files?