So I’m fairly new to all this but it seems a simple kitchen endpoint can be either something like a iQuadio Dac/Amp for around £110 with a eg Qacoustics 3030 for £150 which is about the same price as a Bluesound Pulse Flex.

I don’t mind tinkering but for a difference of less than £40…the Bluesound seems like an advantage because of the 5 preset buttons that can be used for internet radio station presets.

So my question is: are those 5 buttons literally push and play or do they need fiddling with to work. In the morning, first thing, the last thing I want to do is get on the network to make something happen that is not happening.

The iQuadio solution would mean keeping the current standalone internet radio that I already have that is just fine and dandy and adding a Q Acoustics 3030 speaker for music playback.

So …can a Pulse Flex replace an internet radio and what sounds better…a 3030 or a Pulse Flex?

I have the pulse flex, it’s a great device, you can’t go wrong with one.

Just press your desired preset and in 3 seconds you’re listening to radio in the morning. No app needed, volume controls available too.

Am I right in thinking the five buttons give me four radio presets as the fifth has to be ‘back to Roon’…?

You don’t need to go back to Roon. Using Roon will just superceed anything else. I set a Bluesound alarm to start the Radio most mornings so I don’t even need to press a button.

I have mine set to 4 radio stations and Roon.

If 5 are radio stations you have to use a phone or tablet etc to change back to Roon. I have a long 20 hour playlist and when I press 2 it starts up where it left off.

Excellent info thanks. Wow that it looks small for £300! I’m sure size isn’t everything but it is small. 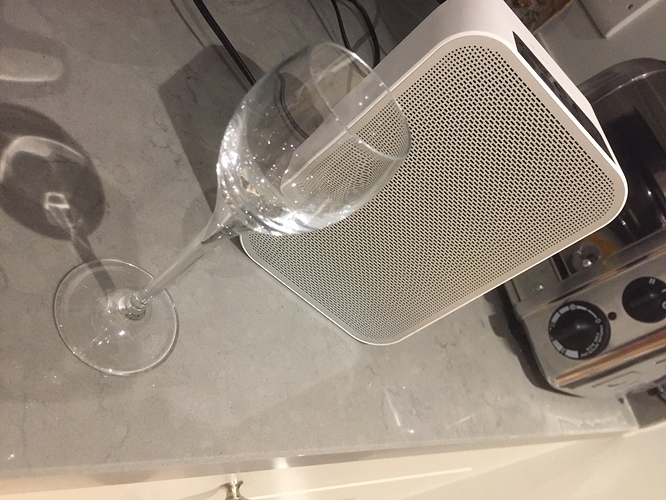 Small is good in a kitchen.

Another Thumbs Up for the Pulse Flex - great unit.

Hi, I use an AudioPro T5 https://www.whathifi.com/audio-pro/addon-t5/review in the kitchen, Bluetooth, Wireless and AirPlay functionality. Core on my MacBook, music on a Synology NAS. 4 buttons on the top for radio presets.

I just ordered the Bluesound Plex Soundbar for use in the kitchen.
It will be installed on a 2 meter high cupboard.