Who will keep making CDs?

Just got this from Mosaic:

We are currently determining whether to a release a new Mosaic set THE COMPLETE WOODY HERMAN DECCA, MARS AND MGM SESSIONS (1943-1954), which will include 131 tracks on 7 CDs

With the slowing of sales of CDs, we need to be assured that there is enough demand for this set before incurring the costs and commitment to issue this body of work. The Mosaic business model is becoming harder and harder to sustain and therefore we’ll need a strong response for preorders before we are able to proceed.

Sad days for the music industry, or just an inevitable result of crowdfunding?

Sad days for the music industry,…

The music industry is not sad at all, they laugh their asses at us (consumers or artists, doesn’t matter). The day when “industry” word will vanish from “music industry” will be the day when it remains the only thing that matters: music (probably will never happen).

Death to physical media! They will not be missed, certainly not by me. Just sell the stuff as a download collection…

So, where to buy CD-quality downloads (or better)? Amazon seems to be selling MP3s. Onkyo has a store, and I’ve heard of HDTracks.

The search results will lead to all kind of shops. Personally I buy a lot of digital music via the Qobuz-app . While i’m not a Qobuz subscriber you can sill use tha app (smartphone!) to listen to your bought albums (as well as download them).

Is there a resale market for downloaded purchased tracks?

Is there a resale market for downloaded purchased tracks?

Probably not. But that is neither here nor there. Buyers are not entitled to a resale market for used media. That really was an unintended consequence of physical media – in that the license was conveyed via ownership and/or transfer of the physical item.

The “first sale” doctrine is well entrenched in law. Hard to see that as unintended. Un-desired, perhaps. But perhaps blockchain will solve the problem of ownership of intangibles.

I am aware of the first sale doctrine. But that was not my point. Being able to sell used media is different from being entitled to a resale market.

I suppose what anyone is “entitled to” is a perpetual matter of argument amongst adherents of various political philosophies. Clearly “first sale” provides for resale, so it’s a “right” under U. S. law, though, as you say, it doesn’t mean anyone is obligated to build a market for me to sell it in. But if resale markets don’t exist, that reduces the value of a purchase, which was the point I was trying to ascertain. I suppose I could always resell it on eBay, unlike a Kindle ebook.

For our foreign colleagues, here’s the Wikipedia summary:

“The first sale doctrine, codified at 17 U.S.C. § 109, provides that an individual who knowingly purchases a copy of a copyrighted work from the copyright holder receives the right to sell, display or otherwise dispose of that particular copy, notwithstanding the interests of the copyright owner.”

Highresaudio.com is pretty good too.
Edit: and Blue Coast Music, who produce and record all of the music they sell, to excellent standards,
as far as these old ears can discern!

One up for Blue Coast Music for audio quality. Unfortunately they are priced chaotically to say at least.

Is the real source even available in this format? Seems much more likely to me that their “source” is simply upsampled from the “real” source (most likely PCM 24/96), and that you are paying for their upsampling vs just having Roon/etc do the upsampling on the fly…

According to their site, they record to DSD 256 and 2" tape. 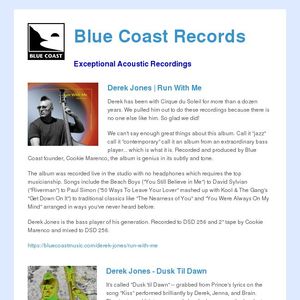 Spotlight on Derek Jones... and Time to Join Blue Coast PRIME for a year round...

Blue Coast Records Exceptional Acoustic Recordings Derek Jones | Run With Me Derek has been with Cirque du Soleil for more than a dozen years. We p...

This album marks Meghan's very first collaborative effort with Cookie Marenco. The two met at The West Coast Songwriters convention in Palo Alto where Meghan and bassist Marco Ferrero were asked to perform after winning the yearly competition. In a...

It's called "Dusk 'til Dawn" -- grabbed from Prince's lyrics on the song "Kiss" performed brilliantly by Derek, Jenna, and Brain. They've turned it into a sensual slow funk groove -- the hardest thing for musicians to learn -- slow, soft, groove! The...

These are the first tracks from some of Jenna's now classic early albums that have been remixed for high resolution audio from the original analog tapes and DSD sessions. Slated to be part of a "Producer's Choice" series on Blue Coast Records, both...

I didn’t go deeper. I bought some cds from them some time ago and I really like how they sound. I’m looking into their Hi Res library now to pick up something for a test listening, but they have a lot of unknown (to me) artists so it will take me some time.

One site that hasn’t been mentioned here is bandcamp. I find a lot of interesting stuff there, both from mostly unknown bands and from well-known ones (Death Cab for Cutie for example has their latest album available there). Downloads are FLAC (and some other formats) and typically $10 or less for an album. And it’s always a surprise whether you’ll get 16/44.1 or something higher-res (some have been 24/96, some 24/48, also the occasional 24/44.1 for some reason).

The only caveat is that things can disappear from there. I have several albums that I bought that aren’t available anymore – so pure streaming from band camp is a bit risky. But I always download my purchases right away, so I’m covered there.