Why are my (classical) composers being credited with production?

When I do a search by composer the albums being returned are being split into main albums, appearances and production. I haven’t tested systematically but it seems to be widespread with my library. I don’t really understand what “appearances” or “production” means in this context. In this context I assumed all albums would be categorised as main albums. This is typical: 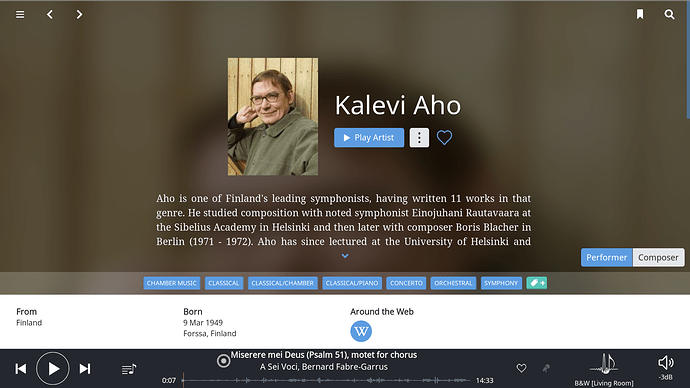 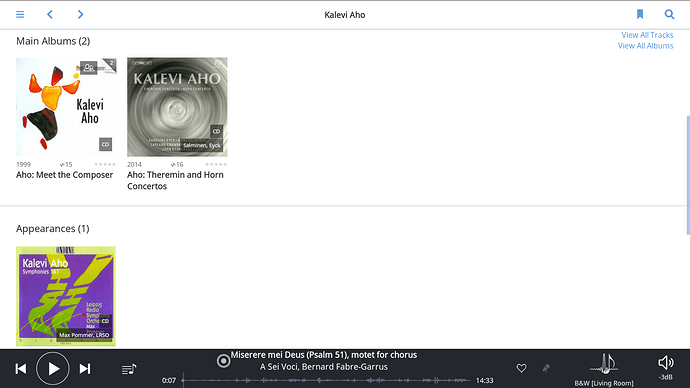 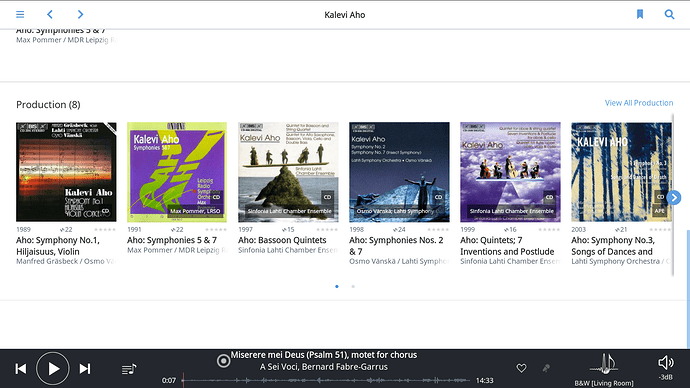 Is this normal roon behavior? The only place I am aware of tagging Kalevi Aho is in the composer field.

This puzzled me too until I worked it out. If you go the album and click “Credits” you might be able to see what the production credit actually is. For example on some of my recordings Beethoven is credited with the Cadenza which makes his name show up under Production.

As it happens with two of them Aho is credited with “liner notes” and/or “cover text”. Aho is a living composer so that’s possible and I checked. And yes he wrote some blurb for these albums. But I just cannot see why “too many notes” like this is of any value. It just seems like confusing “noise” to me. Maybe there is a logic or benefit that escapes me?

For the other 6 there are no credits at all (any other reasons than credit tagging that would cause this?) except one of them has a single credit and that is not Aho. That one, (Symphonies 5 & 7), is also in “appearances”. But again there is no indication from the credits why that would be. On the other hand Aho is listed as a conductor in the body of the text of this album, but in that case I don’t understand what rule roon is using to distinguish between an appearance and a performer (where this album is not listed). For the “Meet the Composer” album, for example, roon has also listed Aho as a conductor but contrarily decides to put the album in the “main albums” section instead

I was going to ask if there was a general rule so I could interpret what roon was trying to tell me on screens like this but there doesn’t appear to be one.

I don’t have very complete liner notes but Aho is not listed as a conductor on the back of the Symphonies 5 & 7 CD. So I checked the Ondine catalogue. These are premiere recordings and it turns out that Aho was an “assistant conductor” on the 5th. On musicbrainz he is listed as an “additional conductor” . On Naxos, Discogs and freedb he does not appear to be listed as any kind of conductor. As it happens on the “Meet the Composer” compilation there is also a version of the premiered 5th where Aho is also listed as an “assistant conductor” in the liner notes but in this case roon has made Aho a primary artist and this is the reason I assume that this album becomes categorised as a “main album” instead.

If it was possible my preference would be that roon listed Aho as an “assistant conductor” in these cases as it is a bit geeky/specialist but at least that gives a clue that he falls under a small category of premiere recordings assisted by living composers. Arvo Part and even Edward Elgar comes to mind. Is that possible? Personally, though, in the absence of consistency I would prefer nothing at all rather than the composer being listed as a conductor when that was not really the case at all.

That leaves just the “Theremin & Horn Concerto” album in “main albums” with no explanation. There are no credits but Aho is listed as a primary artist so I guess that is the reason. Again I have checked the liner notes. Aho wrote extensive liner notes but that does not appear in roon’s credits. I can also see no indication that Aho was ever a conductor, assistant conductor or additional conductor or played any of the instruments. I cannot see him listed as any kind of performer on musicbrainz or the other databases and I have only tagged him as a composer.

I know this is a complicated email but to summarise a picture emerges of a very confused and inconsistent presentation of performances by composers within roon. I am going through my library A->Z and I obviously didn’t get very far before the problems emerged so I think I am pretty safe in assuming that these sorts of effects are all over my library. Is it really feasible for roon to attempt this level of granularity given the current state and inconsistency of public databases?

For me personally I would just like to have the option of switching off this layer of performer “noise” for composers as it really doesn’t add very much unless you are prepared to invest a considerable effort in groomng roon. Maybe, there are a few for which this is important but I can see very little gained to know that Aho was a prolific liner note author and that on a single occasion he was an assistant conductor on one of his recording premiers. It is just layer of cofusing “noise” that ger s in the way of access to Aho’s compositions which is surely the point with a composer?

instead of by default ending up on a confusing messy performer page which doesn’t really work and I am never going to get around to fixing. Has anyone else made a similar feature request?

I just found a performance that lists Johannes Brahms as a performer. It turns out that he is credited as composer and for the cadenza. Though performers sometimes write their own cadenzas, that isn’t the case here, and Roon shouldn’t link cadenza credits with performer credits.