Why are my "Top Tracks" not matching AMG?

Many top artists are not showing popular songs for “Top Tracks”. Queen is an example…clearly not their AMG Song Highlights or hits. Led Zeppelin doesn’t have Stairway to Heaven, Deep Purple not listing Smoke on the Water, etc. Other artists seem ok.

“Son and Daughter” from the first album is not an AMG pick track. “Keep Yourself Alive” would have been the better choice from that album or two others according to AMG.

I am not using Tidal but have all the albums for these artists in my main albums list. Are the albums not titled correctly so that Roon doesn’t know I have these albums and songs? 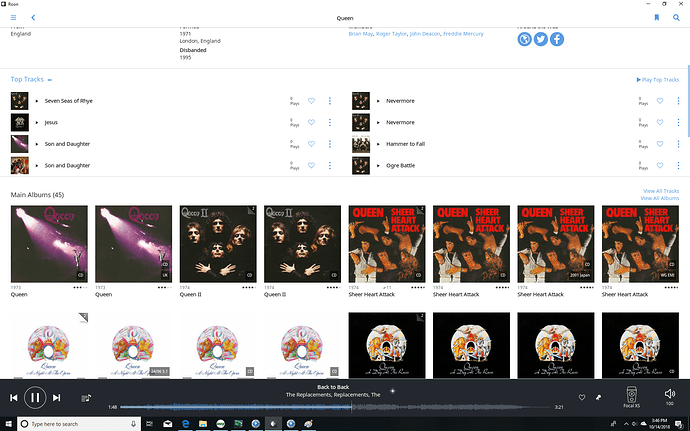 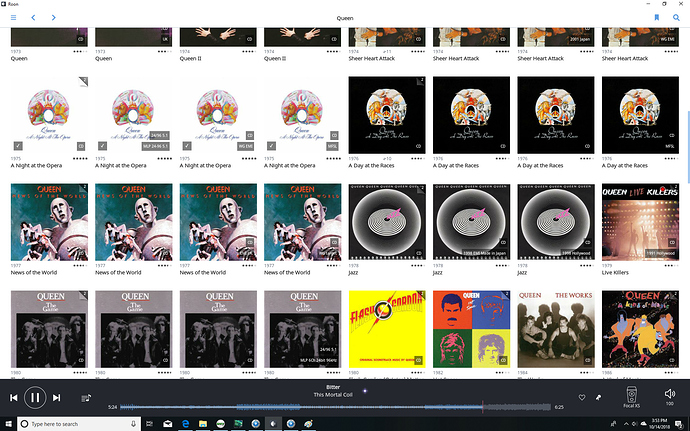 I think that the “Top Tracks” in this screen relates not to some external public ranking, but to the number of times you have played the individual tracks in your collection. From your screenshot, it appears that you’ve played none of the tracks by Queen in your library (they all have “zero” plays). I get a very different list: 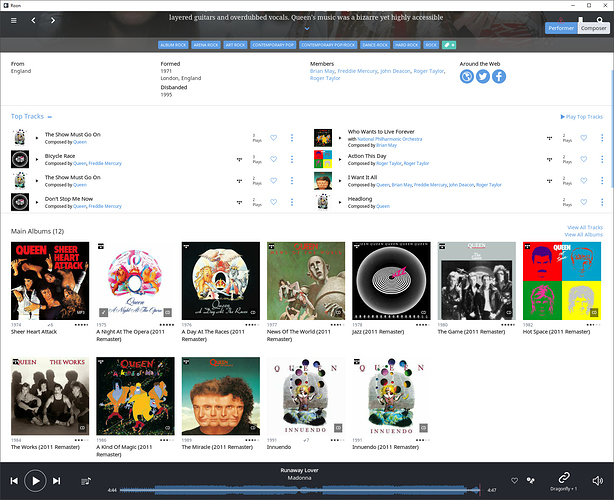 ‘Top tracks’ is misnamed, should be ‘Most Played’ or similar. Clearly the tracks have to be in your collection or there is no point having a ‘Play Top tracks’ button to press.

If ‘Top Tracks’ did refer to an external list, then the arguments would be endless… (and Stairway might not even make my Zeppelin top ten!).

This is very disappointing. I was hoping it would list the AMG Artist Song Highlights (a published list of top songs Roon could reference). I find a similar function useful on music streaming services (maybe they can use top plays across their subscribers and get the most popular songs but using just my own top plays from a library I just loaded seems pretty useless…

I tend to have all the albums by most of the artists I like so I would have enough songs in my library. 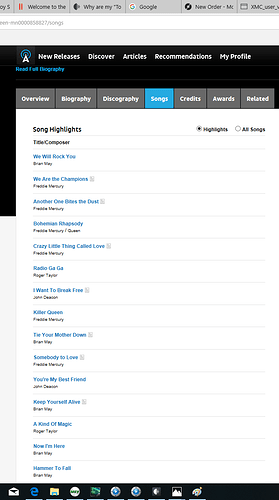 This is very disappointing.

Well, it is what it is. Your feature request has been made before along the lines of similar features in Spotify etc.

It’s more surprising considering all the AMG integration. I just assumed it would use AMG Song Highlights which would make the feature useful. Otherwise it’s an automatic scroll past.

I was a little surprised the COMPILATIONS are an icon vs separate section like Singles & EPs. Keeping with the AMG feature list it would seem appealing to show main albums, Singles/EPS, Compilations (same artist). I like having the singles separate and I like seeing where the artist appears on Various
Artist albums…some of the more useful parts of using AMG.

I use my music library similarly as you, Vectra, and I distinctly remember what you describe as a earlier feature when I tested Roon a couple of years ago.

When I recently opted for the lifetime membership I was also disappointed that this feature was missing.

Are anyone aware of this feature being altered in the past to only view “Most Played” instead of top tracks from allmusic or AMG?

But how could it work if you don’t have the ‘Top Tracks’ in your library? It would just be a disappointment when you clicked on it most of the time.

I would prefer seeing the top song highlights from AMG and greying out the ones I don’t own. that would be informative. I would expect Roon users either have Tidal or a really big library.

Or there are enough AMG tracks picks that top tracks could at least have those form the tracks you have in your library.

I thought Roon used some logic of top play AND AMG track picks. If my plays are all 0 there should be some AMG logic to what is showing up I thought.

Tony,
Plex solves this problem by not showing the “missing” track at all. Works great for discovering new artists in your library. Why something similar like a grayed out or not displayed track has not been done in Roon is beyond me.