Why are track details missing in transfer from Sooloos to Roon?

The detail that concerns me is the listing of the composer in the tracks in an album where multiple composers are involved.

I have spent hundreds of hours tidying up albums in Sooloos for this and other things like different covers. The modified covers come through to Roon but the composer information is not as can be seen from these two screen shots from disc 1 of the 3 CD set "Argerich and Friends, Live from Lugano 2012: 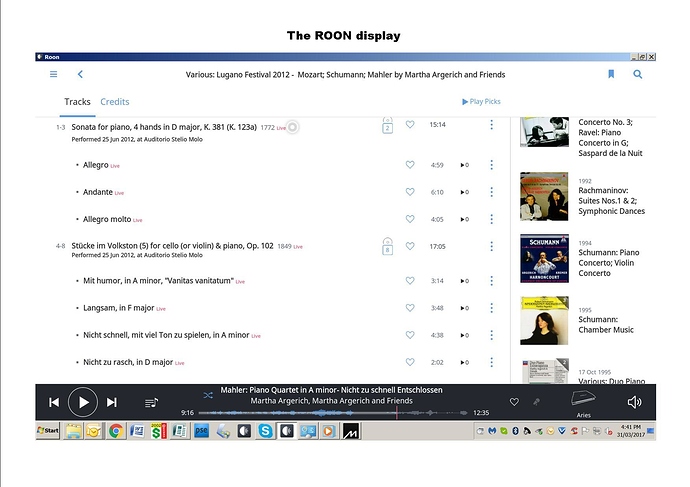 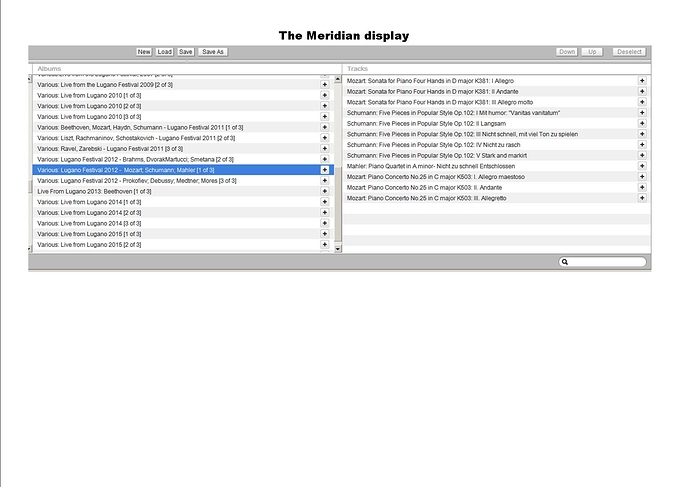 PS: And the Roon labelling as "Mahler: Piano Quartet in A minor is completely wrong.

How is Roon seeing your Sooloos managed music ?

Did you do an export ? Or did you point roon at your sooloos store ?

How did you import your music into Sooloos originally ? Via Control PC or using dbpa? Control PC doesn’t store any meta tags on the track files.

In the particular case above, I suggest you do a manual reidentification.

I just added it from Tidal, and identified, and I got the (correct) composer credits.

Moreover, I couldn’t get them to disappear. I tried removing the Genres for example, but that didn’t get the screen to look like yours. 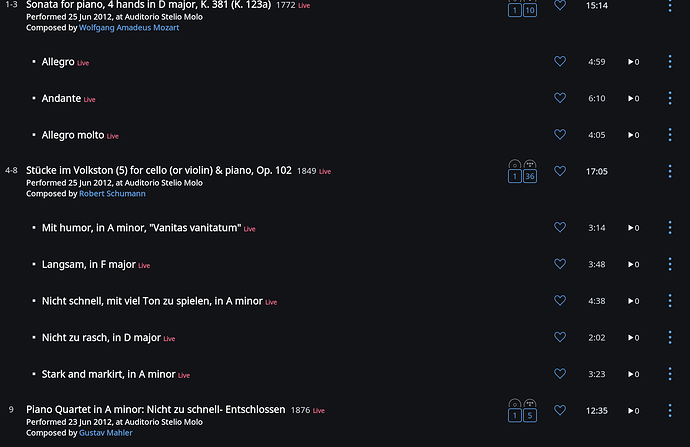 Sooloos doesn’t see multi CD sets in the same way as Roon. In Sooloos they are all just independent discs that may or may not share similar album titles etc. So, you may have CD1, 2 and 3 not quite looking like the same set.

Whether or not you exported is quite key here.

Good point. That could explain why the identification looks weird.

Mmmmm. Looks like I have an insoluble problem which is bad news for my use of ROON. Those 3 CDs were ripped into Sooloos 6 years ago and I have since sold all my CDs.

I went into edit disc 1, tried identify, resan etc but to no affect. The display remains stubbornly as before with no composer listing by Roon except correctly in track 9 as as by Mahler and that has been latched on as the header for the album. The other composer listings in other tracks that were in Sooloos have been removed.

But I’m perplexed as some of that track editing with the composer listed in the track (done on Sooloos) has ported through. In disc2 all composers are there except for tracks 2 to 5. Weird!!! 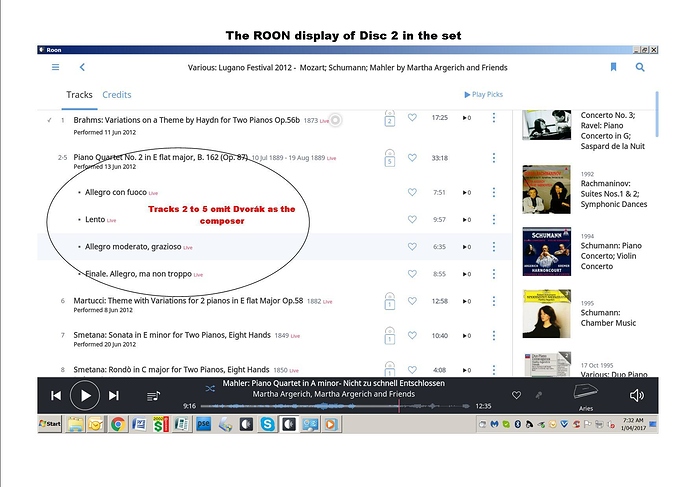 John, you haven’t answered the questions above. That makes it hard to help you here.

What I did originally was to export all albums from Sooloos onto the 6TB HDD used to store files for Roon.

However, I just did a direct export to the Roon HDD from Sooloos and, to my delight, all composers now show up in the tracks as listed in the Sooloos display. And the album is no longer identified as one being a Mahler Quartet.

So I repeated this exercise for the other two CDs in the set but no similar joy with them. CD2 came out the same as displayed above - Dvorak not recognised as the composer of tracks 2 to 5. But then in edit on using EDIT -> IDENTIFY on scrolling down I see the tracks there with the composer listed. So by using the up arrow on each track I now have it displaying the same as sooloos.

However, editing exactly this way for disc 2 in the set will not fix tracks 3 to 6 to display Dvorak as the composer, maybe because it is already listed in track 1? But that makes no sense as Smetana is correctly listed in both the last 2 tracks.

Bottom line I’m very perplexed about what is going on and cannot see how to rectify/edit tracks when this happens.

Apologies, I see contradictions in this post. Disc 2 is not displaying correctly so ignore the statement it came down OK.

OK, I’m well and truly muddled about what is going on. Obviously my “editing” is not correct and not achieving what I want. Using those up arrows was the wrong move and gave incorrect track timings. Disc 1 is now correct but none of the other two are. I’ll delete discs 2 & 3 and download from Sopoloos direct into the ROON drive and see what happens.

Apologies if this is all confused. Reason: I’m currently very confused. 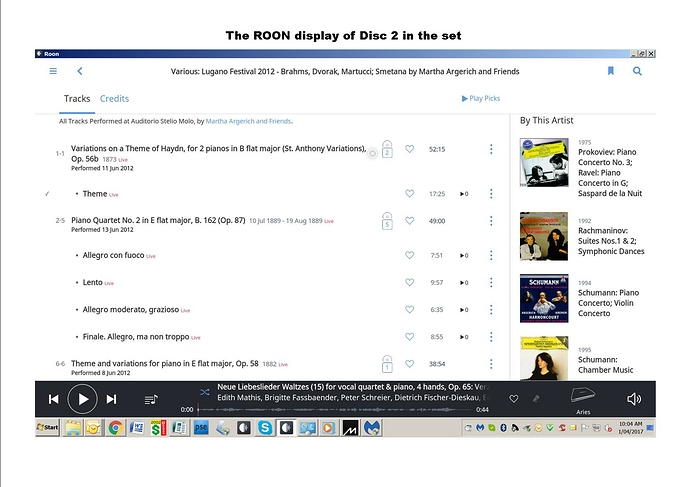 And in edit, I can see the track listing as in Sooloos but cannot see how to get it accepted by ROON. 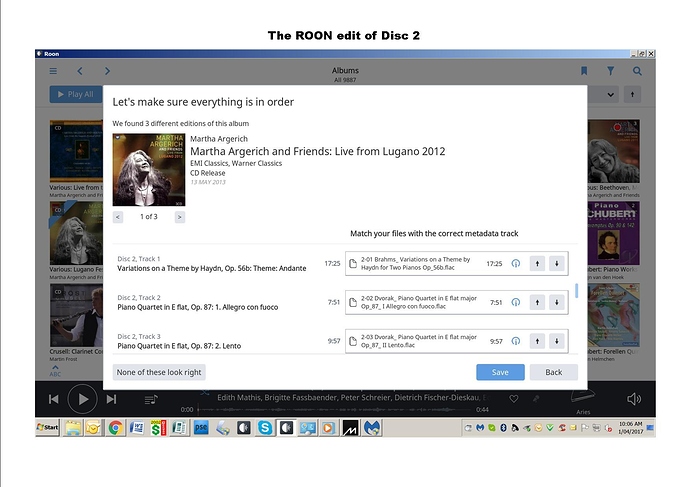 So, can you please tell me what to do.

Using the UP arrow shown in the second screen shot above and then saving did get me back to where I was originally with this:

In other words Dvorak stubbornly refuses to show up in the ROON display for tracks 2 to 5.

Much the same is happening with the other “Live From Lugano” CD sets although one of them does display composers in the tracks, but this is an exception.

I do have the CDs for the 2015 set so just ripped CD1 using dbPoweramp and copied the files into Roon. That CD displays exactly the same as the one copied across from Sooloos. No listing of composers for the works although obviously ROON has recognised what the disc was as it correctly lists the performers for each track.

So why is ROON omitting to list the important composer information for each work?

Here are the ROON settingswhich should give preference to the imported track data … or am I missing something? 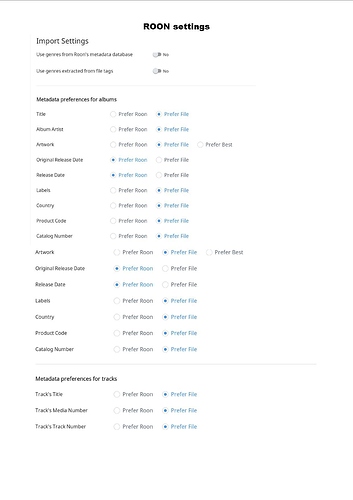 The mystery of how Roon handles files, and track data in particular, continue to baffle me.

I discovered another album where I had previously concocted a new album cover. It contains Beethoven’s 4th Symphony & 2 violin romances. In Roon, the tracks for the symphony just listed the movements so I experimented to see if that could be altered.

I exported the album from Roon and then imported it into Sooloos, editing the 4 symphony tracks with the header “Symphony No 4”.
This edited version was then exported back to Roon (with a completely different artist name).
The track editing was there in Roon, and even more surprising was that Roon picked up the cover previously concocted for the album.

So that was a good event. But why is Roon inconsistent about which tracks it will copy the data of and which it “edits” out data?

That did improve the display for many albums and overcame some of my concerns.

However Roon still incorrectly displays disc 2 in the worrisome set as the screen shots of Roon & Sooloos (verified as correct) below shows. I just tried to download the album to Roon again from Sooloos but there was no improvement. Roon stubbornly insists on the wrong track identification. 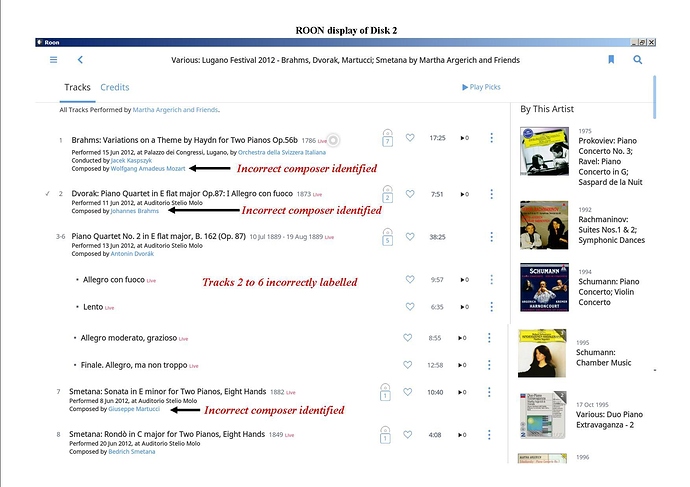 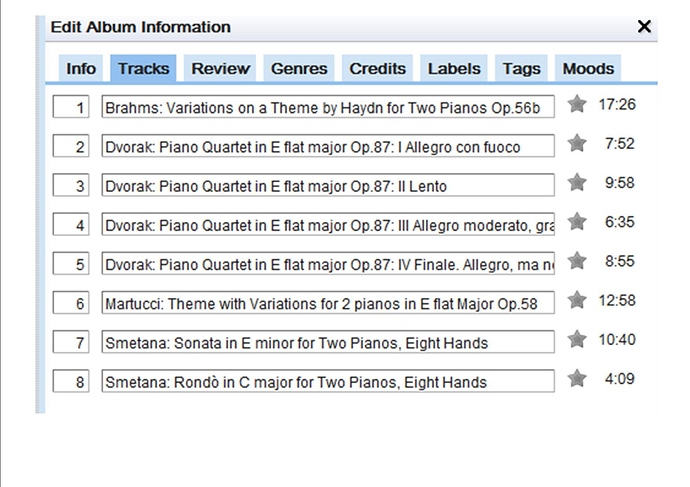 Sigh, FINALLY got it right and can see what to do:

The result is tracks are displayed as they appear in Sooloos.