Why are Translators considered Composers?

@support, this is an English translation of the famous German Schubert song cycle Winterreise.

Jeremy Sams is the translator. There are a large number of translator roles but none of them will drop Jeremy Sams from the Composer line to the Lyricist line. Is there a way round this? 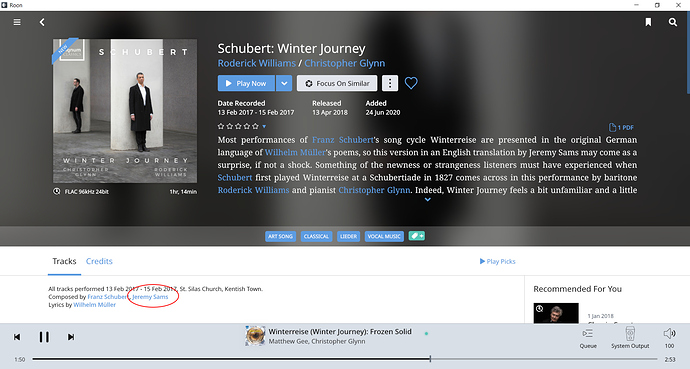 Allmusic lists Sams as a composer so my guess is that’s what Roon takes over into its metadata set. Have you tried to remove the composer credit?

According to the kb page, translator roles are production credits - which - or so I thought - are not supposed to show this prominently. But then the kb page may no longer be accurate.

Have you tried to remove the composer credit?

I am posting so I and others don’t have to keep doing this repeatedly. Of course it is obviously the case that the reason why translators, lyricists and composers are mixed up is because they are mixed up in the data model. That doesn’t really help very much though, does it?

It is not a composer credit. It is a translator credit.

Sams also gets a composer credit. That’s why I was asking.

Settings used for this - as you now stated as well 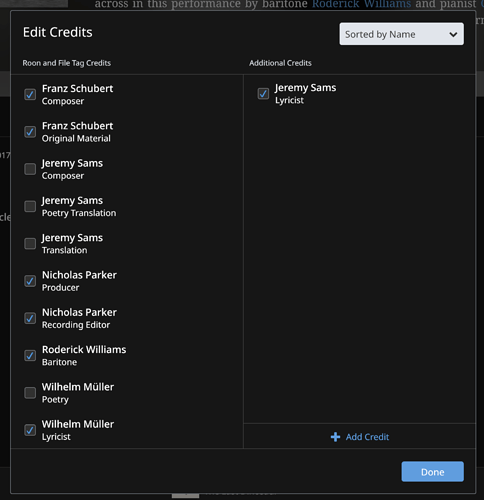 But I’m also wondering why Translator credits - being production roles - are considered to be composer credits (when the knowledge base says something different).

This is a messy compromise.

Of course it is obviously the case that the reason why translators, lyricists and composers are mixed up is because they are mixed up in the data model.

Let’s hope this will get tackled again. Even so I’m not sure if in a case where a metadata source assigns a composer role to person Roon would be able to safely remove this assignment automatically.

„Poetry“, „Text“, „Translator“ — all of it gets dumped into the Composer field,…

Roon knows about it since a long time. Nothing is happening - as usual.

Even so I’m not sure if in a case where a metadata source assigns a composer role to person Roon would be able to safely remove this assignment automatically.

Roon appears to maintain this data. That is, whether it considers an artist a classical composer or not: 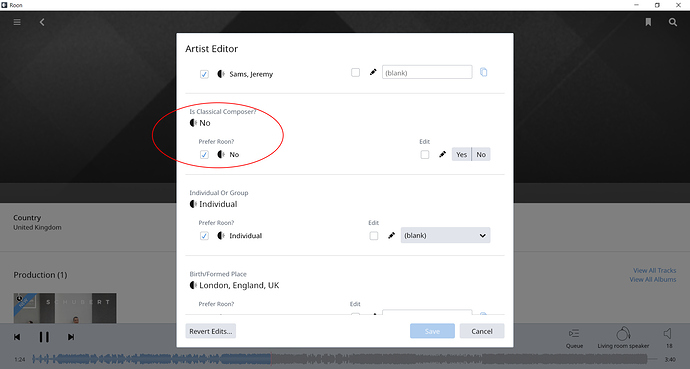 I would have thought with core repertoire like Schubert’s Winterreise this should be very straightforward.

Roon appears to maintain this data.

… in an automated way, not manually curating it.

The metadata import and processing is as far as I know an automated process. So don’t expect the machine to see what you see. Things may improve over time, I don’t know.

Like in the example: when rovi/Tivo says someone’s a composer (classical or not), Roon will most likely take it for the truth and incorporate it in its data set. Not sure if Roon’s actually interested to validate data it pays for.

I still don’t get your point. It’s speculation right?

Sorry. What I wanted to point out is that in this particular example it’s not just that “text related” credit role handling by Roon itself is a problem but also the metadata at the source. As you can see in the Edit Credits screenshot, Roon has Jeremy Sams as a Composer, too - not just two translation related roles; this comes from rovi/TiVo, as the allmusic page shows. Also, I might have misunderstood some of your statements - so, again: sorry if my comments didn’t make sense. The original issue is something Roonlabs sure could do something about with improved logic (but the wrong metadata: maybe not).

but also the metadata at the source

We really are going to have to agree to disagree because I have a fundamental difficulty with this blanket assertion that the problem is poor source metadata. The aggregator has a responsibility as well. That is their value add, especially where data sources contradict each other. This will be extremely common where there no standards it seems to me.

Surely, it is just stating the obvious that roon maintains the classical composer status of Jeremy Sams as “no”. Surely, it is also stating the obvious that roon also knows that Jeremy Sams was born in 1957 and that Schubert’s Winterseise was written 130 years earlier in 1827. On what basis is there any iota of doubt that Jeremy Sams or anyone else for that matter has a joint composer credit for Schubert’s Winterreise? Blindly accepting a composer credit coming through from one supplier that is directly contradicted by one’s own data is incomprehensible to me.

The aggregator has a responsibility as well.