Why can't Roon both decode and render MQA?

Seems like that would sell a lot of Roon if it could.

MQA does not allow this legally. It is already an exception for Roon to be allowed to do the first unfold (core decoder).

The other point which makes it difficult: MQA states to apply specific filters per DAC. Rendering in Roon would obsolete this statement be it true or not.

MQA rendering is a highly hardware dependent process (DAC) and is parameterized according to its characteristics. It can be done only in DAC.

I’m wondering. I have a DirectStream DAC with the Bridge2 card, have I have it set to do both the decoding and rendering or just the rendering? Thanks.

You need the hardware key ( includes a DAC but irrelevant, the point is the hardware key) in order to determine what rights you are allowed for the digital item. Guess the man considers it hackable. But might be wrong - we already have FLAC which is MQFRNLLM ( Master Quality For Reals Not Lossy Like MQA) so it would be silly to worry about that.

Will it ever be possible for Roon to do the total MQA unfold and rendering software in software? MQA

Different MQA DAC applies different parameters of correction during MQA rendering of the same MQA music. This is why it is tied to DAC hardware. This is why it is hard, if not impossible, for a computer software to do full decoding, because you need the profiles for different DAC. The profiles are only obtained by sending a DAC hardware to MQA Ltd. as part of the MQA certification process, resulting in a MQA DAC for which a profile is created - so you don’t need the computer software to do the …

Why can’t I drive my car without wheels? Would be a good analogy. Joking apart, because that’s how it works, the DAC being MQA aware is a critical part of an End to End system. You cannot achieve the end result any other way. Roon could make an MQA Rendering DAC available and that would give the result you suggest. I doubt they would do this as there are so many great MQA DACs on the market at all price levels already, and only one Roon…

evand March 1, 2021, 7:54am #9
Will it ever be possible for Roon to do the total MQA unfold and rendering software in software?

The profiles are only obtained by sending a DAC hardware to MQA Ltd. as part of the MQA certification process

Hilarious given the encoding process is ostensibly everything to do with compensating for the faults and idiosyncrasies of the specific audio chain used to make the recording and nothing to do with the DAC. What a farce the entire thing is.

The DAC has to know and compensate for actions at the encoding ADC stage to accurately compensate. MQA is not just upsampling. It will however sound fine on a generic DAC

Bit Depth of MQA Some misunderstanding has come from over-literal interpretation of our origami diagrams (which are intended to inform concepts for a general audience), misunderstandings of information theory and general lack of appreciation of the...

I can’t really find any meaningful difference between FLAC at 24/192 and MQA.

The quality of the recording and the mixing have more influence on the sound than the file type once the file is in some form of HiRes format I think, personally.

No, both isn’t needed/ recommended.
I have Bridge2 doing both decoding and rendering and Roon just as a ‘normal’ transit without any Roon additions.

To maximize control and monetary return, licensing at the beginning, middle and end is the best solution.

I have the same situation, several DACs that I have chosen with care, for their characteristics, some do MQA and some do not.
Because of this, I don’t use MQA.
Either the final rendering stage is important, and then some of my rooms or headphones would miss out on top sound quality.
Or it is not important, and in that case MQA is only a compression technique and I don’t need that.

It also incentivizes manufacturers with the ability to sell more gear by supporting an encoding scheme that requires two separate stages to decode. I don’t believe MQA would have ever made the inroads it has without the support of hardware/DAC industry. Brilliant marketing Mr. Stuart.

It is also just how it works. I needs an MQA DAC in the same way a car needs wheels…
Not the perfect analogy as MQA plays fine on any DAC… just not optimal…

I’m thinking Roon could maybe develop something called RoonMQA or whatever and build it in to the app which would then output the full MQA result via normal PCM to any DAC.

So please tell me what I’m not understanding about this world MQA thing. The screenshot below is from Roon while playing a MQA encoded download. As you can see the file is being decoded to the full 96kHz sample rate (and this is confirmed by the display on my non-MQA DAC). So what’s missing? 48kHz file is playing at 96kHz - isn’t that the big trick of the one trick pony known as MQA? What does rendering do? Color me very confused. 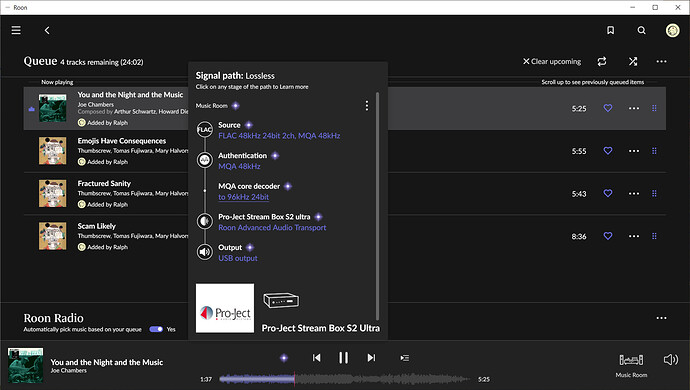 The DAC has to to the final unfold, and unless Roon makes the DAC it can’t be done. It needs an MQA aware DAC.

This step in the decode process will be different for every product, in order to make the resulting analogue conform closely to the hierarchical target and to most accurately replicate what was approved in the studio.

This step in the decode process will be different for every product, in order to make the resulting analogue conform closely to the hierarchical target and to most accurately replicate what was approved in the studio.

That’s why it’s such a farce. Studios are not recording or mastering for MQA.