Why do I have classical composers also as performers?

I am slowly approaching Roon again after the 1.3 update with my classical music collection (180K tracks) by importing CD by CD in order to understand the new logic better.

Now I have imported CD’s by Bach, Brahms, Chopin and Liszt, but Brahms is the only composer I also get shown as Performer? Why that? I do not want to have Brahms as Performer, since I’m pretty sure I will never buy a CD that has him as a performer on it…

What didi I do to provoke that? My Brahms-Album (Mutter, Weissenberg Violin Sonatas) has only the composer tag filled with Brahms. How do I get rid of him as performer?

Thanks for any help!
Klaus

If you click on the Performer button it will show you which album has the bad file metadata.

Usually it’s track artist which stupidly has composer in it. This comes “for free” when you rip.

I do not want to have Brahms as Performer, since I’m pretty sure I will never buy a CD that has him as a performer on it…

What’s wrong about this CD:
http://arbiterrecords.org/catalog/brahms-recaptured-by-pupils-and-colleagues/
with a 1889 recording of Brahms playing piano (supposedly – you can’t discern anything)?

Yes, it’s the file tags. They can be edited within Roon as described here:

I have a lot of old ripped classical CDs with garbage in the TRACKARTIST field. Roon has correctly identified the CDs, but in all cases it adds the Track Artist tag data into the “performed by” info. As a result, I have performers in my library like “Uchida/Tate/English Chamber Orchestra” and “Kleiber (1955)” Is there any way to override this in Roon and tell it to ignore the track artist tags? Thanks

I found it. Obviously I didn’t see the woods for the trees… No problems with my tags, but Roon had added Johannes Brahms as Primary Artist upon album identification. Had to remove it from there and now it’s OK.

However, that concerns me still. During my last major try with Roon (although I’m a subscriber from almost the beginning) I found that more than 30% of my albums are not identified by Roon. So I could either approach this by adressing the unidentified albums piece by piece or by keeping my albums unidentified (can you set this globally to happen? I do not think so)

I thought that the approach of “not letting Roon identify” my albums could work based on what I read in the KB article on File Tag Best Practice, but I’m experiencing some inconsistencies with what’s described there. The article describes the use of tags to display data in Roon. However I do not manage to have the VERSION tag displayed like it is shown here: 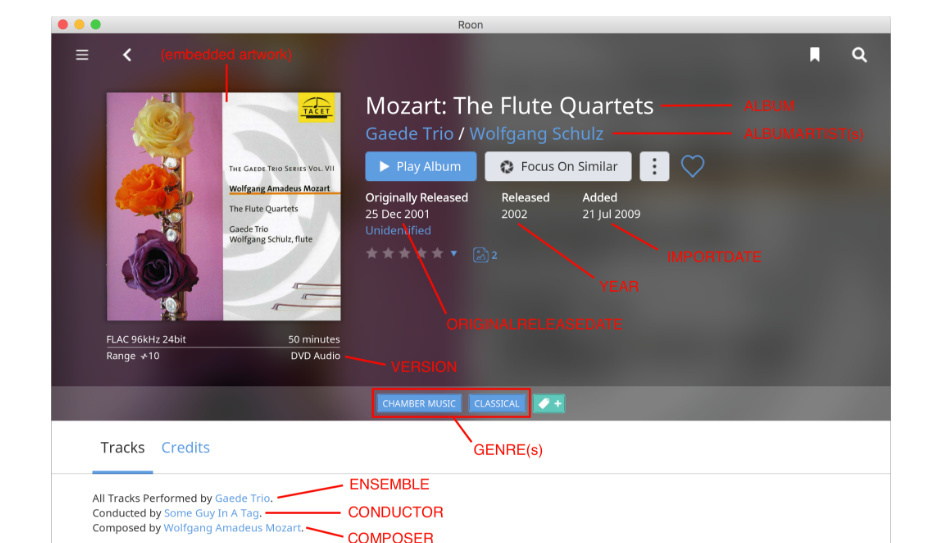 and yes, I have set Roon to read the VERSION tag.

Next issue is the WORK/PART tag. It seems to work fine, but the works are not being displayed as real works, i.e. I do not get the CD and # of performances icon and can’t jump to the composition page. Ist that intended behaviour?

@Klaus_Kammerer1 What album are we talking about here (exactly)? Roon should not be adding Brahms as a performer – I’d like to check the source metadata. Thanks.

It’s an EMI Recording of Mutter and Weissenberg performing the Brahms Violin Sonatas. You already see Johannes on the screen :):

Thanks. I thought it was that one. Raw meta is from MusicBrainz and the album artist string does indeed contain Brahms.

That’s not a problem per se, but I’m curious to know exactly where in the user interface Brahms appears as a performer.

I’m curious to know exactly where in the user interface Brahms appears as a performer.

You can see the Performer button on the artist page in the first posting. Or do you mean something else?

Ah, I’m with you. What I want to know is which specific credit is turning Brahms into a “Performer”.

Oh wait, is it “just” the album artist?

Okay, I’ve answered my own question here. The problem is the MusicBrainz recommended album artist string. I already have a ticket to cover this.

it seems to be the album artist. I have manually removed it here:

this did the trick.

Yup, got it, thanks!

Please note, Brahms can genuinely be a performer. There is at least one recording of his playing. Same goes for Debussy, Ravel. But of people so firmly rooted in the 19th C Brahms is rather exceptional in this regard.

Dear Gustav shows up as a performer on Neumanns Mahler set as “Production”. Again Mahler could be a performer, but not on this album.

That’s designed behaviour. It’s a compromise which I hope can be revised.

Any sweeping change to “ban” composers from being album artists would take the date of the first recording technology into account (so Brahms and Mahler would not fall into any automated ban). Handling this kind of thing automatically when we only have the MusicBrainz metadata to go off is extremely tricky. Which is why being able to edit the album artist(s) is so important.

I do understand that it may be tricky to prevent hese things from happening, but I’d like to have the freedom to remove the production credit. How can I manually remove this?

I think you just need to edit the album credits, and remove Gustav from the credits?

Edit: ah, scratch this - I tried removing a production credit - and it doesn’t seem to work. Whether this is a bug, or by design, I can’t say…

yeah - I found it in the meantime. But it’s tricky to understand that you need to go to the track browser first. I thought this was possible from the album page.