For this album by The Blue Aeroplanes Roon doesnt show a performed by credit for each track. The album can be found on MusicBrainz here

I note that MusicBrainz says track 3 is incorrect named Rare Flower instead of Rare Flowers on this release maybe that is part of the issue, but there is no such warning about disc 2, track 4 Owls this also has no performed by shown. Both Roon and the File metadata have the same value of Rare Flowers and the track also has Primary Artist and Ensemble track artist credit for these tracks 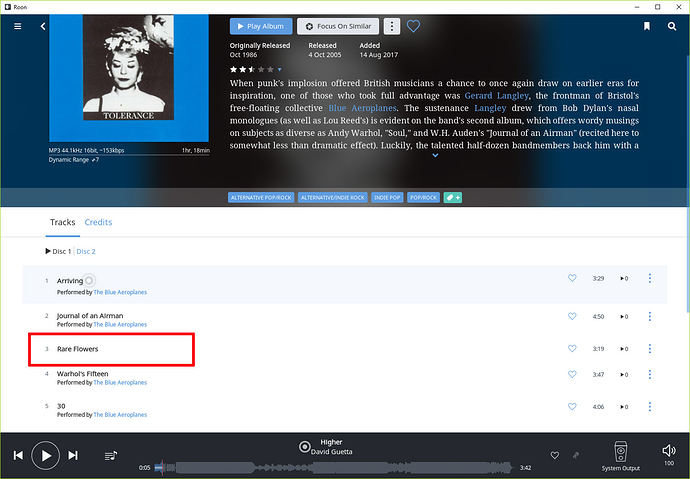 Hi Paul. No, it’s simply that, in this case, the metadata come from Rovi/Tivo, because the metadata are much richer than MusicBrainz’s provision.

@joel but the question is why is the Performed by credit blank for a couple of tracks (see the red box on the screenshot) ?

I don’t know actually, though I would actually asked the opposite question: why is the Performed by credit appearing on any tracks at all when The Blue Aeroplanes is the album artist.

What are your import settings? Are you preferring Roon or File metadata, or merging? Do your file tag artist credits have trailing spaces?

Right I see, it should only show performed by if Track Artist is different to AlbumArtist. Okay but I have changed no preferences everything is set to Preferred Roon, and in my file metadata Track Artist does not have a trailing space.

I tried to change track artist to Prefer File but that does not seem to be an option, it does not seem possible to check within Roon itself if a value has a trailing space ?

Could Rovi data have trailing spaces ?

Could Rovi data have trailing spaces ?

If it does, we’ll almost certainly strip such spaces. Please can you show me your file tags for track 2 and track 3?

I mean Ive messaged you a link where you can download the files.

I see no message!

Right Ive tried again, do you have now ?

@paultaylor It’s the ENSEMBLE tag (with the same name as the ALBUMARTIST and ARTIST tags) which is triggering the display of “Performed By”. In addition, it seems that we don’t display the “Performed by” unless we have a composer in our Cloud metadata.

In addition, it seems that we don’t display the “Performed by” unless we have a composer in our Cloud metadata.

I don’t think this is actually the case. Would have to look at the tracks myself to have more insight as to what’s going on.