Why does Roon's manual album identification list albums even if it doesn't find a match?

I have noticed on very many occasions, that searching for albums in the Roon album match search function returns pretty meaningless results. Attached an example. When I look for Mahler Symphony No. 2 with Stokowski, why does Roon return page after page of Mahler Symphonies by artists, whose name not even closely resemble “Stokowski”.

If it doesnt find anything it should just say so. If it finds just one, list that one and not all sorts albums just to show (off) it has more than one record in its database… Its very time comsung to scroll thru pages of “non-matches” again and again. 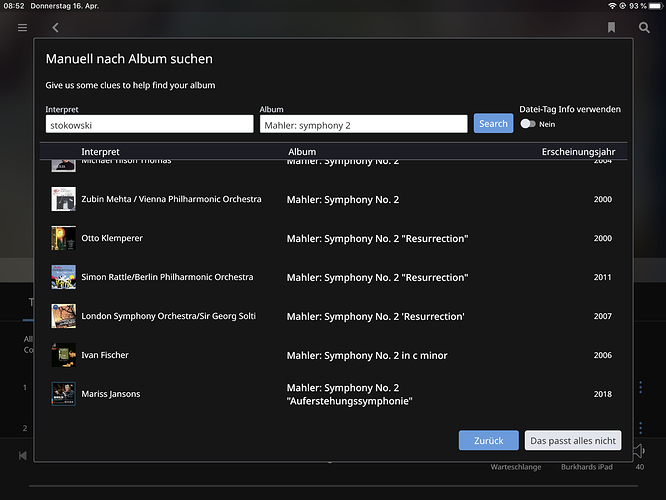 Your screenshot doesn’t show Roon’s search function. What you see is manual album identification. Nothing needs to be “fixed” there, because Stokowski’s Mahler No. 2 shows up correctly. 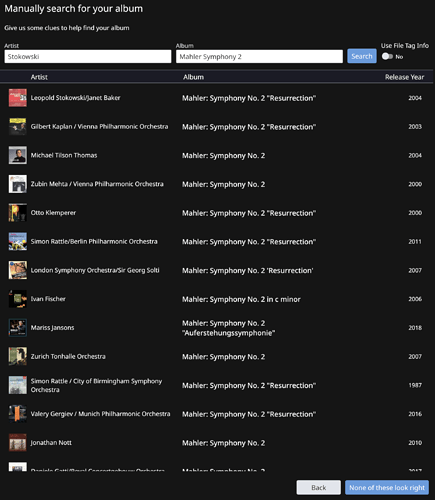 Its very time comsung to scroll thru pages of “non-matches” again and again.

No scrolling necessary here. Stokowski’s Mahler No. 2 is the first album listed. The results are sorted by relevance.

If you don’t want other results to show up (e.g. other Mahler symphonies under other conductors), then you should post a feature request.

Yep, I was waiting for that comment. Its not the recording I’m looking for

And then again: If it finds one matching, why list 25 opther non-matching items? Totally without any sense.

A “Feature request” NOT to show non-matching items in the search function? It gets better every day…

Its not the recording I’m looking for

I never said it was.

But nevertheless it’s undoubtedly a correct result! So nothing needs to (or can be) “fixed”… Databases or search engines can’t know what people are looking for. They either find matches or they don’t. In this case, there IS a (correct) match.

A “Feature request” NOT to show non-matching items in the search function? It gets better every day…

I agree with you that such a feature request wouldn’t make a lot of sense. But you can’t expect the support team to “repair” something that isn’t “broken”…

BTW, I’m a big Mahler fan, too. Which Stokowski recording are you trying to manually identify? London Symphony, Fassbaender, Rice…?

Mathcing entry nowhere to be found. List gets filled with all sorts of junk.

This does not need to get fixed??? Serious? Really? 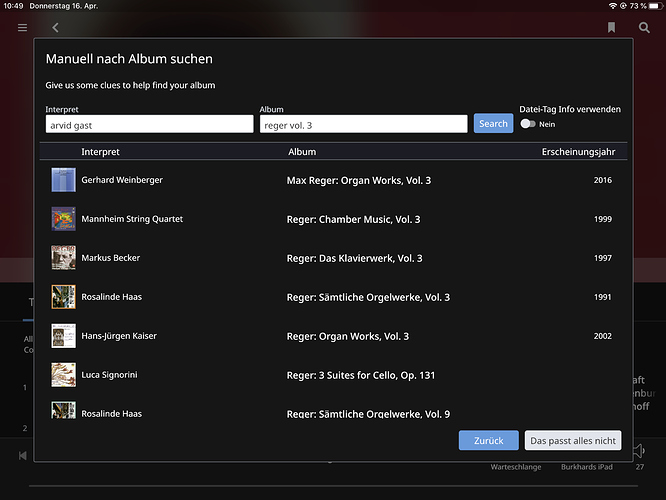 And then again: If it finds one matching, why list 25 opther non-matching items? Totally without any sense.

Not totally without sense at all.

The metadata provider may have used Janet Baker, the orchestra, or “Various Artists” as the album artist, or even misspelled Stokowski.

Metadata providers do different and sometimes strange things and, although we attempt to normalize out this strangeness, it’s not always possible.

For example, the MusicBrainz Classical style guidelines have the composer as album artist, something that we at Roon reject as a concept, but not something that we can always fix. OTOH, Qobuz albums are restricted to a single album artist. So this recent collaborative album has Anne-Sophie Mutter as the album artist. Too bad if you’re a Barenboim or Yo-Yo Ma fan and you use either of them as your artist search term. Etc. etc.

The search pretty much requires a match on album title, but there is more flexibility on the artist name. That we nail the search top result is great; the other items exist in case we didn’t.

I am not arguing with the first entry in the list. if that Shows “Stokowski/Baker” and I look for “Stokowski”, I would expect it to be there.

I would not expect Abbado, Levine, Rattle, Chailly, Fischer, Klemperer, Mehta and god-knows-who-else listed, just because they happened to have recorded this symphony as well (as have 50-odd other conductors).

Whats the meaning of a search function if it returns 90% totally arbitrary results? Just pretty pointless.

If you think there is a better way of displaying the results then create a feature request with the whats and the whys.