Why no Play in Track/Artist/Album-views? (Only Shuffle)

Perhaps i have missed something pretty obvious here but i cannot seem to play all tracks in a view without Shuffling them?

Lets say i Focus on my Genesis DSD albums. I’d like to play them all, but all i can do is Shuffle? (“Blanda” in Swedish) 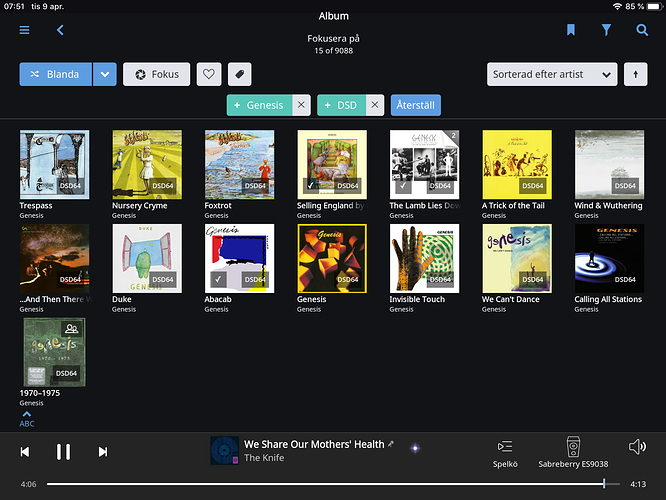 And when in Tracks-view, i focus on my Favorited tracks, and wadda ya know, i can only Shuffle, not Play; 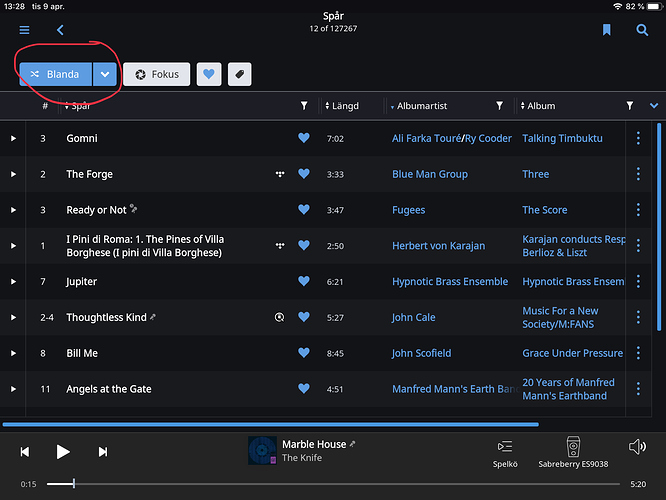 Likewise, i have a look at a particular artist, and would just like to play their catalogue of albums, in chronological order, but i can only chose Shuffle? 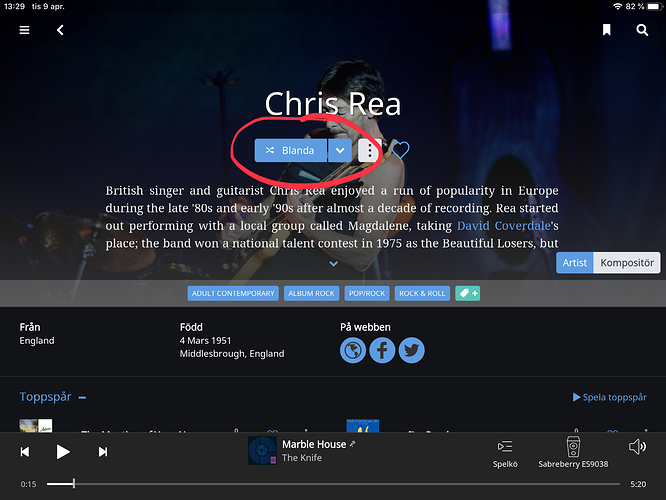 I’m not trying to take anything away, i’d just like an option to play a selection, in presented order.

For albums and tracks you need to select some (or all) first.
For artist, no can do I’m afraid.

Ah, thats a possible option. But, very finicky on a tablet…

If Shuffle is an option, i suppose Play could just as easily implemented?

The reason, I understand, is that there is no sensible order in these cases.
Play is an ordered activity.
In a tracks list — what order would you play them? Alphabetical?
Roon thinks, if there is no meaningful order, might as well shuffle.
Makes sense to me.

Simply Play in the order shown with the current filters applied. Seems logical to me. I dislike having to select albums after I’ve already ‘selected’ them using Sort and Focus.

I agree, partly, but what i’m saying (in a complex way) is that i’d like a way to play an artists albums in a predictable way. I.e. the order in which they are displayed. (Which in the first two cases are easily adjusted to preference, say in chronological order for selection of album)

I mean, there is a selection, otherwise there wouldn’t be any songs to Shuffle. Why force me to play the selection in a random order?

If I remember correctly, it is only when you see a bunch of albums under an artist that they are Shuffle-only. If you select some or all of them, they become playable. A little unintuitive but logical.

It’s a software engineering thing.
There are several different kinds of sets, and they differ on specific characteristics, and it’s important to respect those differences.
A list has an order, other sets do not.
For example, a playlist has an order, it is an ordered set of tracks and can be played in order. You may of course choose to ignore that order, to shuffle it, but the fact that it is ordered is an essential attribute of the playlist.
But the albums of an artist, or a genre, or a tag, is not inherently ordered, it’s just a bag of stuff. You may choose to display it in some order, e.g. alphabetical or by release date, but that’s a display thing, the set itself is not ordered.

I’d buy into everything you write here, if the Shuffle command weren’t available in unstructured selections either.

How do you mean, “unstructured collections?”
Here I have selected a few albums, and the play drop down has all the options.
I did it from the album browser, but I get the same when I select some albums under an artist.

Have a look at my first screenshot, it is a selection by using Focus criteria and the Album view sort order. It is already a selection, i used the word “unstructured” as the selection is not yet put into a playlist or queue.
I do understand the option of selecting some, or all albums, by long pressing and then clicking each album i want to add to my play queue. But i have already made a selection, why force me to select these albums again, before letting me play them in a repeatable order?

And in the Track list of Roon, i often select the heart-icon, for displaying my favourites. I’d like to play them in “last added” order… They are already displayed in that order, why make me select them again?

The scenario where Shuffle could be accepted would be on the artist page as there are som many different categories displayed as you scroll down;

Elsewhere, i have made my selection, dont force me to select again!

I’m not defending it, I’m just explaining it.

But I think your example with the artist page illustrates the dilemma that Roon is facing.
Selecting an artist presents a lot of stuff, you feel it needs making a selection to refine it — although the difference between Play and Shuffle is about order, not selection, so Shuffle would in fact go through all those categories.
Focus on albums you feel is already a selection, and it has an order.
Select a Genre, it shows a few artist highlights and a few album highlights (but it contains all the artists and albums you can reach by View All…), plus all the subgenres each of which contains a subset of those artists and albums — what would be the play order of that? Play all the artists in alphabetical order, then the albums in alphabetical order (which would duplicate), then the subgenres (which would duplicate again).
Select a Tag — contains albums and artists and tracks and composers and compositions in no order…
Of course it would be possible to dream up the rules for how the system should handle each case, but experience shows that a system that tries to be intelligent about anticipating users’ wishes but becomes unpredictable is not a good experience. It’s like dealing with people!

Wow, I wish I had the Genesis SACDs!

You can do what you want with just a couple of clicks. Just select the first album, then on the drop down choose Select All instead of "1 selected’, then click Play Now. 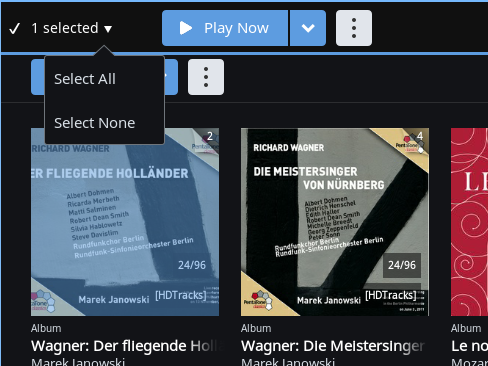 This is an interesting discussion, and i appreciate all of your viewpoints!
I do realize the dilemma of establishing a play order if the current selection is big and spanning over more than one category, such as the view under an Artist.

Which spawns another question really, when you Shuffle from an Artist page, is the selection from all of whats visible on the page? Including collaborations?

You could make this request as complex as you’d like, but i still feel that if Shuffle is available as a play command, a predictable and repeatable play order of the same selection should be easily implemented as a Play option. Of course that will generate other requests, such as "I want to play my selection in order of “Date Added” or “Date of release” or “Alphabetical by title” and thousand other options.

Let me rephrase then;
Let users migrate a current selection into a Play-queue by a single click?

This is nearing the “smart playlist” idea adopted by other software but i am having difficulties clarifying the idea in understandable terms. Sorry, i’m a bit preoccupied atm…

The lack of sequential playback does not make sense in common sense, which causes stress on the music.

I second Mikaels argument. I’d like to simply be able to press play, eg in the track section. Roon should play the order that I am seeing atm. Thanks.