Why won't Roon Android stay connected while in the background?

I run Roon Remote on a Samsung Galaxy S8. Each time I start the ap it must load, find the server, initialize and then present the last screen. That seems to take longer than is the case on a Windows PC, but is acceptable. What’s weird is that each time I switch away from the Roon app to another on the phone, it must start the process again. That doesn’t happen on a PC.

This happens on my S7 as well. Also I get weird lines of random pixel colors on the top and right side of the screen. This makes the android app much worse than the windows version. 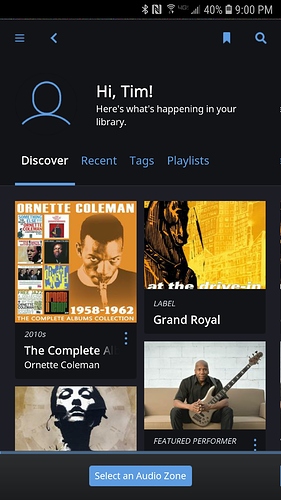 I’d assume this is an android issue, not so much a Roon issue.

This may be down to battery saving on the S8. Try going to Settings -> Apps -> Roon -> Battery . Enable background use and make sure that “Optimise…” is set as “Not optimised”. Seems to work for me on an S8 with those settings.

Same on my OnePlus 5. On my old S7 it didn’t do this but it would then not be able to connect to the core and got the constant initialising error when it came back to the forground. I wonder if this is a Roon fix to stop that or Oreo just handles thinks differently.

The Roon Android app was made to be used with Android. How could this be an Android issue?

Maybe because Android is full of bugs?

This did the trick. Thanks to all who responded.

Will try this out, thanks for the suggestion. Constant reconnects on Android has made me consider iPhone for my next phone purchase.

While this does stop it having to reconnect, iit has one major drawback it makes Roon completely drain the phone battery overnight if you leave it in the background. I had 48% left when I retire last night its dead this morning where normally it would still have abut 40-45%. I think I will stick with the reconnecting,

I have iPhone6+ and have the exact problems you guys mentioned including battery drain. Sometime it can’t connect at all! Got nothing to do with Android I think; Its Roon problem.

Odd, I haven’t had this issue but I don’t normally leave my phone on overnight…I’ll try sometime and report back. I have an Android 5ish tablet (actually Remix OS) which lasts around 2 days running as a Roon controller full-time. I also have an Android 7 tablet which has Roon open in the background for days on end without issue.

I’m running Android tablet and don’t have this issue. There are likely android settings that will affect this.

I have this issue on my S7. Tried literally every setting on the phone. It’s the only app that won’t stay up when in the background or screen goes off and has to completely start up every time. At least it returns to where you were once it reboots. I also have the exact issue referenced by Tim with like a single line of pixels on the top and right side with weird colors. I consider that a minor issue that doesn’t bother me much, but beware if you have epilepsy.

Roon is awesome! But Android seems to be a weak spot that could use some serious attention. Would love to get editing and Focus in the app. And someone in another thread mentioned fast scrolling. I don’t browse my library often that way but tried it and yeah, yuck. Lack of fast scrolling quickly becomes an issue after only a couple dozen albums.

Reviving an old thread as an FYI because this may easily be a FAQ.

One of the big disadvantages of Android is that it’s too fragmented: there are so many manufacturers, each ‘customising’ Android with its own features (or adding yet more bugs, depending on the point of view!). This means it’s almost impossible for developers to test that their app works flawlessly on every device, especially when the app is something that is meant to run in the background: each manufacturer tends to have its own battery saving features which, guess what, don’t play nicely with apps meant to run in the background. Oh, and I say this as an Android user who’d never use an iphone (I know, I had them at work).

Specifically, it is not uncommon to have to set two kinds of battery optimisation / background running settings: one for Android itself, broadly similar across all Androids, and one for the manufacturer-specific version.

With my Huawei right now, what I do with apps like email clients, sat navs and Roon is this:

I understand that Huawei phones are not sold in the US and that the settings may vary somewhat from phone to phone.

Android may be fragmented but since most apps on the same phone do not have this issue and these include other streaming software I have, one has to look to Roon for a solution here, if other app devs can do it so can they. I have found the Harmony App for my Logitech remotes is also prone to this so its not completely isolated to Roon .

Just updated my phone to the latest Android Pie as it just came available for my phone. No longer having this issue.

Problem is the roon app:
The only way in Android to make sure an app is not killed by the OS, is to implement a foreground service with an ongoing notification in the status bar. Media players typically do it like this, they display a symbol in the status bar. If an app does not do this, it can be killed any time by the OS, this is by design.

I don’t know why roon is not implemented like this, probably because it is not a native android app. Unfortunately…