Will the gear I have work for HQ Player in Roon?

I have been reading a few HQ Player threads of late and thinking it is something I should at least try.
However…
Before I dive down that rabbit hole I would at least like some advice if the gear I have at present is capable and just how I would set it up to trial it.
Onwards.

I use right now an Antipodes Edge as streamer, Roon Core and renderer going straight out via both USB and SPDIF into my Mark Levinson 585 onboard DAC…and it sounds darned good!
Obviously HQ Player cannot be added to that so…
I have the main home Acer WIN10 PC or an old WIN10 Dell laptop that is pretty much bare bones as I used it to host Roon core when I first trialed that.
I assume I could install HQ Player on either as long as all on the same network.
So idiots guide time, what would I need to do and how best to configure everything?

Kevin I have been playing with this recently on my i5 Nuc 7 (my former Roon Core)
I started off playing with Ubuntu and ended up testing HQP embedded as it is just so simple to boot up from a memory stick. I’m unsure this is the best way to do this, but it was certainly the easiest to get going with.
I will follow this thread myself to learn more.

With embedded and the Zen Stream I was listening via Roon in about 20 minutes and most of that time was scratching my head about what I needed to do. Then I had music (and a lot of fan noise

Look forward to see where this thread goes

It’s going to be on one Win10 PC or another for now as really not too interested in buying anything else right now just to test it out.
And if that’s not feasible then it’s likely a still born project for now.

So you could install windows app or boot off a memory stick with embedded version.
Took a couple of mins to write the memory stick and boot up. Then no issues or other windows software to get in the way

(and a lot of fan noise

Where was the fan noise, on a scale of hair dryer low setting to fighter jet takeoff?

Definitely agree HQP OS on USB stick is easiest to use but also most optimised.

It’s going to be on one Win10 PC or another

Use it on the more powerful machine and put that machine outside your listen room so you don’t hear the fan noise.

Once it boots from USB stick, find out that machines new IP address from your router.

Then just use that IP when you add HQPlayer zone to Roon. Roon asks you for the IP address of the HQPlayer machine.

You can download HQP OS below and use etcher to burn to USB stick.

Fan noise from start of playing music, the Nuc is in its original case and I think I pushed it a bit hard with some of the options I chose. I can tell you the chasis got a bit

I have been following one of your other thread’s since then and dialed the settings back a bit. But with travel and holiday I have not really had time to get back to it as I was hoping.

Use it on the more powerful machine and put that machine outside your listen room so you don’t hear the fan noise.

This or have a silent Case.

Once it boots from USB stick, find out that machines new IP address from your router.

A little confused on that?
Why would the IP address be " new"?
The main PC is the most powerful and I do run Roon Remote on it at present.

It will get an IP address via DHCP and you need to add that to Roon so you can pick it as a streaming endpoint. (In Settings->Setup)

Right bed for me now, I hope you have it all working when I wake up

Take the blue pill and write a memory stick with the embedded HQP on and boot from it.
Hopefully all will make sense then

Then when HQP boots up a Linux machine everything will be ready for you to add it to Roon and start the next level of your journey.

A little confused on that?
Why would the IP address be " new"?
The main PC is the most powerful and I do run Roon Remote on it at present.

But it might if you run HQP OS on USB stick. It boots a custom Linux OS. You can’t run Windows simultaneously. It wont do anything to your Windows install as Michael mentioned earlier

I m obviously missing something, I set hqplayer as audio zone in Roon and when i hit play it shows as playing and the signal path looks fine but I get no sound out of my system.
Now also when I look in hq player settings it does not show my dac at all so I cannot select it, I assume that is the problem. 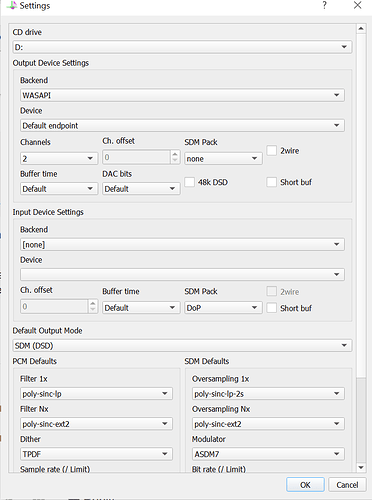 Went through similar in another thread.

So can you detail your system config

What machine is connected to what, is it USB or ethernet , what is in same room or different room

The win10 pc I installed hqplayer on is upstairs connected to router by Ethernet.
Not connected to anything else at all.

In my music room downstairs is a unmanaged switch directly connected by cat6 to the router upstairs.
This connects by Ethernet to the Antipodes Edge which is streamer, Roon core and renderer.
This is connected to my Mark Levinson 585 internal dac by both usb and spdif, simply because I am still continually comparing the two.
The 585 dac is limited to 24/192, which is exactly how I have Roon up sampling to and works perfectly on both inputs from the Antipodes.
This is screenshot of the hqplayer signal path just in case. 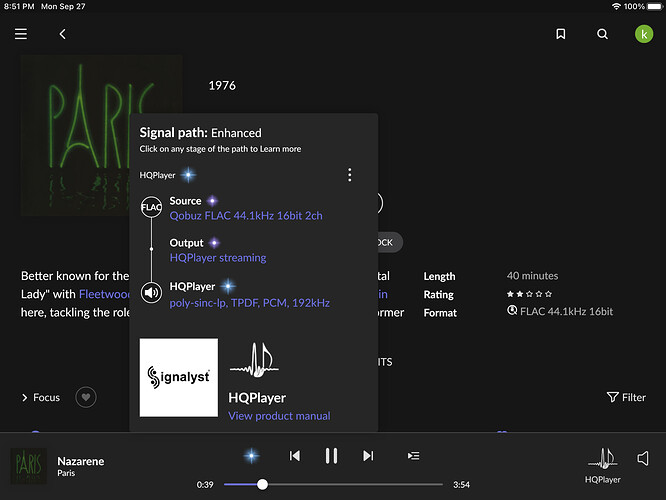 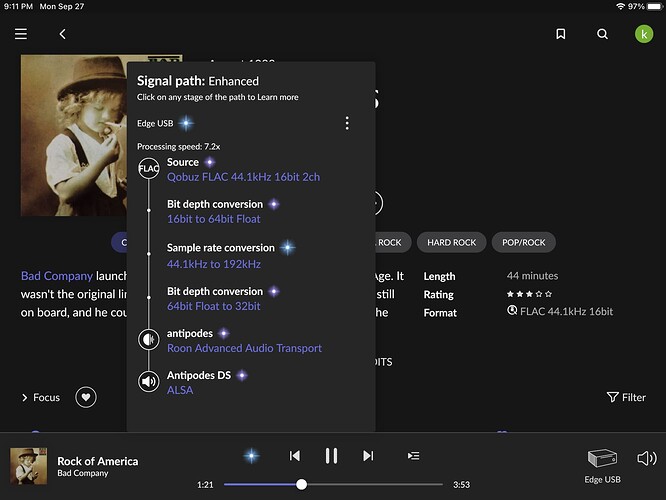 This connects by Ethernet to the Antipodes Edge which is streamer, Roon core and renderer.

Ok thanks, this is very similar to this other thread yesterday

Getting HQPlayer to Output to DAC - #21 by dabassgoesboomboom

So you will need to test with a different endpoint.

Easiest is if you have a Raspberry Pi4 - burn NAA OS to microSD, link below. Connect the RPi4 to your USB DAC.

Then HQPlayer will “see” and communicate with RPi4 NAA and your DAC.

Since your HQPlayer is in a different room obviously you can’t connect a USB cable direct to your DAC.

That’s why that other thread went in circles for a few days - we didn’t know DAC and server were different rooms and endpoint only supported Roon, not HQPlayer

Well that’s saved me a lot of aggravation….mucho gracias!

Part of the reason for getting the Antipodes was to eliminate lots of boxes and cables which it has done spectacularly well.

If there is no way to use hqplayer with what I have then it’s a non starter and this was very worthwhile and all the help is very much appreciated indeed.
But I really don’t want to add anything else if can’t get it to work with the Antipodes.

I will email antipodes later to see what they have to say about hqplayer native support.

Amazing what you can learn by reading the manual……. 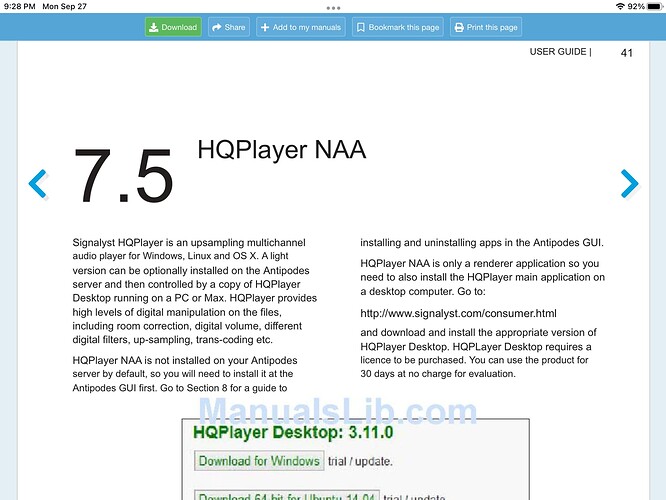