Windows app is not finding any local audio sources.

Primary audio device while using Roon is the RME dac (top of the list below)
All audio devices listed below (as reported by MsInfo):

This is the audio section of settings in the app. To clarify, before someone follows any red herrings, the machine in question and the Roon Core are both on the 192.168.42.0/24 network and has been working quite well up until ~4-6 weeks ago. There was a point at which I would start the Windows app and it would not detect my local audio devices so I would restart as administrator and that resolved the issue. Now, not even that is working. 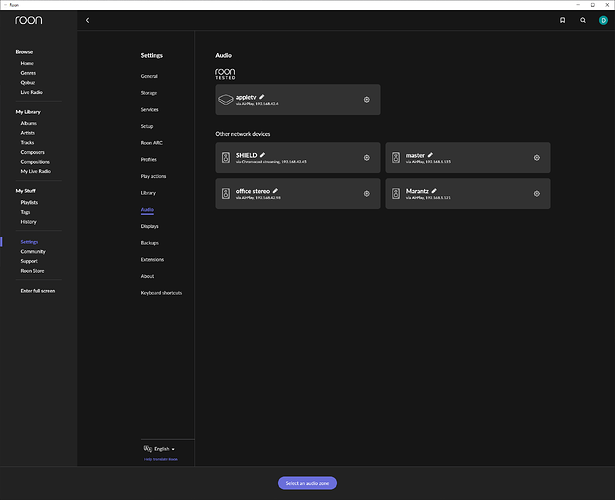 Other apps like Windows Media Player, VLC, Firefox, Chrome, Star Citizen, etc, play audio just fine through the on-board audio (Realtek) and the RME DAC. These are not running at the same time as the Roon app.

It’s not clear to me where the screen shot came from. Is it from a second computer running Roon remote to control the core that is on a different computer?
If so, do you have firewall turned on on this machine? And further if so, do you have Roon.exe and RAATserver added to the exceptions for the firewall?
A test would be to turn the firewall off for bit and see if that fixes it.
see this KB:

Generally, Roon should be able to see and connect to compatible remotes and devices without outside input, but there are cases when this is prevented by the the OS firewall or an installed Antivirus. To determine if this is the case, you can: Turn...

Windows update sometimes “fixes” your settings for you, so would not be surprised if that has happened.

That screenshot is from the “Settings” > “Audio” tab in the Windows Desktop App of the machine in question.

There is no firewall between the Windows machine in question and the Roon server, including either of the machines themselves.

I read that “Everything in the Support Category is reviewed by staff”, but there’s no definition on responses or times.

I would love to be able to use the products for which I’ve purchased a lifetime subscription, but with it completely failing within 6 weeks of having done so I’m developing some buyer’s remorse.