Sometimes roon will split a single album into two or more albums. This has been happening more frequently after recent releases and there are several support tickets.

Have you tried doing a search on Wham! (or Wham) to see if there is another copy of this album with the missing tracks? If you highlight both incomplete albums and then go “three dots → edit → merge”, you will be able to merge both albums (or more if necessary) to make a single complete album.

The other option is to remove the offending album then do a Settings > Library > clean database then add it back , if it’s split as Tony suggests then you will see 2 albums easily on the home page

Hey Tony, thanks for this but I’ve already checked and it’s not a split album.

I will try this, and report back.

Edit: I’m sorry to say this has not worked. Still only 4 tracks showing and no duplicates or skipped files.
Edit2: Are there any logs we could check to see why the remaining tracks aren’t being imported?

As a test, I imported a new album and again it only imported 2 tracks of a 9 track album.

I had a similar issue some time back. Here’s my post regarding a work around I found that solved the issue;

I have a similar problem that started with 1.3 and continues. Every time I add an album to the Watched Folder only the first track or two will display. My work around is to have two folders in my Music Folder (designated as the Watched Folder). I add the album to the first folder (and Roon only shows first track or two). I then transfer it to the second folder (where all my albums reside). As soon as I do this Roon picks up all the tracks. The folks at Roon (and Salk Sound, the maker of my str…

If the procedure I described isn’t clear, let me know and I’ll try to clarify.

For some unknown reason, I now longer have that issue.

Very interesting. I will try this and report back.

Edit: This worked! Thank you so much! I just created a dummy folder and added it to the list of watched folders.

The issue now is there are duplicates.

I never ended up with duplicates. Make sure when moving the album from one folder to the other you are actually moving it and not copying it; ie - removing it from folder 1 and placing it in folder 2 so that you don’t end up with 2 copies of the album (one in each folder).

If you actually have only one copy of the album in your watched folders, try having Roon rescan the Watched folders.

I go to Album view and select the last two albums added and it will not let me delete these albums: 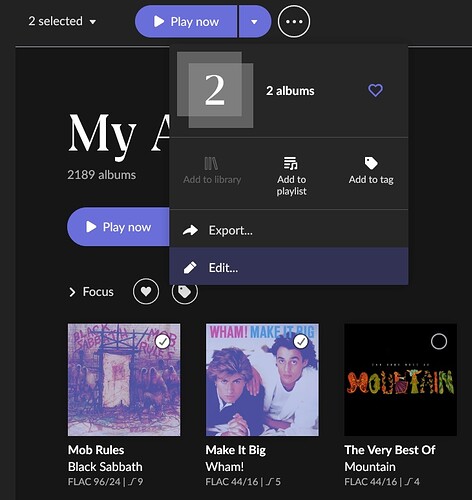 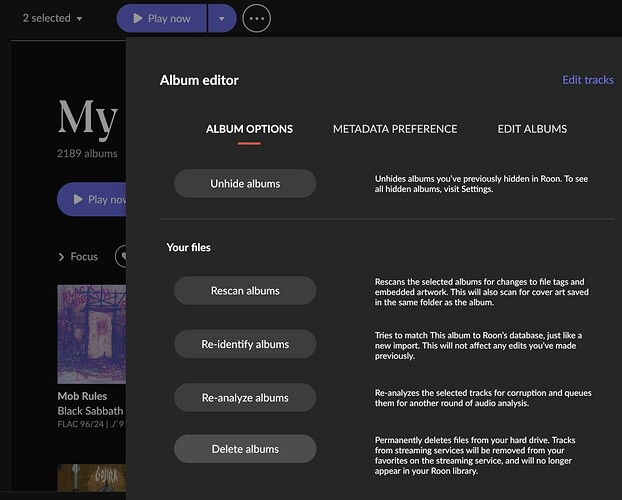 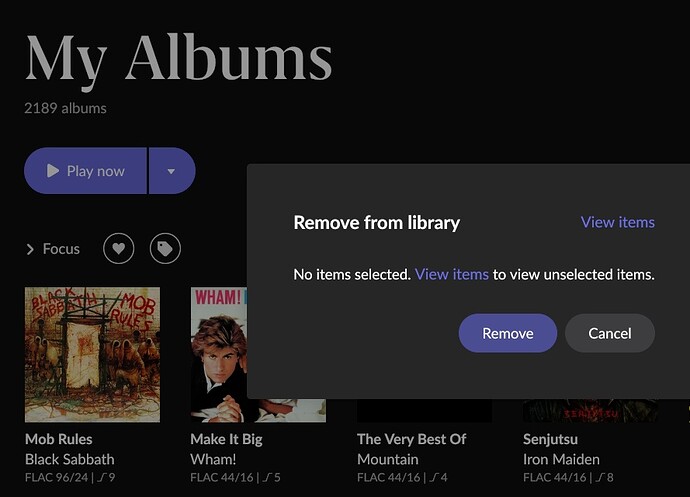 I’m stumped. I already tried cleaning up the library a bunch of times to no avail. These two albums just won’t go away.

Have you tried a reboot? I found a couple posts where rebooting the core and/or the server cleared the albums that no longer exist in the Watched folder(s).

Another worthwhile little trick ( actually a Roon recommendation) is to close Roon down whilst importing new albums to your library.

A good tip if available to the user.

Unfortunately, in my case I cannot shut down Roon core without shutting down my Salkstream III streamer which also houses my music files. I guess I’m lucky my workaround didn’t introduce other issues like the OP is experiencing.

Same here with my Antipodes Edge…lol.

So I can’t always practice what i preach😊

This whole thing started after a reboot. I’ve done it twice since.

But I’ll do it again in the morning and report back.

Whoa! You mean shut down the core during an import?

No
I mean shut down BEFORE you add the music to a Roon watched folder.
A fairly common practice for many here is to import your fresh rips or downloads to a non watched folder.
Make any metadata edits you might wish to do.
Then shut Roon down and then copy them over to the watched folder.
Then restart Roon.
Yes it’s an extra step but usually pretty bullet proof.

I do as you described, except for shutting down the Roon core before moving the file to the watched folder (not an option for me as I mentioned earlier).