After upgrading to 1.3 (233 and then 234) I get an incorrect album cover displaying for two recently added Tidal albums:
Roger Waters - Is This the Life we Really Want?
The Beatles - Sgt Pepper’s Lonely Hearts Club Band (The newly released one)
See below for an example of the Roger Waters album: 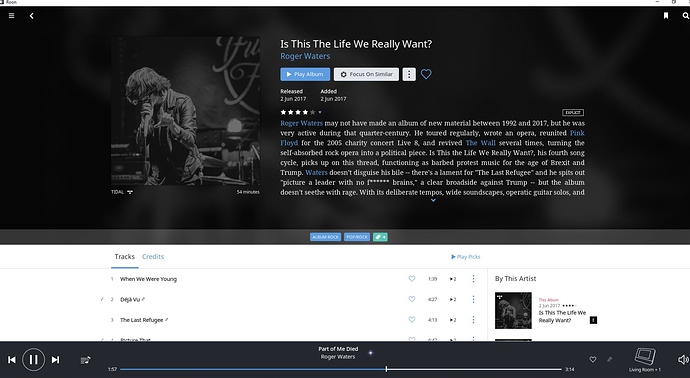 The album displayed is a Navarro download I did some time ago where there were two different versions of the same song, FLAC vs MP3. These tracks are stored in the top directory for my music library on the Windows 10 PC running the Core. No other tracks are in the same location.

I’ve tried to manually identify these two albums and the Roger Waters is correctly identified and saved, but the album cover remains Navarro, as displayed in the picture above.

I have cleared the cache and restarted but the incorrect album cover stays the same for these two albums.

(The Sgt Pepper identification seems a bit more off kilter where roon does not find a perfect match, hence sticking with Roger Waters example for this specific case).

Below is a snapshot of the Overview screen. As you can see these two incorrect album covers are interspersed by another cover:

No biggie but would of course like to find a way of restoring these two album covers to the correct ones, without moving the Navarro tracks, if that can be avoided.

Thanks for a great product and very nice updates to the software!

Ooops! One more restart of roon core and we’re back to normal again.