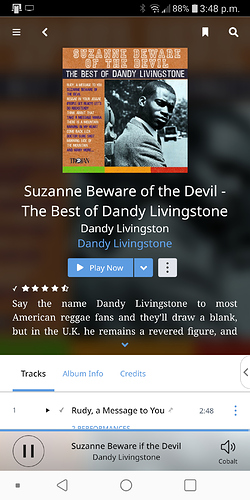 Thanks for letting us know, @Greg_Beardall. Our team is investigating how we can do better here. Your report is appreciated!

More metadata track listing errors: The track listing for Tidal Album, artist: Frank Zappa, album: The Grand Wazoo is listed in the wrong order and mis-labeled. I wish there was a way for knowledgable users to edit these errors!?

Hi Greg. We currently have a fix in the works for a problem where the track order for one release of an album is applied to a release with a different track order. Strictly it’s not a “bug”, but a real problem where we’re not being resilient enough to bad metadata (which is the root cause). It looks like the (undeployed) fix has done something for this album.

Please would you verify the correct running order for your album and what we are are currently showing?

I wish there was a way for knowledgable users to edit these errors!?

Unfortunately, not in this case. This was quite a subtle problem – very hard to pick up in development and testing – but one that we are now aware of and in the process of fixing.

Unfortunately, when I now open the album from “my library” (where I know I have the “correct” metadata info, confirmed by both Discogs and MusicBrainz) the track listing and order on my Roon listing of this album is being overwritten by incorrect metadata from the “Tidal” listing supplied by Roon (that is wrong!).

Previously I could edit my folder (in my local library) and select, “use file source”, now the edit option has disappeared entirely when I select my local folder version and the previously correct track listing is being overwritten by the incorrect metadata from the Roon Tidal album listing, which is WRONG!

Example album that I am working with here is Artist: Frank Zappa, Album: The Grand Wazoo If I log out of Tidal services within Roon the afore mentioned folder returns to the correct track listing and order.