Xfer files to SSD installed in my Nucleus

I installed and formatted an SSD in the Nucleus my nucleus, so now I am ready to export the files to the drive. I’ve read the threads on exporting/importing files on the Roon support page, but I have a problem. I can see the Nucleus recognized on my network, so I went to the Data/storage subfolder, which I assumed must point to the SSD. However, checking for Properties it shows 0 bytes. So presumably that doesn’t refer to the SSD? Where do I find it?

I can see the Nucleus recognized on my network, so I went to the Data/storage subfolder, which I assumed must point to the SSD. However, checking for Properties it shows 0 bytes. So presumably that doesn’t refer to the SSD?

Can you share a screenshot of this folder and the Properties issue you mentioned?

Thanks for getting back. I took the screenshot but I don’t see how to attach it here! 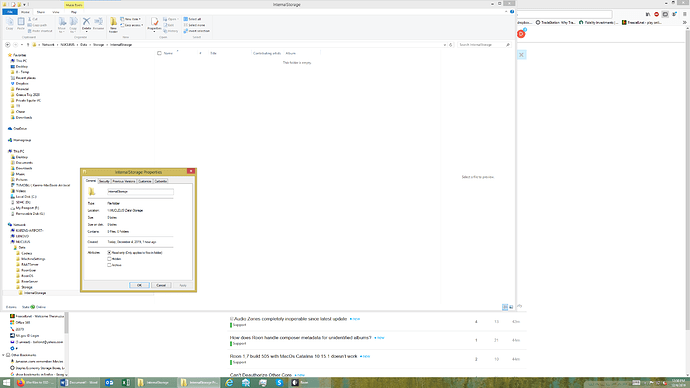 Well, I did consider that, but in every other instance where I’ve checked space you get two readings - used vs available. Here there is no indication of the latter. But in any case, if you tell me I should just drag-and-drop the music files to that file lableled “Storage” I will do that. I just wanted to make sure I’ve identified the correct target.

but in every other instance where I’ve checked space you get two readings - used vs available.

Only on drives, AFAIK, not on folders. And you can drag and drop files to that folder labeled “InternalStorage” - it is the correct target.

Edited to name the correct folder

I am now frustrated beyond words. I successfully formatted the SSD and tried copying all the music files from my desktop drive to the “Storage” folder, thinking that was the correct target, as you indeed confirmed. But copying job abruptly stopped not long after it started and just a short way through the process, and popped up a message saying there wasn’t enough space. (I didn’t remember to take a screen shot of that.) Huh?! My entire library of CDs takes up way less space - maybe 25-30% - than the 2T on the drive. So I checked System Status and observed that under “Internal Music Storage.” It says “OK” - and also indicates that 100% of the 2T is still available. So obviously “Storage” folder, whatever it is, doesn’t corresponds to the SSD, or else on Roon it wouldn’t register as completely unused.

As you probably have sussed out by now, I am no tech expert, just familiar with basics. Can’t a live human being on your support staff can call me?! Or I will call one of you, but I have no idea how to do that.

Your screenshot showed the InternalStorage folder, and I assumed that was what you were going to drag and drop your files to. I missed that you referred to the Storage folder in your previous message.

The Nucleus manual in the Knowledge Base contains a section on copying files to the Nucleus.

I read the instructions on the link you sent (screenshot of details attached). However, there is no "Internal Storage Folder included under “Storage”, as you will see in the second screenshot here. On the one hand that suggests to me that Roon doesn’t recognize the SSD I installed; but on the other hand I was able easily to format it and got the expected confirmation afterwards, so must have recognized it. 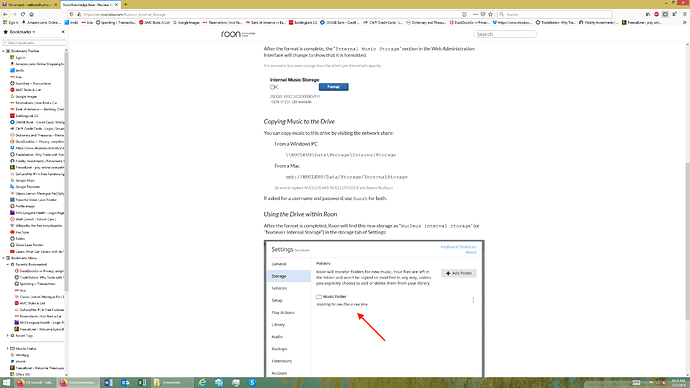 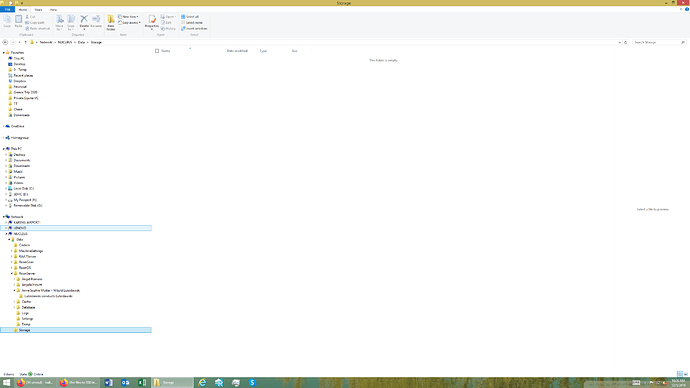 Right, let’s take this one step at a time.

I get it, and it all makes sense. The problem I’m having is that the sub-folder “Internal Storage” no longer appears. I checked my earlier screenshot and I see you’re right; it did appear then. But it no longer does. (See the screenshot from today.) 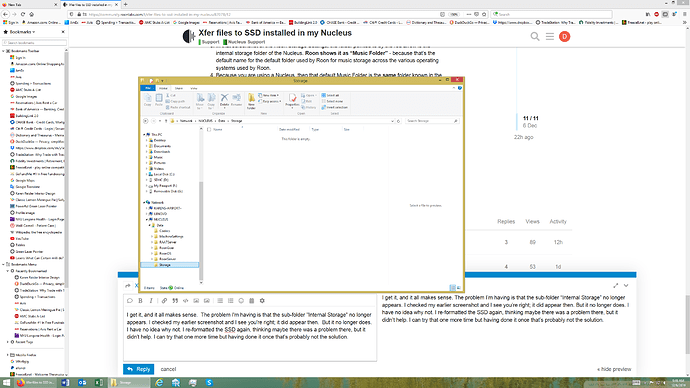 Ah! - So here’s the issue. I see that the internal storage is “disabled.” See the first screenshot. I don’t know why or what to do, but I clicked on add folder, and found the second screenshot showing that there is no folder listed to click on. I am baffled. 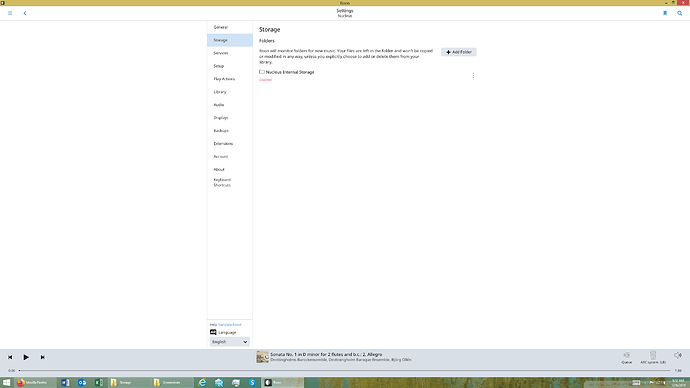 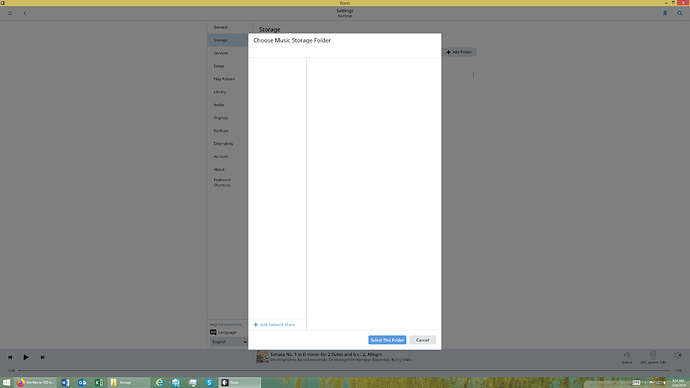 So on the screen where it says “Disabled”, you can see the “3 dots” option menu on the right. Click that and choose the re-enable option. I suspect then you will see the folder back in Windows File Explorer.

I do appreciate your sticking with this. I was so sure this would do it. Alas, one problem just leads to the next. So, I did what you suggested, but it wouldn’t recognize the drive. See the four screenshots attached here. Should I reformat (again) the drive? 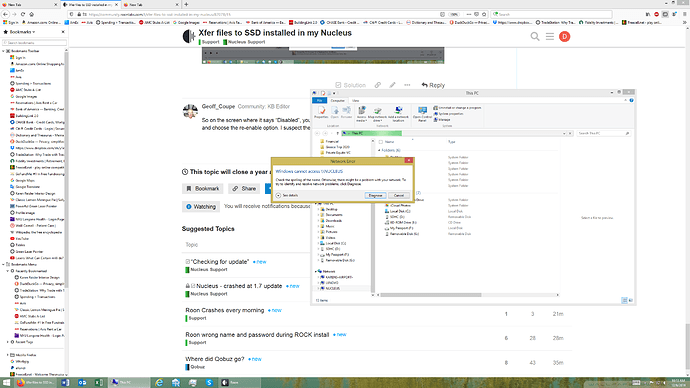 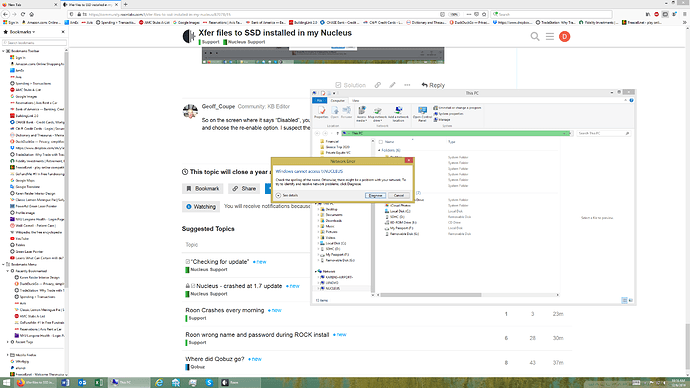 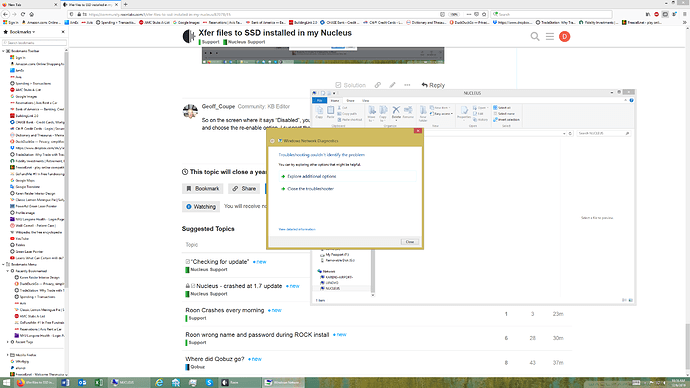 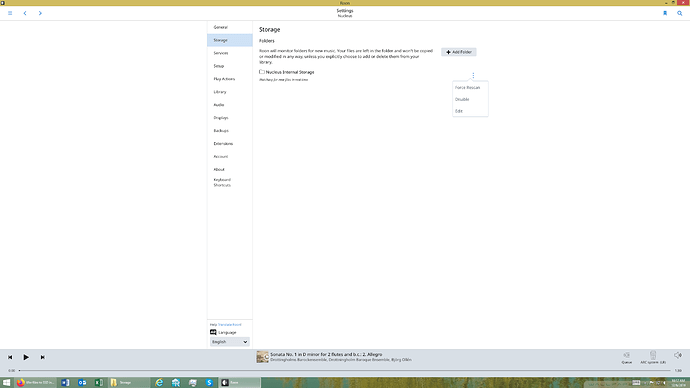 That first screenshot (can’t access \\Nucleus) seems to point to a network issue, whereby Windows File Explorer can no longer see the Nucleus over the network, yet the Roon client can (because it’s showing the Music Folder screen). I don’t think you need to re-format the drive in the Nucleus again. Let’s try the old reboot trick - reboot both your PC and the Nucleus and see what happens.

OK. I will do that and get back to you…

Dinner? Fair enough! In the meantime: success! At least in getting the Internal Storage drive to reappear. Now the only question is whether the files will transfer successfully. On to try that now…

It took quite a long time and a lot of steps, but…“success!” Just to be sure everything transfered, I checked to make sure the source folder and internal storage folder address the same size. They are.

One last question: can I rename the Roon folder?