Years in Focus - which date category is used?

Set a focus to listen to Jazz 5 Stars Albums without 40s and 50s.
Below is the screenshot. However Roon plays albums recorded in the 40s and 50s. Is the years focus related to release date? If so does this make sense, or shouldn’t it better be selectable which kind of date one wants to focus on? 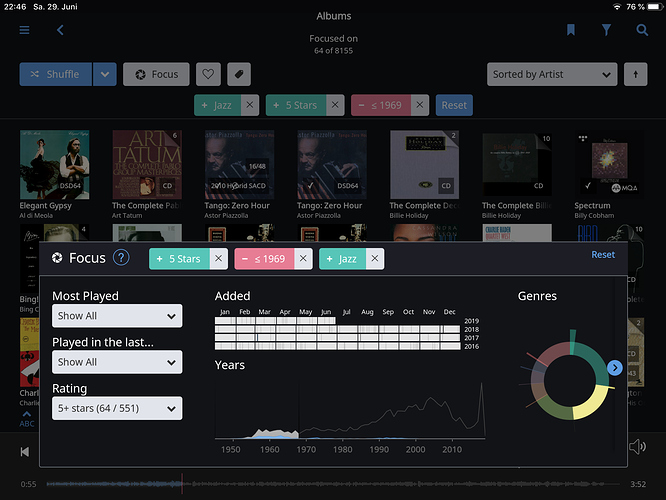 When I select by years using Focus, roon appears to use release date and not recording date. And that’s a problem. For example, if I want to use Focus to listen to jazz recorded in the 2010’s I end up with some that was recorded decades ago. In particular, setting Focus to 2010-2019, the set of albums includes half a dozen by Art Pepper, who died in 1982 and whose music, while immimently ernjoyable, is hardly characteristic of the jazz of the 2010s. And these are not reissues, but the original i…

Unfortunately, there has been no response from roon staff. I suspect that the reason that Release Date and not Recording Date is the date used in Focus is that Release Date is a property of Albums where Recording Date is more a property of tracks (an album can have but one release date while being composed of tracks recorded on many different dates) and roon is very - some might think excesively - album oriented.

Nevertheless, each album shows recordings dates in the album view.
So the metadata are existing. It’s just a question of willing to analyze within years focus. By the way, there’s also a focus function on tracks see screenshot below - using album release date here is even more useless.

That’s why I flag @support here. 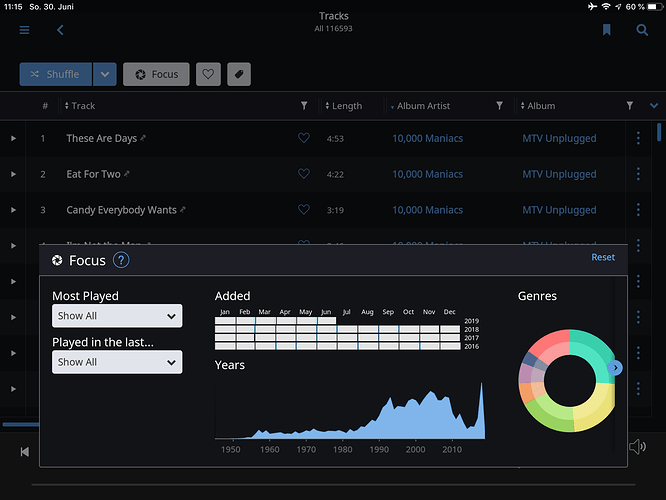 Agree @NOA. Focus needs to be able to use ‘recording date’ to be useful. Focusing on ‘Release Date’ makes for a terrible listening experience for a number of reasons including:

Has this been raised with @support or has any official response to this been provided?

Feel free to add your voice to the according feature request:

Hi, Sorry if this has been requested before… Can you please add an extra option to the Albums Sort By so that album can be sorted by Date Recorded. I have tons of Jazz and like to see my album listed chronologically by when the artist recorded the music rather than when it was discovered/released/reissued so that each type or period of an artists style of music is grouped together. For example, for Miles Davis, grouped by each decade/style - cool -> modal -> free bop -> electric -> 80’ rubbi…

Not that roon is perfect, but have you thought about the problem of sorting an album by recodring date when the album has multiple recording dates? For example, which date would you use for the Mingus group’s album I Am Three?

And it’s not even the case that the tracks would have been recorded as close together as those on I Am Three. The dates on Sonny Rollins first Road Show album range from 1980 to 2007.

So it isn’t enough to say roon should add album sorting by recording date, you need to explain how to do it when the album has various, wide-ranging dates.

Of course, your preference can be completely different from mine

While this might work for the I Am Three album, it would seriously mis-represent the Sonny Rollins I mentioned and would be even worse with a compilation disc, such as the Complete Webern which has different groups, all of whom recorded at quite different times.