Yet another 1.8 BUG : can’t delete a Qobuz Album

It is the first time, on any release of Roon, that I am unable to delete a Qobuz album regardless of the view/panels I am using. Message of error : “no selected item”. See screenshots.
I am clueless. 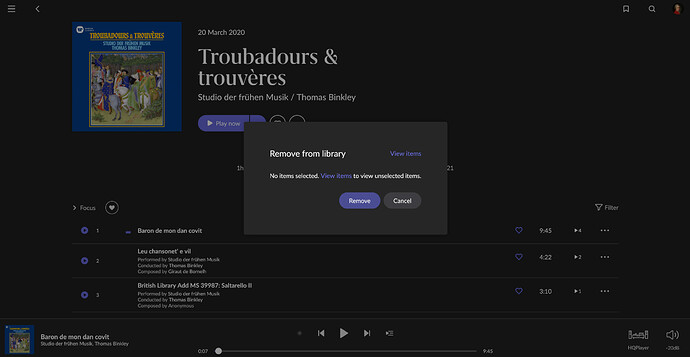 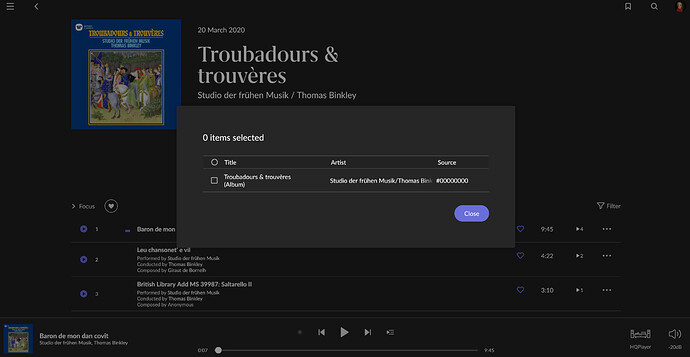 Ok, here is the solution, in case anyone stumbles upon the same bug : 1) log out from Roon, 2) reboot server, and 3) re-enter credentials. Ta-da : Album has vanished into oblivion.

Still. Another irritating bug that has to be fixed in a hopefully soon to come update.

I just need to add that some people found appropriate to flag my previous post and that it was moderated because I replied ironically (but still politely) that I wasn’t asking how to delete an album, which is a straightforward task, but that I was reporting a bug.

I must admit that I am quite new on this forum. I was trying, like I did before (too much perhaps) to contribute positively by helping developers to identify bugs. Some people here seem top have a short fuse. I must admit that this form of censorship could discourage me, if this post were to be moderated again, from contributing again in the future.

Just for clarity, I did not flag your post. You said you could not delete a Qobuz album “regardless of the view/panels” so I explained how I delete albums from the Albums view. For some reason, you did not like that answer and dissed me. Another person flagged your post and now it has been moderated.

I still don’t know and don’t care why you took exception to me trying to answer your question. You said “I am clueless” which indicated to me you were asking for help. For your information, a lot of what is reported as a bug, is not a bug but simply a change. Most people are happy to learn how the new method works.

So here is what the insult looked like : "Are you really teaching me how to delete an album? Thanks bro, I never figured that out.

" To me it’s called irony. Perhaps the answer was a bit rude, but hey, does that requires censorship? I am sorry if it was offensive to some.

Maybe I didn’t express myself clearly. I am sorry, English isn’t my first language.

In any case I appreciate your desire to help, Jim. Nothing personnal there! Thanks, and farewell.

In case others would run into the same issue, here is what I found today.

It is apparently a syncing issue between Roon and Qobuz.

On rare occasions, when a qobuz album is deleted, it will, for whatever reason, remain in the library. If you try to delete it again, it will show the “no item selected” message, and the “remove” button will become unresponsive.

The simplest solution that I found is to go to Settings > Services > Qobuz edit > sync library now. I suppose one can also wait until the next core reboot or the next autosync, although I don’t how frequently they run.

Perhaps it is your particular Roon configuration - that is, what your Core is running on.

Just to clarify, deleting qobuz albums work instantly most of the time, though on some occasion, a qobuz album will stay in the library and require a new sync to disappear.

Hypothesis : might it have something to do with windows temporarily protecting certain cached files or folders?

Maybe it’s my particular Windows core/installation, maybe not. It’s hard to tell! (In any case, since the “sync now” option resolves the problem, it’s after all a minor issue). Anyways, if other users notice the same behaviour, please report it.

@KML I had an issue around moderation when I objected to a user hijacking my post with my feedback. His comments were allowed, mine were not. I was not rude, just asked him not to comment on my post with opinion. My post was deleted with the person’s post remaining…
I will now only occasionally browse this forum and use for support if needed. Other than that I just look for Roon news and ignore.

Thanks for the feedback here! I’ve enable diagnostics so we can look into what happened here. We appreciate the report!