Roon shared the good news earlier today. The Zen still shows up as not ready on my core, and I have the latest version installed. Do I need to reboot and or update the Zen to make it Roon Ready?

Is this really true, I will try it tonight.

It uses Roon bridge but that doesn’t stop HifiBerry being Roon ready.

It usually requires a server side update from Roon as well. Have you tried /dev on the Stream to get a beta update?

I will have a look tonight and see how it goes

Thanks Michael for your continued help here. Since Roon announced it on Instagram, I’d hope and assume this applies to release channel software for the Zen. The question remains - does the Zen need to be updated to activate Roon Readyness?

Sometimes it requires an updated firmware and sometimes just a back end change from Roon if the updates have already gone out. I

I will let you know when I have tried the dev option when I get home later tonight. Zen always seem a little late with their updates, but I had given up waiting so I will be happy when it happens.

Israel I did the latest beta update on my stream and I can confirm it’s still not Roon Ready. Hopefully very soon. 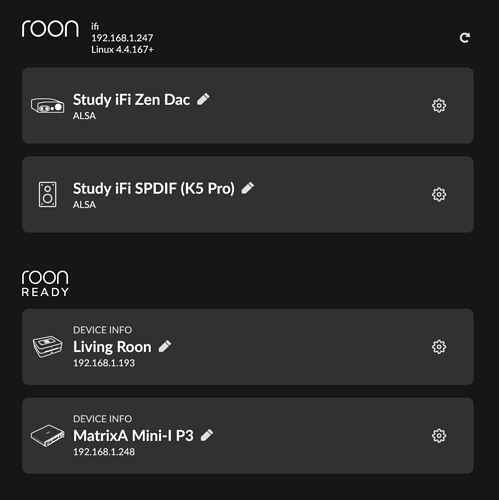 If you want to change the icon of loudspeaker to Zen Stream icon you can just identify this device as Zen Stream (instead of K5 Pro). But in my experience it doesn’t change anything beside the icon…

Piotr I have a FIIO K5 running off the digital outs as well for testing purposes.
There never was an icon for the the Zen when I added mine a year ago, but thanks for letting me know it is there, I have added it now.

Doesn’t change what Isreal was looking for though which was the Roon Ready status which is not yet showing up.

That possibility has appeared just a few days ago. When I noticed that - Zen Stream was still not even listed on Roon website as Roon Tested or Ready.
Now it’s listed but nothing more has changed as far as I can see. We most probably have to wait for newer firmware and/or Roon Bridge.

Yes that is the discussion that Israel and I were having.
Hopefully only a week or two and it should be sorted, otherwise I cannot imagine that Roon would have listed it yet.

A few people on the head fi board have posted that it shows up at as Roon ready if you download a new beta firmware for the Zen. They are also reporting issues with the USB output and Roon after updating to the new Beta. Sigh.

That feels a little deceptive to me. If this functionality is only available in a beta, Roon should not have announced it yet. Wait until it’s available in the stable release channel.

Israel I downloaded the new Beta firmware yesterday, but maybe that is only available in some markets at the moment. My guess is Zen said they would make it available but are doing it slowly. It is common for Roon to certify in and then the manufacturer to have to push out an update to get it all done. It just means Roon are not holding it up now which is good.

I have always been very happy with my Stream as a Roon endpoint and hopefully soon we will get the RR certification, that will be great.

Gents a little update, another beta firmware released in the last few hours

And low and behold

So the downside of this is you can no longer have both SPDIF and USB output active, so now I have to go into the IFI web page and change them over, that has just taken me a couple of minutes to work out.

If you want to try this just add /dev onto the web page and enable beta firmware and off you go to the settings page (though it’s possible you might have to do two of these, though unlikely)

That is correct, if you were asking about the Zen Stream then it is a pure digital transport without conversion or filtration.

Phil confirmed in my post above as well using the Latest beta.
Only problem I see is that you can no longer change output in Roon and need to use the web page or the app.to switch output.

Other than that all is great

For clarity - Roon Ready is only available now in the beta, not the release channel firmware of the Zen. Is that correct? Thanks.

I can see one other and quite surprising problem - it’s impossible now to select DSP Volume Control - only Device & Fixed are available.

Bitrate LED colors has changed also - but now it seem to work at least consistently and distinguish DSD & MQA from PCM.

Besides that Roon-Zen integration seems to be better. Signal path is more detailed, track info is displayed on ifi console.

These are the things that have probably taken so long to get RR signed off. I have seen a few funnies with the LEDs, but I’m guessing it is because I jumped around testing it.
I will do more testing over the weekend, but so far so good

Yes that is exactly correct.
My guess is that they will roll it out over a few weeks.
It’s an easy update, so it might be worth trying anyway if you want to test it out early

What I found is that if I leave it in roon exclusive mode my roon only identifies the coaxial, to have the usb I have to change the switch in the back to all in one and have access to the web interface to activate the usb. But if I put the back switch for roon only position the USB disappears again and the dac does not play. Also my dac supports DSD256 and the Zen Stream only plays until DSD128 giving error on the 256 file, on the SoTM the 256 files passes to the dac perfectly.

Did anyone have the roon position on the back and the USB working on the beta?

Yes, same here. I use the USB port to go into my Rotel 14 MKII and in Roon exclusive mode I hear nothing even though the streamer is streaming. Have to go into AIO mode and then it works. Oh well it is a beta.