App no longer finds the Antipodes as ‘Living Room’ zone via WiFi. I can connect to Devialet via Air, but then I can’t group with the other two zones. Living Room and other two zones have been stable for years but now I can’t reestablish the LR zone.

Have you tried any basic troubleshooting such as rebooting everything including the network equipment?

Just to confirm, @Keven_Clancy — The Devialet connected via USB is the zone that doesn’t appear, but everything else does. Is that correct?

Have you tried rebooting the Devialet?

Can you try using a different USB cable to connect the Antipodes and Devialet?

Hi, I have rebooted everything and have checked all connections.

Correct that the disappeared zone is Devialet connected via USB. Roon still recognizes Devialet via Devialet Air but that doesn’t network with other zones.
The missing zone was called Living Room and if I remember correctly that was set up by the Antipodes DX appearing as Roon Ready device in Settings/Audio. Now the DX does not come up in Settings/Audio, although it does show as Core in Settings/General.

In Settings/Roon Ready on the DX is the Audio Device = USB DAC? And in Apps/Audio App Switcher does Roon Ready show as Active?

This may mean that the DX->Devialet USB connection is not recognised… Go to Settings/System Settings/Custom DAC, scroll to the bottom of the list and check that the Lumin shows as ‘USB Audio Class Digital alsa audio output interface `hw:1,0’, similar to:

Hi Tony, I think you’re onto something. Here is a screenshot. 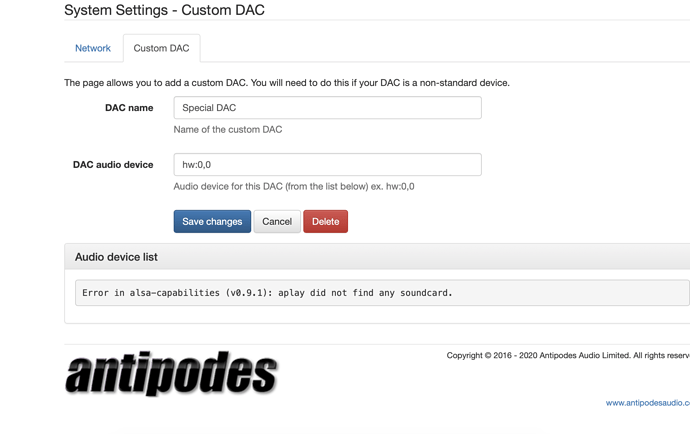 If that is an Antipodes DX it needs to have a s/w fix. Please email support@antipodes.audio.

It is a DX. I’ll contact support. Thank you for the help.