Zone Visibility in ARC and Transferring Queue between Roon Remotes/ARC

It’s not as simple as it seems either. Say I’m listening to music in kitchen and my wife is listening in the living room. If we’re about to head out and I walk around pausing the different zones (or selecting “Pause All Zones”), we probably want to make both queues available in ARC once we get in the car.

Not an impossible problem, but lots of cases to consider.

Sign me up for this, as in i want Roon ARC to register history, play queue and such to the Core. That should allow transfer of play queue’s between apps also.
Or rather, i’d like a single app for both in- and out of my home network…

This morning I started playback on ARC on an iPhone 13 Pro and left it outside playing. Looking at Roon from a desktop client there’s no indication anywhere that there’s an ARC instance active in the mix.

Should it not appear in Settings/ About and should I not be able to pause playback to it as a zone and transfer to/from it to other Roon endpoints? Think of the scenario arriving back home from a commute or a road trip, really enjoying the music, stepping inside and wanting to transfer playback to the stereo, or enjoying a good session at home and having to hit the road…

No it’s intended, certainly for release one, as a standalone app.

Hopefully this is addressed, it’d be a shame to not be able to seamlessly move from listening wherever you are to wherever you’re going.

It came up in June:

Is there a reason a device playing ARC doesn’t show anywhere as a Zone?

It’s not really part of the Zones and it’s not a RAAT endpoint, but more a remote control that can work outside the house and play music
At this point it can’t be used to send Music to other zones etc. Hopefully that will change in the future and we can arrive home and swipe the music to another zone.
Exciting times after a long wait

Thanks @Michael_Harris . And I assumed what you pointed out; however I’d like to know what (and who) is connecting to my Core at some point. If Remote shows as “This Phone”, then I think ARC should too. Cheers.
EDIT: If Roon wants to make sure all subscribers that use “port forwarding” for the first time feel secure, this would help considerably.

Actually that’s quite a nice idea.
I had not thought about that, but I had a couple of core crashes after being quite remote. I was wondering if Roon was still thinking that the phone was connected, so it would be nice to see that

I’ve merged these posts into the initial feature suggestion thread on this issue so the product team can track it.

Please refer to @mike’s post above for the current status of this feature: Zone Visibility in ARC and Transferring Queue between Roon Remotes/ARC - #2

Ok, I am daft frequently so fair warning.

I can not get my android device to connect to my roon server w/ARC capabilities using the standard Roon app. I needed to install the ARC specific version and then there was music on my phone, which was my only need that day.

I generally control my system inside the home via a computer(standard non arc win application), It’s good to be a geek, anyhow . . . I went to give someone my phone so they could skip/select their playlist. I mean it is a remote . . .

I see no way to control any endpoint but that phone. I clicked around but I apparently fail at “native UI usage” as one of my kids had told me.

Would someone please make liberal application of the clue by four and point me in the right direction?

ARC does not have the capability of selecting different zones; the standard Roon Remote for Android (and iOS) does.

I can not get my Android device to connect to my Roon server w/ARC capabilities using the standard Roon app.

That should work, providing the Android device is connected to the same LAN that the Roon Core is running on, once you switch to (mobile data / different LAN the Roon Remote App will no longer connect.

The ARC app, can of course connect to the Roon Core but at this time it is limited to only controlling the audio on the device it is running on.

I hope you don’t mind, I’ve migrated your posts over to a thread in our #arc-testing:arc-feature-suggestions subcategory. I think the above posts will provide some clarity as to the differences in capability between ARC and Roon Remote on Android, specifically with regards to controlling Roon endpoints within and outside the home.

Thank you for putting this is its right place.

Here is where I have the problem.

other details. The remote is on the same network and subnet. using the old Roon app/server (yes I kept a second around because beta doesn’t mean go without music if a bug is found) works as expected on android.

I think you are saying that your Core is running build 33. And, your ARC app build 33 CAN connect to it; however, being only for local device use cannot control any other zones. Which is expected behavior. 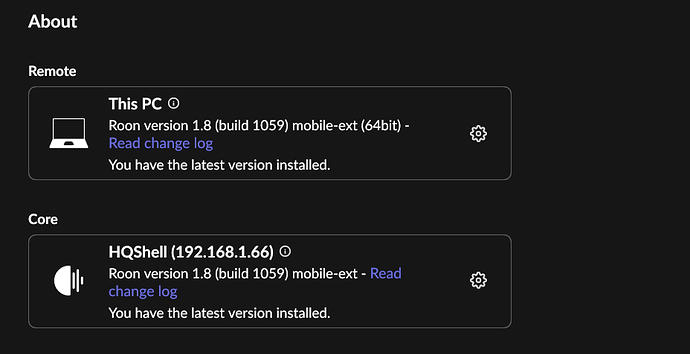 If this is expected behavior. Thank you, I’m looking forward to feature completion. If not. Hi. apologies but you may want to know.

From here I can play on my phone only. I can not select or control any of the zones the setup in the top image allows.

This is also correct. ARC is not a replacement for the normal Roon Remote it is a different app made to only play to the mobile device running ARC. It cannot be used to control other zones of playback because that is not its function. It’s purpose is to be used out of the house for listening on that device.

That is confusing, I take the bottom image as referring to the app running on the Android device more so than the Core build. That is something support should comment on as it is confusing.

However, you said that you had a mobile device running Roon (the app) build number? and that this app cannot connect to your core. That should not happen as you are supposed to use and keep using the normal Roon app with the ARC enabled core.