The other day my credit card expired in the middle of the month, no pending payment at that moment. I had a good 20-30 albums that were bought (not subscribed) on Apple Music. I got a notification from apple that my credit card expired (ok, so what) and I lost access to streaming side of Apple Music (which is normal, ok with that) but what’s next is the reason I will support Roon and nucleus for as long as they continue be music lover focused.

The next I tried to play my own! purchased music but Apple would not allow, strange I said.

I tried all the movies that I (think) own on Apple TV, nope Apple won’t let me watch my own movies which I already paid long (some 10 years ago) ago.

In comparison I bought music from qobuz, blue coast etc saved on ssd in my nucleus, it plays even if I don’t have a penny in my pocket every time.

Apple Music family share will live on as a convenience (I don’t trust ) on my i devices to play in the car or on holiday etc but if none other streaming survives I will buy cd, or digital and save to my nucleus and play on Roon

I don’t doubt the source of numbers but I think you should use real world experience, ie try finding tracks available on the services rather than quote the numbers.

Based on my experience, these numbers does not reflect the relative sizes ie I feel like there is a 75% chance a track is available on Apple that is also available on Tidal/Qobuz, while a track I find on Tidal/Qobuz the Chance I can find it on Apple is more like 99.99%.

I suspect one reason why Qobuz and Tidal has quite high track count that doesn’t echo my experience is that very often I find 2-3 versions of the same album on Qobuz/Tidal that aren’t necessily all that different. E.g. I find 27 versions of frozen 2 on Qobuz from Roon for some of which I am not sure where the differences are.

Again your mileage may very especially for classical and jazz where Qobuz might have an edge, also don’t forget you have 100,000s of old tracks that you have on Roon that maybe quite exotic on stream.

Overall, Roon has its niche audience to charge their niche price to. There is nothing they should do about Apple Music, instead they should focus on making satisfied customers like you more satisfied.

It’s already included into the new beta. Won’t support 192 on iOS devices yet, though. Fully 192 is only supported on macOS.

But I bet you are not theming all genres equally, but concentrating on probably no more than four or five genres of which at least one or two are ones Qobuz and Tidal are not particularly strong in, which would seriously screw the results. And, my local library has zero to do with it as all of it has zero tracks from Qobuz or Tidal I never search either for what I already have, just for new stuff. And if I find something I like, I try to find somewhere I can download it. But my search results do not mean diddly squat either, as I do not search all genres equally…

Yes it is likely everyone will have different result depending on Genres.

Why are you saying that 192 kHz won’t be supported on iOS/iPadOS? Do you get an alert or something else?

Why are you saying that 192 kHz won’t be supported on iOS/iPadOS?

There is no way to get higher quality out of your device. Airplay does not support 192 yet.

I know about the AirPlay limits.

If you connect the iOS/iPadOS device to a DAC (via Lightning-USB adapter) you should get hi-res output.

Another question: is it possible to spot hi-res tracks? I see the Apple Digital Master logo. Is the music over 44.1 kHz somehow marked?

Until Apple does something like Spotify Connect , I won’t be subscribing. I have long distances from my equipment to speakers (different rooms) and am not doing Airplay because of it . Easily 300-400 feet in spots.

Not sure about the DAC trough lightning. The dragonfly DAC does 96 but no 192 via Qobuz via lightning via USB adapter. Haven’t seen 192 from iOS yet.

There is no way to get higher quality out of your device. Airplay does not support 192 yet.

I can play a 24/192 local file copied to my iPhone, via the Music app to my Chord Mojo or Hugo 2 just fine. I see no reason that shouldn’t work with streaming too.

And you’re sending it to Mojo or Chord via Airplay or via wired connection? And you know the Mojo or Hugo is delivering 192?

Wired. And, yes, the 192 color indicator is lit. You’ve been able to do this for a couple of years actually.

And FWIW, I can of course also stream 24/192 via Qobuz without issue.

Yes, you’right. From iPad via USB to Dac - my streamer indicates 192 kHz PCM (streaming from Qobuz).

It depends upon the controller being used. Roon is not a native app on iOS, so the UI does not adhere to standards for the operating system - none of the standard swipe gestures work. And because the Roon UI is optimized for desktop (mouse and pointer), the targets are too small for touch devices. This can be quite irritating for those who use iOS devices as their primary controllers. 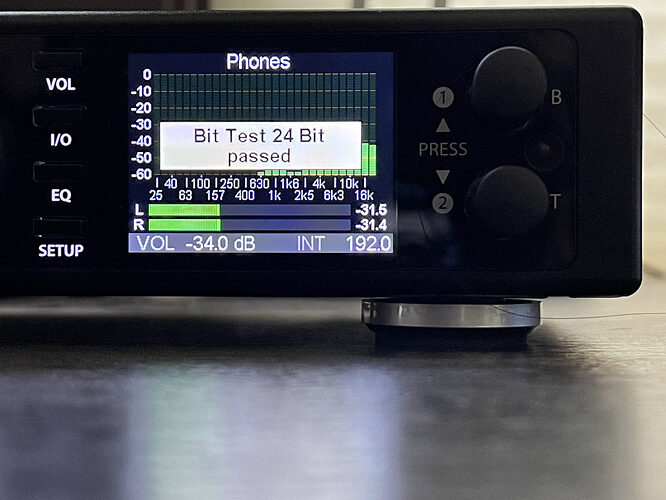 I knew that, but reading your post I thought you were saying it was not wired - thanks!