Are we getting a M1 ROCK version that will run on a Mac mini?

Why would it be a waste ? I’m currently running the Roon on a M1 Mac Mini and upsampling to DSD512 and pcm 768khz. Works fine for only one zone. But I imagine for 2 zones it might be already a bit much.

Processing speed goes down to 3.5x

are we getting a M1 ROCK version that will run on a Mac mini?

If so, that would come with Roon OS 2.0 which is something completely different.

offer some of the upsampling filters that HQ player has

You mean have Roon spend time creating those filters, or, do you mean license them from HQPlayer?

Licensing the filters would be a option

At a additional fee maybe?

You’re probably in better shape than you think.

The 3.5x is now much overcapacity Roon has for processing that endpoint. Most processing runs on a single core, with the exception of the DSD upsamping that can run on two.

So with 8 cores you should be able to run 4 zones with that type of load.

Just assume for the money better to get an intel nuc that just runs roon rock. If you do setup roon rock you can still use HQPlayer, but it needs to be installed on a separate machine. That’s the one you’d want with all the power to run the power hungry filters. And to complete the picture, a separate endpoint running NAA.

I had that setup at one point and found it a pain if something went wrong since too many parts in the chain to figure out the issue. Was nice when it worked and sound quality amazing. 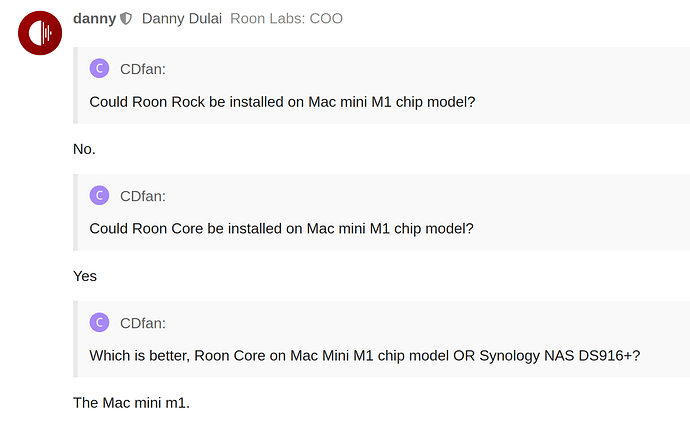 Is this topic for real? Lol. Why would you waste money on an m1 Mac for ROCK when you can just buy an off the shelf proper official rock device for basically the same price directly from the roon store.

What a confusing request.

This is not not at all a crazy question.

which works perfectly well and is fast

I’m running a Mac Mini M1 with both HQPlayer and Roon with one NAA with ASIO for DAC-60 DSD256 in an Accuphase and also a Roon endpoint Ifi Zen Streamer with a ifi Neo DSD256.

I’m able to use most of demanding filters at DSD256 like poly-syncs family and 7ECv2. Can do also DSD512 with DSDv2. 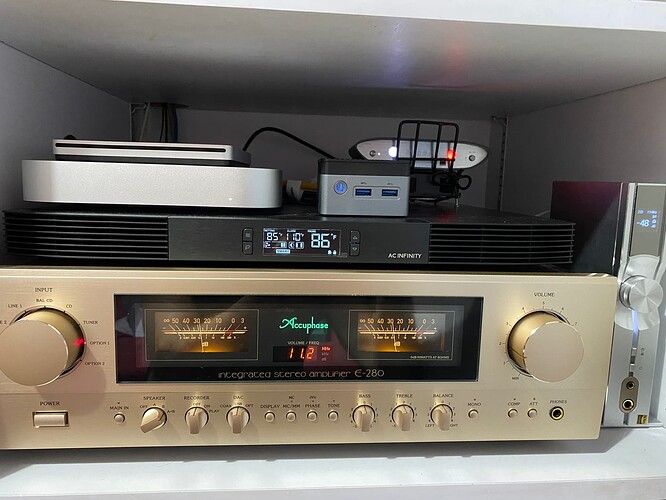 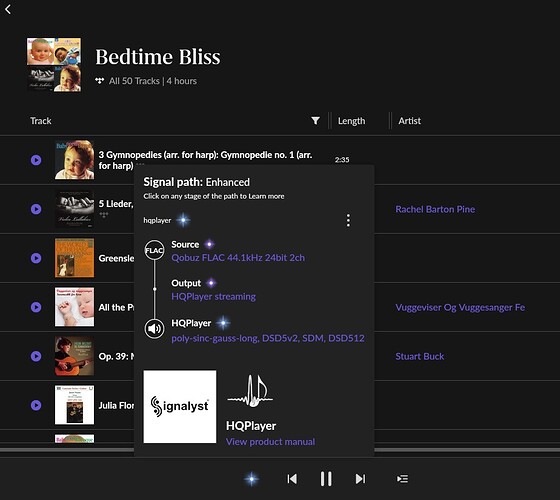 I run an M1 Mac mini with HQPlayer as well. It’s great.

For some people it would also be great if they could run Rock on an M1 Mac mini . Though I never would because of Rock’s lack of flexibility.

to enrich your digital library

. Plus use as printer

Cheapest nucleus is 1649 euros. For a i3 cpu and 4gb ram. For that money I get 2 Mac mini with enough money leftover to buy a external SSD or something else.

Cheapest nucleus is 1649 euros. For a i3 cpu and 4gb ram. For that money I get 2 Mac mini with enough money leftover to buy a external SSD or something else.

Nothing is stopping anyone from buying a Mac mini (or two).

All in all, I don’t think that anyone running a core on Mac is negatively affected by Roon in any way. The same can be set for people running ROCK on a NUC, or Roon on Windows for that matter.

That’s what I said…

I’m not that technical but I was able to follow the step by step instructions to setup roon rock within 30 min. Once setup it runs headless. You never have to hook a monitor back up to it after initial setup. Think whole kit cost me around $400. And I have it directly connected to the router in a closet so don’t hear it either even though quiet most of the time.

There is no support yet for the new generation of Nucs

For your needs you can pick up an old one for cheap price. I’d don’t think roon is going to integrate HQPlayer filters into their own program, so doesn’t need to be that powerful. Just get some extra ram.

Mac Mini M1 has a lot more compute (for upsampling, for instance) than a supported NUC, and its fan is barely audible, as opposed to the NUC. IMO, it’s the best bang-for-buck audio server available, with a couple of caveats: 1) you need to manage macOS updates; 2) setting up headless operation is tricky but possible.

Setting up an M1 Mac mini for headless operation is simple once you know how to do it.

When Roon releases a native .NET version of the Roon Core/Server for M1 Macs, the memory management issues some people see today will be gone and performance will be even better than it is now.