Is there a way to group the same artist together with different monikers. For example, many of Paul McCartney’s albums under “Wings” do not show up under Paul McCartney and need to be searched separately.

I’d suggest editing in Paul McCartney as a Performer.

Sometimes you can get clickable/non-clickable name distinctions. Mike gave an explanation here of how that occurs.

Thanks for the info but the editing didn’t work. With all the things Roon can do you would think I would be able to have the “Venus and Mars” album appear under Paul McCartney… pretty frustrating.

Thanks for the info but the editing didn’t work. With all the things Roon can do you would think I would be able to have the “Venus and Mars” album appear under Paul McCartney… pretty frustrating.

Agreed. I think I see the issue here – although AllMusic is crediting Paul McCartney as a primary artist on this album, we seem to be missing it in our entry for the album.

Since he’s only credited as a composer on this album, Roon doesn’t consider this to be an album he performed on – if the page showed every album on which the artist’s compositions were performed, people like Paul McCartney and Bob Dylan would have unusable artist pages (as opposed to their composer detail pages).

@brian_pedersen – can you confirm that all the albums you’re expecting to see on Paul McCartney’s artist page are in a similar state, meaning that he appears on the album only as a composer when you click Credits, like this: 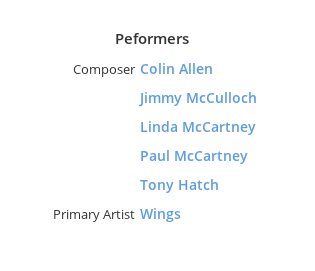 If so, let me know the names of a few of the albums (or paste me some AllMusic links) and then I can look into this further and open up a bug report internally.

Thanks for bringing this to our attention! Moving this to the metadata category.

Mike, yes that is what I’m seeing. He is listed as composer only. The other albums in a similar state, in addition to Venus and Mars, are Wild Life and At the Speed Of Sound.

Thanks for looking into it!

I’m glad you guys are working on this, particularly with regard to Wings. The McCartney issue is particularly galling because although you can edit the album to add McCartney as the Performer, since Roon can’t parce the user modified performer field for First/Last name, the albums now show up alphabetized under p for Paul. I suppose that’s better than under w for Wings, but it would be nice to have all McCartney in one place. And if you’re going to fix Wings, perhaps you could also fix Electric Arguments by The Fireman (a McCartney side project) as well.