ROONTAG (NAMEOFTAG)
Although not limited to Classical, the ability to specify a file tag for Albums or Tracks which would then add said Albums or Tracks into a Roon Tag would assist a lot of Classical curators to import their existing folder or file structures into Roon. ROONRADIOBAN has paved the way.

All of yours were good, this one particularly so, @andybob. Very powerful.

At the moment multi-part WORK titles revert to generic roon composition titles. There are many scenarios where the works should be grouped but distinguishing file WORK titles should be allowed. For example it would be much less confusing if a Bach violin partita transcribed for guitar has that fact reflected in the WORK title.

Instead of bundling composers, arrangers, orchestrators, transcribers, lyricists under a single “composer” category on the main album page (and various other pages), the various contributions should be distinguished by role. Personally I am not a fan of the credits pages and would just like the option of more detail for an at a glance 360 degree view on the primary pages.

Some way of distinguishing different editions of scores. E.g. Nowak vs. Hass for the Bruckner symphonies or Breitkopf & Härtel vs. Bärenreiter-Verlag (Kassel) for Beethoven.

At the moment on the main album page, album artists at the top of the page are listed alphabetically by roon. In my file tags I have them listed “soloist; ensemble; conductor”. It would be better to retain this order than re-ordering alphabetically. This convention is useful if you are unfamiliar with the album artists, It also adds uniformity to the pages rather than the artists constantly jumping around as you scroll through the pages. Famous conductors for example will appear before or after the orchestra depending on alphabetical order of the orchestras they have been paired with.

Not especially a classical requirement but it it is very common to have markedly different genres on classical discs and boxes. For example, vocal and instrumental music on the same disc.

2 posts were split to a new topic: Search by Label

A much needed initiative. Thank you!

2 posts were split to a new topic: BBC through Roon

4 posts were split to a new topic: Sorting Bookmarks

A post was merged into an existing topic: BBC through Roon

Edited in a paragraph about Work grouping in Radio and Playlists.

Another thing which bothers me regularly and of which I got reminded by this thread:

The WORKID tag should also be able to clamp parts of a performance together on an album. See also Not consecutively appearing multi-part works and performance count

Yes, all my collection is filed as Artist = Composer. Are you trying to force a different filing structure?

Nope, I just add the composer as primary artist (within Roon, not in tags) to the album. I do this so that on the roon artistpage of a composer the album is listed.

I am really glad you are doing this. I don’t fully understand all of what you are describing but I would like to share some requests from a “user perspective.” I apologize if I am restating some things you have described.

(1) Multi-channel and Stereo Recordings. I have a multi-channel DAC and a stereo DAC. I have become interested in comparing multichannel and stereo versions of the same recording. I have purchased some NativeDSD downloads in both formats and loaded them into my Roon library.

(3) Album labeling. I would also like to have the option of viewing entire albums as they were published (i.e., with all of the tracks) and viewing a particular piece (e.g., a 4 part symphony) without the other tracks on the album. This would be also very useful when I want to hear a particular symphony and would like to select among a number of conductors or orchestras/bands.

An alternative might be to have a composition listing, which would be for all of the parts of selected works my collection. For instance, I could select “Bruckner’s Symphony No. 7” and see all of my recordings of that symphony (including recordings with only some of the parts – although some notation about this would be helpful), without the other pieces that might have appeared on the same album.

Thanks again for doing this. It looks like you have put a lot of effort into this. I am very grateful.

There are many ways to skin the Roon cat …

I am sure you’ve found this route but if not …

The Composition view allows a filter on Composer, enter Bruckner , now enter Symphony in the composition filter and you get a list ( it supports part matches eg Symp will do)

Select, even bookmark it
Tap to show all recordings

It’s a pain I agree but specific composer group of works the only issue is when Roon doesn’t ID the album , you often get missed recordings which in a big library you may not even notice !

Bookmark is a good function, I have started with big boys , Beethoven etc

These features would be better if built in. The baggy for me is the Composer view should show albums not works, the Composition view does that already

Ps when you start creating Bookmarks you’ll see the bookmark browser is missing , it’s just a drop down which with lots of bookmarks is wanting

I suspect that you have got the “Show Hidden Tracks an Albums” (under Settings/General) turned off (this is the default). This will only show what you choose to be the Primary version of duplicate albums in the Album Browser. You could turn in on; but you could also use the Focus/Inspector/Duplicate feature to directly show all duplicates in your library. And if you have the "Show album format on browser turned on (on the same Settings/General page) turned on, you will see the formats clearly marked; like so: 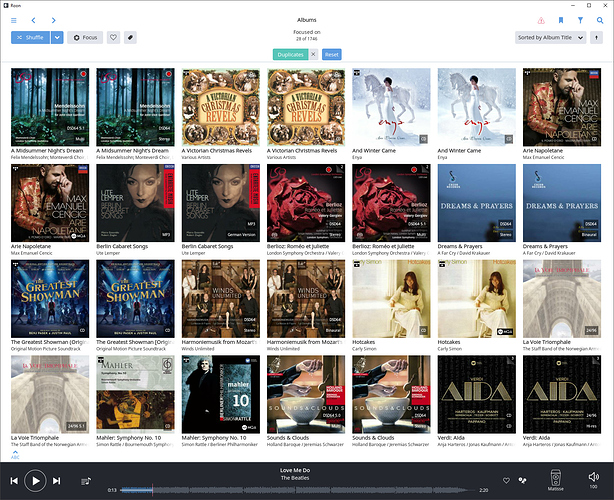 You’ll perhaps also notice that some duplicate albums are marked Binaural or Stereo - that’s been done using the Version tag in Roon.

You can do this with Focus. Go to your Album view, hit Focus, scroll to the far right and there’s a “format” option in which you can select number of channels.

Whether limited to Classical only or not, “Sort by Composer” is a natural filter for Classical.

I want a sort by Composer more than any other feature.

Most of my albums are opera and classical. If I want to browse to choose an opera to listen to (for example) I will want to sort by Composer so all Puccini or Verdi or Wagner or Rossini operas will sort together and then by title. Same with orchestral works. I would want all Beethoven together, all Mozart together and so on.

I also might want to sort by Conductor. Suppose I want to listen to everything conducted by Herbert von Karajan. Or Leonard Bernstein.

Is that sort by or a better search so you can find Karajan for example?