Ethernet or Fiberoptic to MSB DAC

Convolution vs Parametric
Does the engine work the same if one imports an REW file into convolution vs typing in the filters in Parametric? Under Convolution it seems to take longer to play the song and doesn’t work for DSD (no DSD sampling file out of REW) whereas with Parametric it seems to work faster and with DSD.

Any DSP has to be applied in PCM , same as parametric. Roon will always convert source to PCM then apply DSP then back to DSD regardless of PEQ or Convolution. . Convolution is a far more advanced way of applying DSP and as a result can apply far more complex corrections and filters compared to PEQ but comes at a cost of needing far more horsepower.

Thank you that is very helpful. In terms of information however, what else would convolution files have other than frequency, Q and attenuation/amplification per filter? My convolution files seem to show 15-16 filters which I then copy in parametric.

reverberant field information, have a look here for additional capabilities:

The idea behind HAF came from unsatisfying results from traditional loudspeaker/room equalization methods to get decent sound from a full range loudspeaker. The explanation lies in the loudspeaker directivity issues and inability of classic...

Any DSP has to be applied in PCM , same as parametric. Roon will always convert source to PCM then apply DSP then back to DSD regardless of PEQ or Convolution

Hmmm…are you sure? I need to connect a DSD DAC again, but I’m fairly certain that the wizards at Roon Labs came up with a way to apply convolution and other sorts of DSP without a round-trip through PCM. I’ll re-test and get back to you.

Update: Yes. No round-trip through PCM: 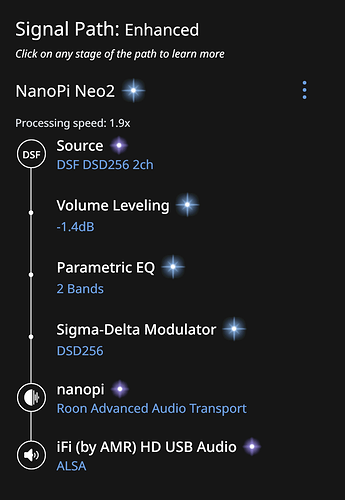 In the meantime, have a look at this thread…

Unlike with PCM, processing 1-bit DSD signals in their original form is not practical because 1-bit signals do not have enough dynamic range to perform common operations like volume adjustment, eq, mixing, or convolution directly on the 1-bit representation. So when DSD IS processed, the input to the processing chain is a 1-bit DSD signal, but the output must have more dynamic range. In Roon’s case, we perform processing with 64-bits of precision, so whenever you process DSD, you end up with so…

I assumed it was pcm due to the bit depth upsampling and you can’t do it on the native format itself. Cant say i have looked into it in much detail. Better than I thought thanks for the correction.

My completely subjective and likely to be completely wrong opinion is that convolution can have a more dramatic effect without as many artifacts . To do the same with a parametric EQ will cause more audible artifacts.

As I say I do not know what I am talking about and I am likely to be shot down. But this is how it sounds to me.

To do the same with a parametric EQ will cause more audible artifacts.

I think it’s easier to end up with a set of filters that produces audible clipping using PEQ than convolution…but it’s certainly possible to do this with either.

I was thinking more “pre ringing / post ringing” effects but as I say I don’t really know what I am taking about so if there are no difference between the two then just ignore me.

FIR takes more computing power than IIR, but you can fold many DSP functions into a single impulse response file and convolve it as a single operation, preserving phase.

The above is a bit simplistic, because convolution is a mathematical operation, whereas FIR and IIR are filter designs. In theory you could use a convolution function to implement either an FIR or an IIR filter, but FIR is more usual because of the advantages set out below.

Here’s a bit more about them all:

An FIR filter has a number of useful properties which sometimes make it preferable to an infinite impulse response (IIR) filter. FIR filters:

The main disadvantage of FIR filters is that considerably more computation power in a general purpose processor is required compared to an IIR filter with similar sharpness or selectivity, especially when low frequency (relative to the sample rate) cutoffs are needed. However, many digital signal processors provide specialized hardware features to make FIR filters approximately as efficient as IIR for many applications.
Source

The main advantage digital IIR filters have over FIR filters is their efficiency in implementation, in order to meet a specification in terms of passband, stopband, ripple, and/or roll-off. Such a set of specifications can be accomplished with a lower order ( Q in the above formulae) IIR filter than would be required for an FIR filter meeting the same requirements. If implemented in a signal processor, this implies a correspondingly fewer number of calculations per time step; the computational savings is often of a rather large factor.

On the other hand, FIR filters can be easier to design, for instance, to match a particular frequency response requirement. This is particularly true when the requirement is not one of the usual cases (high-pass, low-pass, notch, etc.) which have been studied and optimized for analog filters. Also FIR filters can be easily made to be linear phase (constant group delay vs frequency)—a property that is not easily met using IIR filters and then only as an approximation (for instance with the Bessel filter). Another issue regarding digital IIR filters is the potential for limit cycle behavior when idle, due to the feedback system in conjunction with quantization.
Source

In mathematics (in particular, functional analysis) convolution is a mathematical operation on two functions (f and g) that produces a third function expressing how the shape of one is modified by the other. The term convolution refers to both the result function and to the process of computing it. It is defined as the integral of the product of the two functions after one is reversed and shifted.
Source

They will have the same effect if you export a filter impulse response from REW and use it as convolution in Roon or directly key the filters in in PEQ. Convolution will use a lot more processing power though as it is capable of phase filters etc (which your REW exported files do not contain) and as you have mentioned Roon will skip all your DSD files. I use convolution only when I phase correct EQ filters in Rephase after REW. Then they make a difference worth the time delay.