Hello Andrew and thank you very much for offering your help and support. I am very seriously considering the dCS network bridge because, at least on paper, it sounds like a phenomenal product.

Let me tell you a little bit about my setup: I have a pair of Devialet export Pro 1000 Mono blocks that have been upgraded to the Core Infinity module and I am using a Synology DS 918+ NAS with 8 GB RAM. It has a 1 TB SSD with roon server and database installed on it and another 2TB SSD with music files on it. The speakers are Vienna Acoustics the Music floor standers and the sound quality is excellent. Right now, the end point for roon is the Devialet. Clearly the endpoint is going to be the dCS network bridge if I install it.

I do not have the option to listen to the dCS network bridge before buying because in my country there is no dealer. I will have import it and if I notice no improvement in sound quality I am pretty much stuck with it. That is $4200 spent needlessly if I notice no improvement. I note this is a hard question for you, would you still recommend the network bridge? Thank you very much.

I don’t understand what use you have for the network bridge at all. You’re using the Devialet itself as an endpoint so I cannot imagine a cleaner connection in that respect.

Is it because you’re wondering if RAAT to bridge to SPDIF in Devialet would be better than directly to the Devialet over RAAT? I very much doubt that.

The only other reason might be the imminent support of MQA first unfold by the bridge, but Roon will also support that soon.

Why would you consider this option?

But I realize that’s just an opinion

I'm from dCS and I'm here to help

It is possible that inputs over SPDIF sound better than Devialet AIR and/or Roon’s implementation of Devialet AIR. I would suggest to ask in Devialet forums about this.

Right now, the end point for roon is the Devialet. Clearly the endpoint is going to be the dCS network bridge if I install it.

Is it because you’re wondering if RAAT to bridge to SPDIF in Devialet would be better than directly to the Devialet over RAAT? I very much doubt that.

As far as I know, even with the new Core Infinity module Roon is still speaking to the Devialet via Devialet’s AIR protocol (not RAAT). This may change in the future, I don’t know.

It is possible that inputs over SPDIF sound better than Devialet AIR and/or Roon’s implementation of Devialet AIR. I would suggest to ask in Devialet forums about this.

When I dealt with the product line the consensus was that the AES interface provided the best sound quality. I’m not sure if this carries forward into the new Core Infinity module or not.

Unfortunately, I can’t give you an answer based in anything other than conjecture on which option (Network Bridge vs. AIR) will sound better. What I can say is that the Bridge has been adopted by a large number of non-dCS DAC users and their feedback in terms of sonic performance has been extremely positive.

Thank you very kindly, but input from both of you have been very helpful. It has made me more well informed and knowledgeable

I have the 440 Expert Pro monos with the Core Infinity board (the latest hardware and firmware) and am using the Bridge with a fanless NUC with linear power supply. The Bridge is AES/XLR out to the Devialet. Sounds fantastic. Ethernet into the NUC then “bridged” into the Bridge using a AmazonBasics USB 3.0 to 10/100/1000 Gigabit Ethernet Adapter.
To our ears the Bridge is more subtle and dynamic when compared to ROON Air directly into the Dev but definitely the “elusive 5%” as the Air directly into the Dev. sounds great.

Good to know, certainly invaluable input before I spend over four grand on a network bridge/streamer

Warren thanks for the input. Could I request you to send me a screen shot from roon app showing the pathway from source to dCs network bridge to Devialet? Thanks! It looks like this: -

Here ya go! …btw, have the same album…Lionel, great one ! 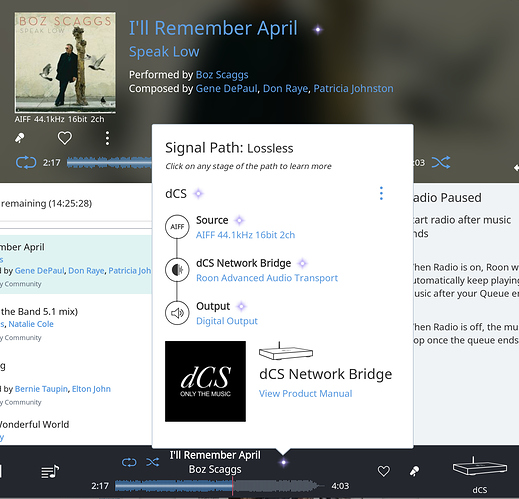 Also I would imagine that you’re making use of Apple airplay, Spotify and Tidal through dCS Network Bridge rather than Devialet air? Right?

Spotify and TIDAL working great on dCS units. Airplay has a few issues which I understand will get solved in due course. Just a warning not to bank on Airplay right now. If you really count on Airplay, one way to make it work flawlessly is to use an Airport Express optical out into the optical in of your Devialet.

I used to do it with Airport express and an optical cable in the past when I had D800s but when I upgraded to expert pro 1000 I use it through AIR. Hasn’t given me a problem so far but I haven’t made an A/B comparison of the sound quality

Then I suggest you keep using Devialet AIR rather than Airplay. Airplay is only 16/44 (maybe 16/48) anyway while AIR can be high res.

I only use Airplay when doing multiroom with other Airplay speakers.