After my experience of Roon’s reluctance to support Homepod Stereo Pairing (waiting for over 3 years), I’m wondering is there a similar issue with a pair of Devialet Phantom Gold?

Any help will be great.

Yes, and this thread contains even more recent information: https://community.roonlabs.com/t/the-phantom-for-the-rest-of-us-phantom-reactor
It’s worth noting that Devialet’s Expert Pro amplifiers have had RAAT for quite some time now so it’s not for lack of implementation experience that Phantoms don’t have RAAT…

Given that Apple does not even support stereo pairing Homepods on macOS (outside of Apple Music), I’m not sure what Roon could do here (and even if macOS was somehow tackled, there’s still Linux and Windows).

I owned a pair of Phantom Gold 2 years ago. I sold them after the disappointing DOS2 was released – and a year on, there’s been barely any progress. As always – buy gear for the features it actually has, not for what it may support in an uncertain future, where features are gladly promised but rarely delivered.

I’m pretty sure Apple has supported stereo pairing after their first update almost 3 years ago, I’ve been using mine with Tidal (and pretty much all other applications via Airplay2). We have 2 pairs of Homepods and often have to use Airplay2 instead of Roon. Roon has been a compromised setting of grouping them as a pair and using a left/right setting to pair them and pretty much never sync with the other speakers in the house when we do multiroom option. Hence a little cautious about Devialet.

Roon supports paired Phantoms through AirPlay, nor RAAT though. That’s why the Phantoms are Roon tested and not Roon ready. Pairing of Phantoms can be done for both DOS1 and DOS2 firmware. DOS1 needs a Dialog, DOS2 not anymore. But be aware that you need newer Phantoms or Dialog that have AirPlay enabled. As of yet no RAAT for Phantoms, I’m still hoping it will come one day. As alternative I’m using RPi’s with Roon bridge and RAAT and optical connection to the Phantoms, one per zone.

That’s only true for iOS/iPadOS — macOS still cannot see the stereo pair, but sees individual Homepods instead. The exception being the Apple Music app that can play to the stereo pair via Airplay2. (There’s a bit of a clumsy workaround involving the MidiApp using Apple Music for audio output, but that’s it).

For Roon to support the HomePods as a stereo pair, it would need access to the full Airplay2 stack (which is only licensed to hardware manufacturers) and even if they did somehow manage to work out the licensing issues – they would somehow need to make it work across macOS / Windows and Linux.

It would help (at least for those running a core on macOS) if Apple would support the stereo pair at OS level — but it doesn’t look like they can be bothered.

Roon supports paired Phantoms through AirPlay, nor RAAT though. That’s why the Phantoms are Roon tested and not Roon ready.

Not anymore! They finally released their firmware that is Roon Ready.

This is just great! 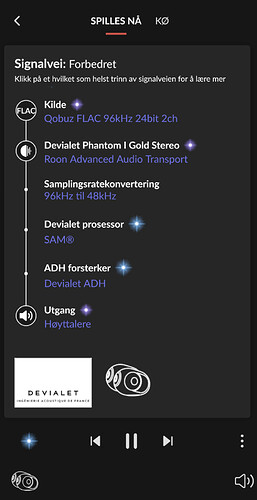 I just completed both updates and confirm my Golds are sounding even more spectacular now that they are Roon ready! Roon 1.8 is fantastic…congrats to the Roon Team!

It’ll be great if you could help me out with your Devialet Phantom set up. Having a pair, could I use the optical input on one speaker for the home theatre (projector) and the optical on the other speaker for my SACD player (which does MQA).

And on another note, anyone compared to the sonic difference between the Phantom Gold vs Phantom 1? Currently there are deals for the Gold.

Yes and yes.
I haven’t compared the Gold and the I. I’m a happy camper with two Gold and three Silver in a 5.0 setup. Sounds really good in stereo and is great fun as HT.

Thanks for the feedback. I’ve been reading the comments via Devialetchat … is it true with all the bugs that people are commenting about?

If my SACD player unfolds MQA 192 files and sent to the Phantom via optical, it will be converted to 16/48?

Some are experiencing a lot of problems with DOS2, some aren’t. I’m fortunate to be in the last group. 24/192 will be downsampled to 24/48 if the optical input can handle 24/192. A lot of people have trouble with 24/192 on the optical inputs, Devialet specifications states maximum 24/96 on those inputs.

From measurements I recently made on a Silver Phantom with DOS1 and DOS2 and on Gold Phantoms with DOS1 both downsample to 24/48k. The only way I could play a 25kHz sine signal 24/192k sampled and record with a UMIK2 an analog response from the Phantoms was when using optical direct mode. All other ways Spark, UPNP, optical reproduced a 22kHz sine signal but not a 25kHz signal. From this I conclude that you get basically the same in DOS1 and DOS2. Also the frequency response was quite identical on the Silver Phantom with DOS1 and DOS2. In optical direct mode it is a bit extended. I should find some time this weekend to document it with graphs and will report on Devialetchat. Maybe worth mentioning here is that it looks like the frequency response of RAAT in DOS2 is very little more extended than using the optical input. I had a RPi4 HAT with Digi+ board to feed to the optical input of the Phantom.

I certainly had the characteristic problems many had with the DOS2 release enabling Roon Ready. However, the fixes Devialet put in place have made it a stable, reliable system. It just works the way you’d expect Roon Ready to work. I’m quite happy with my Silver Phantom now.
Much as I like the sound from the Phantom, it would be hard for me to believe one could appreciate audible differences among these sampling rates at its limits. My main system is way more evolved, and I frankly can’t distinguish meaningful differences in those high sampling rates on that system.
Boy, I’d hate to think its my ears. But I suppose you can’t rule that out.

I experience absolutely the same. I cannot hear these differences I measured. That’s why I measured them. It is sufficiently revealing how long the part of a sweep from 10Hz to 30kHz lasts that you cannot hear. In the lows after the ‘start chirp’ you see the woofers move like crazy without hearing them and in the highest highs you don’t hear anything after the sweep ‘drilled a whole in your brain’, then after seconds comes the ‘end chirp’.