Does ROON require a separate streamer?

Personally, I don’t believe that hooking your DAC directly to your core makes one iota of difference to the sound quality. There was a recent post by @Bill_Janssen linking to an objective evaluation by Archimago of the audible effect of noise from computers in the analogue domain. There was none…

I can’t seem to find the post, but maybe Bill could chime in with a link to it?

It costs you nothing, but time, to try both and decide on your own. Give each a week and then decide. I don’t have your exact set-up, in your room, in your region of the world (power grids matter) to know how the two setups will influence bass articulation / response, detail retrieval, transient response, sound stage width / height / depth, or imagining or if anything you listen to even has those qualities in the recording. or if any or all of those things matter to you.

Thanks for comments.
Yes true better ethernet than USB.I did a test just now.
With my present NUC Intel as Core ROCK going to LINN Streamer through ethernet and with my DAC connected to LINN sounds better clearly, than using directly NUC to the same DAC.
I wonder if instead of the cheap INTEL NUC I utilize a better hardware like a MAC the result would be better. I have not a clear idea if the streaming function is it made by ROON software or if the hardware affect strongly to the quality ?

My opinion… once you have it set-up over Ethernet you will not gain by replacing the Core. Exceptions to my opinion of course but I wouldn’t worry about it. Of course, I assume the NuC is in a different room to where you listen or at least fanless.

maybe Bill could chime in with a link to it?

Are you thinking of this? 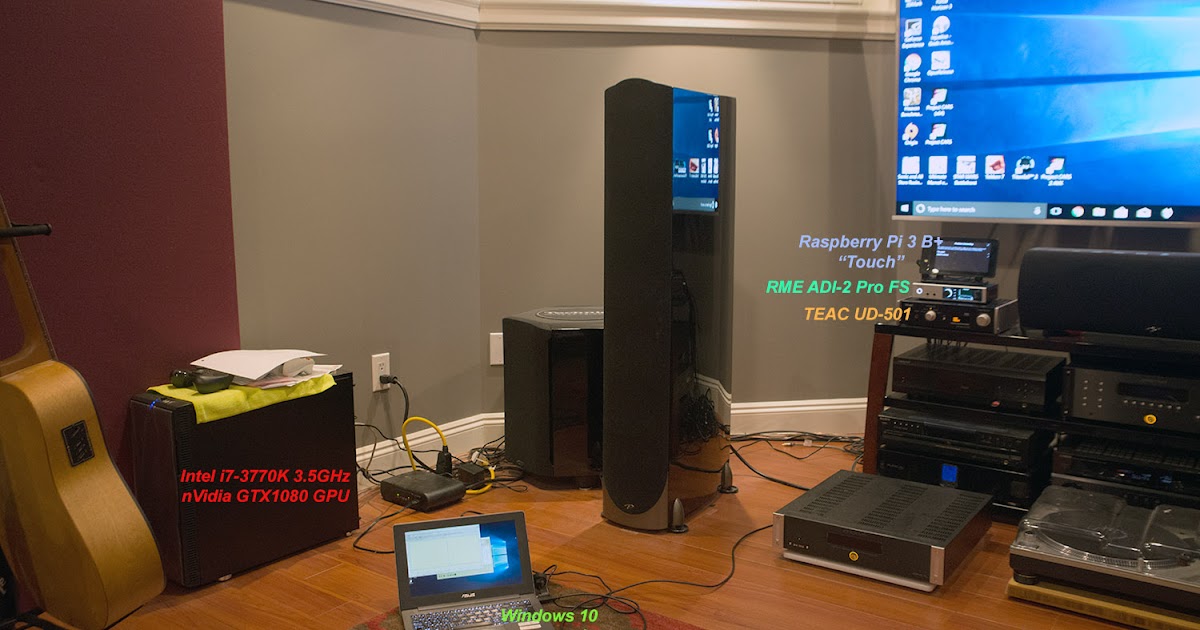 Thanks, Bill. That is indeed the one I was thinking of. I came across it the other day in one of your posts but couldn’t remember where.

That post from Archimago doesn’t show a difference of “none” at all, but shows that a computer under load can output more noise. Though the levels are low, that was only playing digital silence. We don’t have any conclusive measurements of the difference while playing music, and nor can we conclusively say that there is no difference. I wish we did.

I’ve tried running a Schiit Yggdrasil direct from my Roon core (a 2012 Mac Mini i7) and via a Singxer SU-1, and even with the double-isolated Unison USB, there was still an improvement from the Singxer. So, a separate streamer for me it is.

Re-read my post above. I said the audible effect of the noise was none, not that there was no difference in the absolute noise levels, though the differences are, at best, marginal…

“though the differences are, at best, marginal…”

It’s a problem with this whole discussion topic in general. Nobody knows what the truth is. There are too few people like Archimago repeating these actual measurements of things commonly treated as boogeymen in standard audio nervosa circles. Other folks repeat their “experience,” or what they “hear”, as if it means anything at all to someone else. Personally, I think that individual brains and minds and nervous systems are so variable and so subject to blizzards of other influences that I’d always like to see some mechanical measurements before I believe in some boogeyman. And the fact is, there are no measurements I know of which show appreciable noise. Only some that don’t.

The maximum noise levels he measured were around -117dB. Your ears would bleed before you could turn the volume up far enough to hear the noise.

I was merely putting the perspective of the measurement v.s. the what we hear discussion will go on for infinity, as Bill pointed out. Archimago does great work, highly respected.

The odds of a discussion, a process etc…to convince either “side” is pretty much nil.

Yes surley my server is in separate room. I am using 1Gigabit Ethernet with Cat 8 cables…
It is no a problem of noise of my ROCK in NUC Intel, since when I listen using ROON the local library the quality I get is marvelous, but doing the same with streaming it garbage.
I imagine is lack of capacity of the INTEL computer to manage the flow of data coming from Internet. All with same connection to my DAC.
I am not an electronic engineer and I was wondering if the streaming quality depends on the software of ROON or is conditioned by the hardware were ROON is installed.
The question is if with NUCLEUS this problem is solved.

Correction: You don’t believe that there is any possible audible effect.

However, no doubt, you believe there is an audible difference caused by a barely measureable change in noise at -117dB…

All I know is that when I plug my iMac directly into my DAC versus using an ultraRendu, the music does not sound as good. The difference is obvious and significant. The sound stage depth, height, and width is reduced and instrument and voice separation is less distinct.

I don’t need a measuring device to tell me there is a difference.

No, I’m not. The process of science would take an experience and try and explain the reason for it, using hypothesis and experiments. We don’t know for certain if the experiences myself and others have had are related to what Archimago measured, or not.

Science is not casually dismissing peoples’ experiences because of a single series of measurements performed with equipment that isn’t even designed for scientific measurement, of signals that aren’t even music, which is what we are listening to when we experiences differences.

The small signals Archimago edited were without a signal (or with digital silence). It is very possible that they are amplified well into the audible range with the presence of an audible signal.

Scientifically controlled blind A/B/X listening comparisons almost invariably show that the differences many people think they can hear in sighted listening tests are not reproducible in blind listening tests.

The question was asked whether Roon needs a separate streamer. Many people say yes, because of noise generated by the core computer being passed to the DAC over USB.

Measurements of the noise output say otherwise. Archimago’s article isn’t the only one - there are numerous comparisons over at Audio Science Review, especially when it comes to “USB cleaners”, “reclockers” etc.

I’m leaving this discussion here before it degenerates the same way all of these types of discussions do.

On a subjective note and to my ears, non scientific nor blind test I did a test side by side with my Roon Rock NUC in fanless case I built and a Node2i and a Auralic G1 and with a Benchmark AHB2/TT2/MS/Quad ESL2905 and the difference is not night and day but it is there with the G1 (usb to dac) using wifi (which is the reason I got it as to far from my router)
I could here slightly firmer and deeper bottom end and a sightly smoother top end compared to node 2i (toslink) and direct from Roon Rock via USB.
If it is worth +2K compared to direct from Roon I don not think so, I used Roon Rock direct for 2 years and would still be happy with it if it was not for the reason I wanted to stream via wifi and had some drop outs with node 2i, Node 2I or probably newer version is good as a streamer however the DAC is not top notch. So my personal bottom line is that it is probably not worth to upgrade and spend 2K extra unless you are very picky and have a system to match, I would rather spend the $$ on better Speakers/Headphones and DAC and last upgrade would be the streamer ( actually cables would be my last upgrade)…just my 2 cents

The Bluesound Node 2i doesn’t have a particularly great DAC implementation. ASR’s measurements found it barely capable of resolving Redbook 44.1/16.

I replaced mine with a RPi4B running Ropieee and a Topping DX7 Pro.