Roon had some logic that if you had been using it with that reduction in 1.2, 1.3 keeps it in place,

Whatever. Just change it if you don’t like it.

When I upsample to “Max PCM” on DSP engine, what is the PCM output value?

It depends on your endpoint/DAC and your settings, of course. You can see what it is by looking at your signal path.

It appears that Singxer SU-1 does not support anything above 384 kHz.

Build 223 is the most recent public release. DSD 512 capability was in Build 216. Just update your existing installations or fresh install from the Downloads page.

Finally going to get a chance to test the updated upsampling. I just have a question. When you upsample multiples of 48 to 256, does it upsample to 12.288Mhz only, or can you also set it to upsample to 11.289Mhz?

I think it only does final “44.1 x” dsd rates no matter the source pcm sample rate.

Okay sounds good thanks. Our DAC only has a 22.579Mhz clock, so that’s a good thing

Thanks for info, do new builds exist for ex. in the Google Play Store for downlood from there or must be downloaded from Roon page and placed in a usb stick to update on tablet with it ?
thanks for support
Pedro

The Android build in the Playstore and the iOS build on the AppStore are both up to date with Build 223.

I think it only does final “44.1 x” dsd rates no matter the source pcm sample rate.

That’s correct. @brian has mentioned that support for 48x rates is “in the queue.”

If I have Auto Volume Leveling ON - can I safely set SDM gain adjustment to 0dB?

Or are they two completely separate things? As in Auto Volume Leveling is only working on the PCM format and SDM gain adjustment strictly on the DSD format? 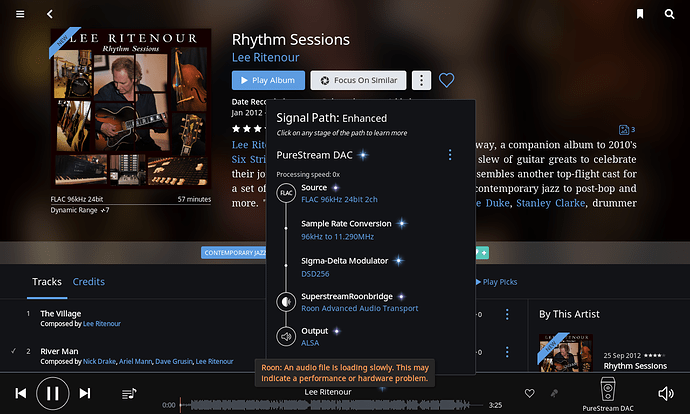 Is anyone having issues upsampling multiples of 48 up to 11.29Mhz?

I have no issues doing this running the current versions of MacOS and Roon Server.

He’s running Roonserver on Arch. I still haven’t tried myself to see if I could duplicate the situation.

Wondering if others feel the same or have had the same experience… maybe it’s just my dac (Unison Research CDDUE) but I keep going back and forth with my opionion whether I prefer upsampling to DSD, PCM (max) or disable altogether and let the dac itself do its magic and that’s where I am at this moment (using the minimum phase filter).

DSD seems to give a fuller sound, but sacrificing detail and bottom end punch (need to turn the volume of my tube amp up too much, and I find the amp sounds better at less volume)… I find it curious that I’ve never really confirmed one way or another, which I prefer.

The one thing I can confirm is that the CD portion sounds superior than any file playback method. Just offers more open (airy) and detail (especially with piano and acoustic instruments and not so much a difference with rock stuff).

Every DAC is designed so uniquely that everyone’s user experience will be different. Best thing to do is use the settings that sound best to you in your system. You’re the only one who can provide that answer for you.

I just find it interesting that I keep going back and forth as it changes from time to time.