In the case of SSD for roon music storage use its less of an issue as the SSD is predominantly in a DATA READ ONLY mode. This is not the case for Roon ROCK or Nucleus boot drives and are probably rather actively being written to often.

Couldn’t agree more. I live in a country that has numerous power outages , either planned (“load shedding”) or unplanned.

We are seeing normal domestic appliances taking the strain , our dishwasher needed a new board etc. Even surge protection plugs are failing , I suppose they are meant to.

If you can afford a UPS use one. Also research battery life , the deep cycle batteries suffer longevity problems if run down too low . And they are not cheap to replace maybe annually !!

We have 2 UPS one on PC’s the other on AV stuff. We rarely use them to “run” kit just to allow graceful shutdown. The only exception is occasionally to keep the router/modem on power to provide internet access.

Has a root cause been established for the M2 failures in Nucleus devices? I seem to have another. The lack of information from Roon on this topic is concerning.

The SSD inside would have cost 4 times more (6 if it was a Samsung MLC, and much more if you bought it from Apple) on a per-GB basis, and a p/e cycle of probably 3 times more (i.e. much better).

So, the answer to the question in the thread title is this: price pressure.

I have been advocating the use of Samsung 970 to be a boot m.2 SSD for a while now, but this happened. Again. 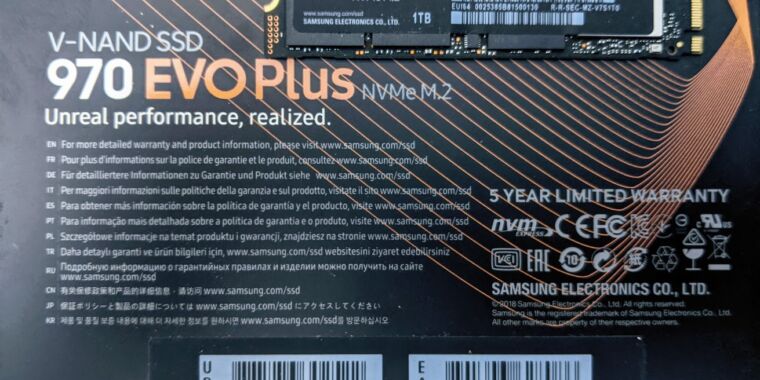 Samsung seemingly caught swapping components in its 970 Evo Plus SSDs

The Phoenix controller in Samsung's own product images isn't present on newer drives.

Not good. Perhaps buying something like the 970 Pro like @Rugby uses is safer, but that of course is much more expensive, for good reasons.

I agree with Peter and Daniel’s observations regarding boot SSDs. The boot drive holding the operating system of a computer is continually accessed and undergoes many read/write cycles during normal operation.

But I think there is a place for SSDs with lower tolerances, just not as boot drives. SSD longevity is measured in write operations. Read operations are regarded as trivial and not contributing to SSD wear and tear. So a write once, read many use is one where a lower tolerance SSD could be used without significantly increasing failure rates. Music storage is exactly such a use. Obviously it would continue to be prudent to have a backup of music files in any event.

Danny posted this some time back, WRT Trim mainly but his comment is implying writes are kept to a minimum on the Boot Drives for Rock/Nucleus

Does ROCK use TRIM on USB SSDs? ROCK

Ther is no distro upon which ROCK is based. It’s a built-from-scratch system. First the compilers are built, then those compilers are used to build every byte running on the system from source. The bootup, the rootfs, and the typical process table looks very different from any other distribution. We do not trim external drives at all. We also do not trim the database partition on the m.2 SSD, nor do we mount with -o discard. These both lead to performance issues. One might think this degrade…

Why there seems to be a rather high failure rate on Nucleus would perhaps appear to be something to do with the source/manufacturer for these units of the m.2 SATA component (not NVMe that I am aware of) so this is something Roon needs to chime in on.

@wizardofoz I’d rather not see this thread gets unlisted, again.

Clearly there is some issue so just unlisting this thread is not going to resolve anything.

I have no idea how may Nuclei have been sold or the percentage of failed SSD’s in the field - but certainly there have been a spate of them showing up in the community and 2 just this week, and while I have seen many of these posted and the treads get taken private (Im OK with that as resolution is best done one on one).

This is not the reliability of an appliance that I would expect - yes I own a Nucleus too and its rather old, used much as a Roon endpoint with HDMI to my AVP (use a windows Core now), but we are also seeing Rev B units with only a few months of operation failing too - so this leads me to suspect a supplier defect perhaps on the SSD’s being used.

Well if SSD suppliers/manufacturers can’t be trusted, eg, Crucial and Western Digital selling QLC as TLC, or Samsung using an inferior drive controller, I‘m not sure what we (or Roon) can do about it. Sad situation really.

Buy MLC drive(s) when you still can.

Roon says they’ve received my Nucleus for SSD replacement (no power issues, it just died after two months). I’ve asked for a refund, but so far they’ve said that 30 days was it.

What they currently seem to be ignoring me about are these questions:

Anybody have any ideas on these? Thanks.

as long as it’s as good

The issue being, it is not good enough for the task, clearly.

Some of them don’t fail. That’s great, but hardly a recommendation.

Keep it backed up.

This BTW has nothing to do with it. It is their supplied SSD running Roon, period. No internal library. A backup of Roon OS does not help in this situation.

I am not new to streaming. I’m running it on a Mini as I was before getting the Nucleus. Thanks for the advice, but it is largely non-responsive to the issue of the thread, or my questions that Roon is not answering.

They have replied they are using a different model SSD for replacement.

its a worry…personally I think Roon being a heavy database process its writing and updating the SSD a lot, this will wear on SSD’s more than most applications on domestic desktops.

This applies not just to Nucleus but ROCK and also Windows and MAC installations. but ultimately it might just come down to inferior SSD’s supplied on many of the Nucleus machines.

Personally I use Samsung Evo SSD’s on my cores

Sure I read that Roon is designed to minimise SSD writing for ROCK/Nucleus (that being the process that wears SSDs). Probably in the White Paper or something @danny posted?

The db is loaded and running in memory, which would be part of that. Of course if you don’t have sufficient memory then disk attack…

They’re possibly cooking? Akasa fanless cases include a 'Thermal module (for M.2 SSD) ', and some M2 SSD’s have on board heatsinks, I’m not sure if a Nucleus does this. Pure speculation though…