How Roon Works With Obscure Music?

hi im very interested in roon i have a very large collectoin of 6tb of flac files my concerns are my music which is of the gothic rock and darkwave genre which i dont think there would be much info my question is how would roon tackle this i have standered releases,some of the music is limited releases from the bands also some bandcamp releases which have not had cd releases,i also have files made from my records and tagged by me.
will i still be able to play all my files in roon even if roon doesnt find the info?
another question regarding my files,i have all my music files stored under one big file called music which has seperate files for each band and a file which contains all my compalations will this way be ok for roon?
hope im making sense look forward to any replys.
thank you
gary

Regarding how Roon would tackle your obscure collection, I would suggest - badly, until Roon is updated to allow full metadata editing, at which time you could manually correct any errors and personalise your library. The word on the street is that this update (and more) is coming, though I don’t know the timescale - there seems to have been more of a focus on marketing and “endpoints” recently.

Roon may well however likely identify correctly a large proportion of your library if its not too obscure.

Regarding playback, you can always play the files in Roon, no problem there.

thank you for your reply,so ill be ok playing any file in my collection if roon doesnt find any info on certain files?how would i set this up would i need to set roon to a special view?
basically im after a good music player which will play my files gapless and the info part is a good bonus,ive had various players like logitek squeezeboxes which have struggeled with my large collection.
thanks again
gary

As an Australian I have a fair few unidentified albums, but my collection is under 1TB so not a patch on yours.

In relation to your specific questions:

I hope you tryout Roon. I think you will be pleasantly surprised at how far the metadata goes (but I’m certain your collection will go further). I would make the following suggestions:

There will be some things Roon doesn’t get right. You will doubtless find examples of bands with the same name having albums incorrectly attributed. That sort of thing can be fixed by Roon’s metadata providers when reported, but it does seem to be a very slow process.

One handy feature is that Roon flags any albums it can’t identify, so it’s easy to see which ones it has a problem with. I’ve got mostly classical mainstream CDs and Roon has failed to identify only 44 out of the 807.

As @extracampine says, full metadata is coming and playback shouldn’t be a problem.

I’m myself listening a lot of groups very exotic, in gothic, indepedent group, extreme, electronic etc… Also I buy group on bandcamp see picture below, Roon will recognize the group, set a picture if you have one on the folder, the only thing which will miss are information related with others groups of your library etc … which is the interest of Roon but no issue in listening if you are on audio format supported by Roon. I have also a big library close to 7To (the core Roon is on a NUC 4Go Memory and Athom cpu) it’s working without any issue. 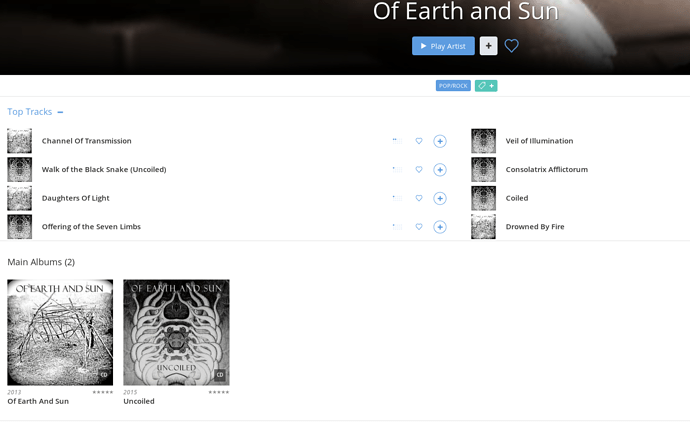 I have many CD’s recorded from live music events I help run. (Properly mixed) I edit as much data as I need in the id3 tags. This Roon reads correctly and groups the albums alongside the artists main releases as expected. I add my own covers too from pictures I have taken at the event.

You can’t get more obscure than that, having albums that are one of less than ten that exist in the world. They will never be ‘Identified’ in Roon terms.
I am looking forward to having Roon recognising more of the supporting artists details and allowing me to use my own chosen reviews.
Chris

thank you andybob you have cleared a lot of things up for me,my file structure is file directory music which has seperate folders for each band and in each band folder are folder for each album.
as for compilations ive got a folder just called comilations instead of a band name.
im a fan of nick cave and [&] the bad seeds which could come out either way in roon,
thank you
gary

cheers chrisbyrd just what i was hopeing for.

i too have a lot of gigs were i have tagged and added my own pictures so im glad roon will add them to the official releases.
thank you chrislayeruk
gary

If you fill in recording dates and a release date, Roon puts them in order too.

Regarding how Roon would tackle your obscure collection, I would suggest - badly, until Roon is updated to allow full metadata editing, at which time you could manually correct any errors and personalise your library

You’re already able to prefer your own metadata over that of Roon so I think this is a little harsh, especially in @gary’s case given he’s already done the heavy lifting re tagging the way he likes and all that remains is to see what Roon provides and decide which parts of his own metadata (if any) he prefers.

[quote=“andybob, post:4, topic:5802”]
Roon can handle a 6TB library, but I would suggest starting off with a 1 or 2 TB subset of your library to check things out. @audiomuze has a large library and did something similar. He may be able to comment or make recommendations about testing Roon on a large library.
[/quote]I initially added only a subsection of my library to get a feel for how Roon does things. Once I knew what to expect I pointed it to my full library. It’ll handle 6TB with ease. Roon’s database is actually incredibly quick when one considers the amount of metadata involved… last time I looked my database was ~ 21GB. To ensure maximum performance I’d recommend that you run Roon on a SSD drive.

Yeah, it probably was a little harsh. But I have had lots of issues with Roon grouping together artists with the same name that shouldn’t be grouped together, with no way to untangle them. Just keen to get full metadata editing, including adding reviews for where they are missing