@Charles_Snider Allow me to add the UX to your UI…

UX to your UI

But seriously, this UI is NOTHING to be proud of. Looks awful. 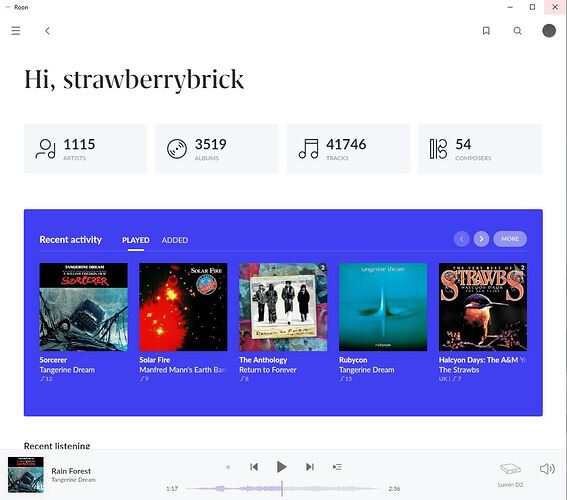 I’ve been using 1.8 since it was released last week, and I’ve had no issues with performance or stability. Actually, I think the search performance is much better now, and the iOS apps are working fine for me. For far, I am enjoying it. I don’t particularly mind the UI changes, although there are definitely features that need to be reworked/re-enabled, e.g. star ratings, tagging/playlists, and Roon has already said they are listening to the feedback and will make a lot of these changes soon.

I say give them a chance, they are listening to the feedback and 1.8 will only get better.

The replacement is showing things according to popularity.

Do you know if that is roon user base popularity or some other popularity metric from other sources? Nothing scientific, I just tried a few albums with both roon and Qobuz and got very different recommendations. I was surprised. I don’t know if Qobuz is using expert curators or a machine algorithm like roon.

I can’t speak for @Albert-Philip_Burger, but I can supply you with my comments:

I agree with both of these and use Playlists a lot. I was just probing on his use of the word “nightmare”.

Your second point is getting fixed.

On the album covers - they appear in a playlist on a laptop or PC, but not in iPhone or iPad. I have a Playlist thread here:

I don’t know. The assumption, based on some of the top track recommendations, is that it is something done by Valence. Replies from Roon devs imply this is something they can tune:

Hey @GoldenSound @Martin_Zupancic – it would be great if you guys could give me some examples of artists where you’re not getting the top tracks you expect. We did some analysis after these initial posts and I definitely agree that there’s room for improvement.

A few examples of where you feel like our lists are coming up short will be helpful as we work on improving these recommendations.

On the album covers - they appear in a playlist on a laptop or PC, but not in iPhone or iPad.

Particularly annoying because I use Playlists specifically on one of my systems, and my control app for that system (for a number of reasons) happens to be an iPad.

Presumably, this is just an oversight and will be corrected in an imminent release?

Yes, that’s exactly what I am going to do. Sign up for a one year license, so I have another 30 days for “trial”, because If I go lifetime during the 30 days, I won’t have any additional costs to the 799$.

My hope is that there’s another update in this time period so I can see how Roon reacts to all the criticism and what gets changed / fixed first and what does not.

I’ve had this happen quite a few times… I have to relaunch the app several times and eventually it won’t crash.

I did note that when this does happen, I usually have several other apps running and available memory is usually below 2GB.

Or, you could do monthly for a while.

Hey @Cameron_Oatley @Martin_Zupancic – it would be great if you guys could give me some examples of artists where you’re not getting the top tracks you expect. We did some analysis after these initial posts and I definitely agree that there’s room for improvement.

I could send them a truckload if still required. Pls. Let me know

Of course I could, but since I expect to go lifetime in the end, I don’t want to spend any penny more than necessary

I am not in a hurry

Depends on the device. I have them on desktop but not iphone.

hahahaha, finally iOS and Windows users can feel just a few % of the pain us Linux users have felt the whole time

I have not had a single issue on Linux with 1.7 or 1.8 that I thought was related to Linux. Rock solid, fast enough, no glitches. Wine is great and thanks to Roonlabs for not breaking it. What pain?

The problem with basing recommendations on popularity is what is the source of the popularity index? Is it the popularity of the track or album on TIDAL? Is it based on how many times I’ve played it? And all of that only reinforces a confirmation bias or heard mentality. Great music might be decades old and is no longer popular so you won’t want to use TIDAL popularity to provide recommendations. At the same time, how do you uncover gems that may not fit into what I normally listen to but will go “Hey, that’s cool!” I could go on about this, but recommendations are things I think we’re all attuned to taking with a grain of salt. Sometimes they’re good, sometimes not.

Yes, good points. I don’t know what Valance is doing. I did find in 1.7 that I was getting very different results depending on context. For example, here were two recommendation views and also two radios depending on whether you were using local or streamed content. Some of the 1.7 recommendation logic worked for me, some of it didn’t.

I haven’t really had time to look at all the new 1.8 options, mostly I guess because access is different and they are no longer to hand how I normally use roon. I have briefly scrolled down and looked at the recommendation panel. Haven’t really got an opinion yet. Nothing popped up I liked the look of. Qobuz found something for me though. I’ll try again later. I’m a big fan of recommendation and radio tools and tend to use them a lot if they make sense.

On the same theme:

My I disagree here ?
I can understand the logic behind this change in 1.8. Showing icons with a composition appears faulty, since a composition has no icon per se. What 1.7 was doing is picking up the icon from the first available recording in the library, a totally arbitrary choice if you happen to have many recordings of a composition.

Only composition recordings can be correctly linked to an icon, and that is what 1.8 is doing on the “All recordings” section of a given composition page.This is correct.

I agree with you that 1.8 could show the number of recordings for a given composition, broken down in “Local/Tidal/Qobuz”.