The new Mac Mini doesn’t allow any upgrades of RAM and don’t have Quad Core chips.

I’ve just bought a NUC with loads of RAM and a small M.2 hard drive solely for Roon, it can live in the cellar and run Linux (if I can work out how to get that configured) and RoonServer.

How fast a machine you need is going to depend upon how many albums you’ve got. I’d over spec just in case.

I have also have a NUC just because it was convenient. I guess I might have gotten a more powerful computer by putting it together myself, but I’m sure it wouldn’t have been as small or as power efficient and would have had to work really hard to make it as silent.

I’ve done both; I’ve built all my own computers (desktops, server and HTPC) over the past ten years, but a month ago I bought an Intel NUC specifically for Roon and to run our Home Automation system.

I bought an Intel NUC6i3SYH. So it’s a Core i3, and there’s room in the case for a 1TB 2.5" HDD to hold my media. An i3 with 8GB is perfectly adequate for my collection (1,000+ albums). See Suggested hardware for more info on sizing.

I should add that the NUC lives in a cupboard along with another (much bigger) server, so Roon serves endpoints over the network. The NUC does have a fan, so if you were to have it out in your listening room, that’s a consideration you need to take into account. Although it’s quiet (in my perception), fan noise is a very personal thing, and what is acceptable to one person will drive another to distraction. I think if I were to require a Roon all-in-one in the listening room, I might look to building a fanless unit, with media held on SSD. Not likely to be cheap…

Thank you for all these replies.

Regarding the size of my library, I actually have 818 albums (which is not a big library). I have another 1,000 albums waiting for me on a hard drive (this is the result of a crashed computer), and I usually add between 10 to 20 albums to my library each month. So by the end of 2017, I could have a library between 2,000 and 2,500 albums. I guess it is wise to get a computer that will be powerful enough to run Roon with a library of about 3,000 albums.

Is your NUC really silent, in the sense that it would be possible to have it in your listening room? Maybe this is already your setup, but I just want to make sure because this is a real concern for me. Thank you!

If your library is sized at 3,000 albums, and is an all-in-one, then reading’s Brian’s post, it seems to me that you should be thinking about an i5 rather than an i3. I can happily use an i3 because I’m running RoonServer on my NUC, and not full Roon, and my collection is currently smaller…

Thank you for your reply! True: fan noise is a personal thing. I might not be able to know if a NUC is really silent without trying it myself.

I should have said from the beginning that I intend to install RoonServer - not the full Roon - on this computer (and to control Roon with my tablet).

Just replaced a 2012 Quad Core i7 Mac mini with a NUC6i5SYK this weekend. Really silent and two times smaller than I expected.

Running Linux and purring along quite happily – even upsampling minringFIR/ADSM7/DSD256 in HQ Player without a hitch. Given the current resell value of a QCi7 mini, I’ve got about €300 to spare. Yay - more endpoints!

Any views on speed relative to the Mac Mini?

Is your NUC really silent

I do know that it’s much quieter than the drive.

The NUC 6i5SYK w/ an M.2 SSD running Linux blows away the Mac Mini. It’s such a huge difference in performance. I recently switched my home system, and Roon feels so much nicer.

The machine got a bump in specs, but the Mac -> Linux bump was probably a bigger deal.

Note: I’m only running Roon Server on it. Same as I was with the Mac.

The mini wins in hardcore number crunching (the NUC won’t do non -2s poly sinc filters in HQP, as was expected).

For day-to-day Roon (connecting, browsing, searching, playing) the NUC is at least as fast, and oftentimes feels faster. Anything is instant or near-instant with a library of ~17K tracks, including search.

RAM use is ~1,5GB – and that is with a graphical desktop running for HQP.

Thank you, this helps me! The noise of my actual USB drive does not bother me, so if the NUC is quieter than the drive, it should be okay.

I’ll let you know when I get my new Skull Canyon tomorrow.

Might take me a year-or-so to set it up though, I’m not a Linux expert.

you need my RoonOS image

I really gotta figure out how to release that

Yes! Do! We all know I need microRoon in my life. 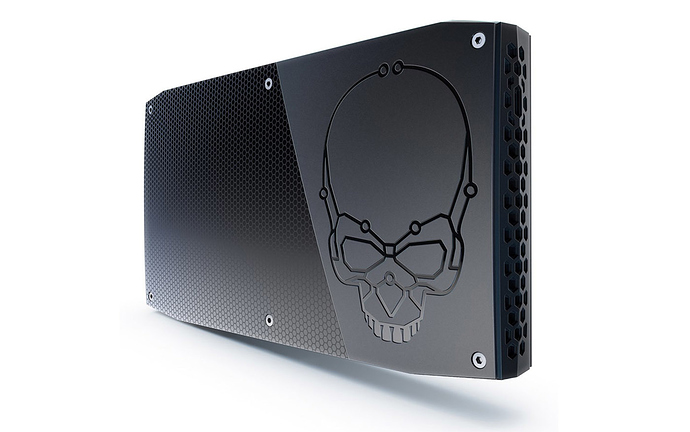 Beauty is in the eye of the beholder. Having said that, I also think that it’s not a pretty sight. I’m sure it will appeal to gameplayers though…

I’m using a DIY computer with great results. It’s a recent i3 with 16GB of RAM. The primary O/S is FreeNAS/OpenBSD which I use as my NAS for my Macs’ backups. I also run Plex in a jail. I’ve installed a Debian virtual machine that is allocated 1 core (really one thread of the four available - 2 cores each with 2 threads) and 2GB of RAM.

I have never seen utilization go over 20% no matter what I am doing. My current heaviest load is running backups to the NAS, streaming a 1080p movie in Plex and running four audio streams concurrently to different endpoints.

I highly recommends the DIY. You can run Debian and Roon on an i3 with 4GB RAM. I looked into the NUCs but the price/performance is not great. Both they and the Mac Mini use mobile processors which are much slower than desktop CPUs.

If you are worried about interference, just place your computer as far away from your stereo as you can. I run my DAC in my office on a 15ft USB cable to keep a good distance between it and the computer (a Mac Pro).

I bought a Intel NUC 5i5. I put in a smallish M.2 SSD and 8 Gigs of RAM to run Roon headless. My music is stored on a QNAP NAS. Because the NUC is in my listening area I decided to buy a fanless chassis. Even before I bought the fanless chassis I really could BARELY hear the fan of the NUC, when ran which was very rare. However, my audio paranoia got the better of me (and it was worth it) and I bought an Akasa fanless NUC chassis (Newton). Absolutely silent. I can put that thing anywhere and I’m not concerned about RF or noise. Works TERRIFIC. I bought another NUC to run the Roon interface, rip music with dBpoweramp as well as run PLEX and rip DVD’s. All wired to to my home network.

All of your options will work, each with tradeoffs.

My 2 cents. But this is my audio Nirvana.