I can’t say for sure why you dislike Tidal in the way it presents itself as a music streaming but I can agree when you come to contents streaming Tidal is still a bit behind from Spotify. However, Tidal offers exclusive contents and HiRes MQA not found in others streaming partners which are the plus points here.

The only thing I keep away from Spotify is they still stream in lossy format!!! Their idea of streaming music is based on a ‘free music model’ with ads. I think every artists will tell you, their hard works are not for free!

Tidal is the best streaming system in Roon. It’s also the only streaming service for Roon. If there were other streaming services available in Roon, it would be easier to evaluate the choices, but for now, Tidal offers hi-res and MQA both in and out of Roon. Deezer is the only other service I have used which was lossless, and I liked it too. Have to give Tidal credit for partnering with Roon, which is probably a relatively small niche in the market. There are tradeoffs using many products. For me, Tidal Roon is pretty darn good.

Yes: Tidal brings good stuff to the table that I would love to like – and Roon integration is unsurpassed and never-seen-before (or after). For me, the exclusive content and the current crop of MQA are of little to no interest. This may very well be different for anyone else.

As for Spotify: I went Premium the day it arrived over here. I don’t particularly care for anything that is free (there’s always a catch) – and I really don’t need to be bothered with ads when listening to music. At 320, the quality is quite alright – surely for background/discovery/car/on-the-go/holiday/etc. For relaxing times, make it Suntory time – with Roon.

I admit I found the Tidal push of modern rap/hip-hop music annoying at first. However, Tidal serves up quite an eclectic catalog at CD-quality or better. The sound quality is much better than Spotify and the selection is good. I learned that you can go into a specific genre (e.g., jazz) and get a tailored set of new albums listed.

I agree the discovery function is not as good as Spotify but I’ve found it more rewarding to discover new music by looking at what other Roon users are sharing, blogs like Stereophile’s “Records to Die For”, etc.

MQA is a nice bonus even if it is only for some of the artists I like to listen to.

How do you do this? In Roon, or here (community)?

How do you do this? In Roon, or here (community)?

What we are listening to [20xx] Music

Cancelled Tidal today too. I’ve been trying to like it because of the integration with Roon. Maybe part of the issue is that I ONLY want to access it from within Roon. If I’m looking for something specific it’s usually pretty good, although sometimes it fails miserably. Search for the track, “Blinded by the Light” if you want a laugh. It pulled 50 search entries but neither the hugely popular Manfred Mann’s Earth Band nor the original Springsteen version. Seriously, try it. The biggest issue I have (and one I’ve kept hoping will be fixed is the very heavy focus on Rap/Hip-hop and pop. What they need is a setup that allows you to check genres you are interested in seeing or not seeing and then use that filter across their different screens. The “What’s New” tab has no albums or playlists I’m interested in. The Tidal Rising tab has nothing. Playlists lists moods, which is fine, but no genres. You have to genres, then pick on, then go one by one to look at playlists and albums. How much nicer would it be to have the What’s New and Tidal Rising tabs be populated with all the genres’s I’m interested in? There is just too much music nowadays for this type of interface. I’m hoping that this eventually gets improved or that Roon gets a second choice, but at this time I feel like I’m wasting the $20 a month.

Hi Derek, maybe Deezer would be worth looking at. Tidal has working well for me, but I had good luck with Deezer as well. Works on Sonos, Play-fi, desktops, etc.

I do not use Tidal, for a number of reasons, some already given above:

I subscribe to Google play music for discovery & listening on my phone outside my home. My girlfriend uses Spotify. I often cast YouTube videos, or other sources…

It has been said before, but I would find it so convenient to have a “plugin” that would enable casting music to a Roon endpoint outside of the roon applications.
Right now I have to switch inputs and settle for a less qualitative input on my amp to be able to stream other sources.

Aside for this limitation I am perfectly happy using roon only for my personal library.

Instead of trying to get roon to integrate various services, why not get those service to build a “cast to roon” function? I am sure this is technically perfectly doable…

Any Deezer + Tidal yet? I want to use a single interface and I’m sticking with Roon at the moment since it does a great job of accessing everything on my local server. I already have Amazon and Google Music via other subscriptions but I never even look at them since they aren’t integrated into a unified interface.

I use Tidal Hifi for 2 reasons:

1 - Roon integration is perfect. Cannot ask for more. In fact, this is the main reason for having both Roon and Tidal

YMMV. That is just me.

Can you find the MQA tracks from within Roon? I’ve never been able to figure out how to do it. Within the web browser, I could do it though.

Can you find the MQA tracks from within Roon? I’ve never been able to figure out how to do it. Within the web browser, I could do it though.

No you can’t . Go to Tidal Desktop, what’s new, then masters tab. Add them there as Favorites (it should take about 20 minutes to browse through the list).

I then went back to Roon, created a “Tidal MQA” tag, tagged all “new” albums as such, and then Done!

I’d like to try that. I’m on the website (assuming it’s the Tidal desktop) but not seeing Masters anywhere under What’s New. I see Featured, Tracks, Albums, Playlists, etc. Is Masters a sub category?

The desktop is an app/programme. You have to download and install it.

You have to use the Tidal desktop app. Then go to what’s new, Albums and look across for masters. Then view all. Only it’s not all. There are more.
Add them as your favourites then in Roon, re sync with Tidal. Done.

Thanks. I got that to work. I’m going to assume that the reason you can’t do this from the web app is because there wouldn’t be anyway to play back the albums? Still adding another program just to do this reiterates my point about how weak their interface is. They could create a genre called MQA and then we’d be able to browse it from Roon. I will agree that there are some good albums on there though.

Here’s a weird thing. I added a bunch of MQA albums. I see them in Roon under the Tidal Favorites tab. I can play them from here, but while doing so, the triple-dot menu in Roon won’t let me add a tag (the option is missing). I don’t understand this, but not really Tidal’s fault. I can go into albums and sort by date added and then tag them. One other thing I found is that Roon was hiding some of these albums as duplicates (despite having a higher bitrate correctly noted). I had to let Roon show all duplicates then tag them then re-hide the duplicates. Odd behavior but working.

If I’m looking for something specific it’s usually pretty good, although sometimes it fails miserably. Search for the track, “Blinded by the Light” if you want a laugh. It pulled 50 search entries but neither the hugely popular Manfred Mann’s Earth Band nor the original Springsteen version. Seriously, try it.

Just as when performing a Google search, it pays to be specific with your Search terms

E.g. within Roon, I clicked on the Search icon in the top right hand corner…and entered “Manfred Blinded” as the Search term [as I consider both Manfred and Blinded to be relatively unique search terms, whereas e.g. “light” would not be as ‘unique’]

Entering the above Search term, results in the Screenshot below within a second…and see that it went directly to the Tidal tracks option, as I don’t have that version in my own Library…see the Search term on the top line of screen

I read somewhere on ComputerAudioPhile that Tidal has over 500,000 Albums and 9 million tracks available…and it’s worth noting that even within the Tidal app itself, that the above Search terms returned the required track within a second…and the same would apply to an album 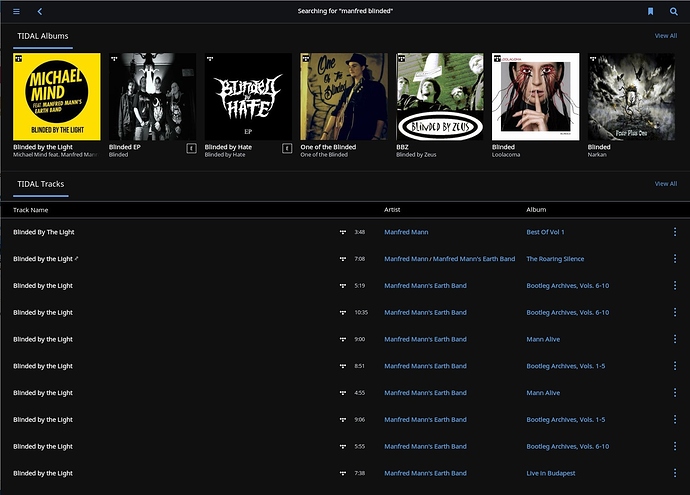 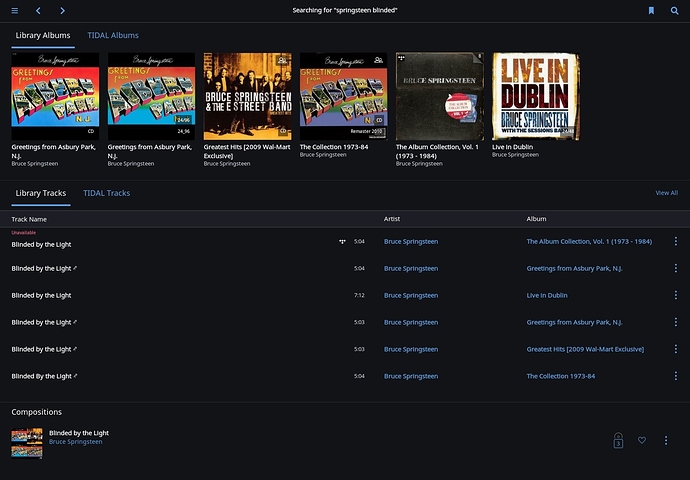